Lady in the Car with Glasses and a Gun (Blu-ray)

Posted in: Disc Reviews by Brent Lorentson on April 25th, 2016 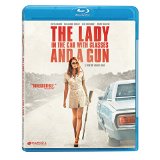 Besides the fact that The Lady in the Car with Glasses and a Gun has one of the most excessive titles that I’ve seen since Things to Do in Denver When You’re Dead, the film just might be one of the most bonkers I’ve seen as well.  Not only was the film a remake from back in 1976, but it is also based off the novel from author Sebastien Japrisot.  I’ve never seen the first film, nor have I read the book, so when I came into viewing this film I came into it with few to no expectations.  Going by the trailer I had figured this would be just a simple straightforward thriller; I couldn’t have been any more mistaken.

When we meet Dany (Freya Mavor), she comes off as an insecure woman who seems to want nothing more than to be beautiful and to eventually get to see the coast and view the sea.  It’s hard to sympathize about the beauty part, because despite the halfhearted attempts to have Dany appear unattractive, you’d have to be blind to not notice her beauty.  It reminds me of the 80’s cliché when the girl was considered ugly, that is until she removed her glasses and let down her hair, and then like magic she goes from ugly duckling to the most beautiful girl in school. It’s silly how we still see this in film, but nevertheless that is what is going on here.  Dany is a meek secretary who is itchy for a chance to step out of her shell as she fantasizes about her boss.  And it’s when a chance opportunity comes to visit his home and work there over the weekend that she further dreams about the possibilities that can unfold.

Michel (Benjamin Caravaille) plays Dany’s mysterious brooding boss.  He uses his charms to get Dany to do what he needs to have done, and when he asks her to take him and his family to the airport, he knows she’ll do it.  Dany may seem hesitant at first, but between it being a request from her boss and having the opportunity to drive his beautiful green Thunderbird back home, well, it’s a deal impossible to say no to.

It’s on the drive back when Dany makes a impulsive decision to head to the coast, rather than back home, that we immediately expect something to go horribly wrong.  It doesn’t take long before things start to get a little strange, as people approach her as though they have crossed paths before.  As this continues with more frequency, as viewers we get to debate if she is crazy or if there is something more sinister at play.

From early on in the film, we are given some stunning visuals and a unique editing style to help tell the story.  It’s a style that feels very retro to the 70’s while giving us a dreamlike quality that tells the viewer to not be so trusting of everything we may be seeing on the screen. Along with the visual work we also get a very curious soundtrack that helps move the story along; the music helps give it a very Giallo feel as the synthesizer work is very distinct to the old-school works of Bava and Argento.

Despite its attempts to be visually appealing and a great soundtrack, it’s not enough to distract me from the ridiculous story that unfolds.  I’m fine with suspending my belief for a film, but the story has to at least connect the dots in some sort of logical fashion, and this film just completely goes off the rails by mid-film.  Even when the film attempts to explain itself, I was sitting there thinking, “They can’t be serious, can they?”

I know some of you may be wishing I’d divulge just a little more, but to be fair, it’ll only just pose more frustrating questions.  Does it work as a thriller and keep you guessing?  You bet it does, but again when you get to the payoff, and when they literally break it down for you and even go so far as to give a mini-diagram, you’ll still be scratching your head wondering what they were even thinking.

The Lady in the Car with Glasses and a Gun is presented in the aspect ratio 2.39:1.  The 1080p image is arrived at with an AVC MPEG-4 codec at an average of 24 mbps.  Despite the very stylish appeal of the film, a lot of detail seems to be lost in many of the wider shots.  When we are given an assortment of close-ups the detail is there, but it’s surprising we don’t get a crisper image.  The film is still beautiful to look at due to the imagery, but it seems to come off more as a long music video rather than a narrative film.  The whites at times have an issue of blending, and there are a lot of brighter shots here.  When the film shifts to darker locations, it seems to lose a lot of depth as well.  There were no artifacts or compression issues to be seen.

The DTS-HD Master Audio 5.1 track is in its original French track along with subtitles that are thankfully easy to read.  For the most part, though, it is the music that is the driving force behind this film; there is an even mix between modern music and a score created by Agnes Olier.  The dialog does come through clearly and concise, but it’s the subtitles I paid more attention to; even with the subtitles explaining how the events unfolded, I was still scratching my head.

The Man in the Car with a Pen and a Camera: (26 minutes) This is an interview that certainly has its awkward moments.  I’m used to seeing the fluff pieces where everyone is praising one another, but here we get the director being very candid about how the producers were upset with how director Joann Sfar was making the film.  There’s a lot of information in this segment, and it does shed a lot of light on the project, though nothing that would change my feelings towards it.

The Paintings of Director Joann Sfar- This is exactly what it sounds like; it’s the director spending a few minutes showing off some of his paintings.  Really does nothing for the film, but fans may enjoy this.

This is a film that frustrates me; I really enjoyed the start of the film, and I appreciated its style and camera work, but the hollow attempt at being a sneaky thriller is just plain bad.  Had this film just stuck with the altercation of a certain incident involving the car and the film moving forward from there, it would have been fine.  But the story just had to be too clever for its own good.

Brent Lorentson is a horror writer and film critic based out of Tampa, Florida. With a BA in Digital Film, he co-wrote and co-directed Scavenger Hunt. His short stories have appeared in various horror anthologies. In 2019 his short script Fertile Blood will be a part of the anthology horror film Slumber Party. He is currently working on his first novel A Dark and Secret Place set to be released in late 2019. Favorite Films: Taxi Driver, Fight Club, I Saw the Devil, The Wild Bunch, Dawn of the Dead, A Clockwork Orange, Pulp Fiction, Heathers, The Monster Squad, and High Fidelity.
Elvis & Nixon Veep: The Complete Fourth Season (Blu-ray)