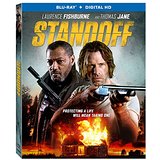 The setup is actually quite elegant in its simplicity: a man protects his house — and the terrified little girl who bursts into it one day — from a cold-blooded killer. Despite becoming a bit tedious in its middle section and a little improbable during the finale, Standoff absolutely lives up to its title. The movie is carried by a pair of strong lead performances and subtly effective stylistic touches from its first-time director.

“What’s more important: the life of a stranger or the future of your family?”

The inciting event in Standoff involves death at a funeral. A ruthless contract killer named Sade (Laurence Fishburne) murders a group of people attending a burial at a cemetery. Unbeknownst to Sade, there’s a little girl in the same cemetery named Isabelle (Ella Ballentine), who is visiting her parents’ grave. Isabelle — who prefers to be called Bird — happens to be carrying a camera, and she gets a few shots of an unmasked Sade. Unfortunately, Sade spots Bird, murders her adult companion, and begins chasing down the girl to kill her.

Bird runs into the only house in the area, which is occupied by down-on-his-luck veteran Carter (Thomas Jane). After taking a bullet to the leg, Carter surprises Sade by delivering a painful buckshot to the killer’s midsection. What follows takes up the bulk of Standoff‘s 86-minute running time: Carter camps himself on the second floor at the top of his staircase with only one bullet left. Sade patches his wound and alternately tries to manipulate, intimidate, and otherwise convince Carter to give up the little girl, who is the only other person in the house who has actually seen his face.

As you can see, writer/director Adam Alleca has constructed a pretty effective cat-and-mouse premise for his feature film debut. The fact that Carter, Sade, and Bird spend the great majority of the movie’s running time in a single location gives the story a claustrophobic, minimalist quality that is quite effective. (It’s pretty easy to imagine Standoff being staged as a play.) But beyond that, Alleca comes up with a few bits of shot-making that firmly plant the story in the cinematic realm. (Carter cuts a striking figure silhouetted against the staircase.)

Alleca also dedicates a decent chunk of time exploring each man’s psyche: flashbacks eventually reveal the traffic accident that left Carter without a family and constantly clinging to the bottle, while Sade gradually reveals information about himself in an effort to get his rival to give up the little girl. The battle of wills between Carter and Sade becomes so pronounced that keeping Bird alive almost becomes secondary. (At least until the finale suddenly thrusts her into the middle of the action.)

The action does tend to sag and devolve into little more than intense trash talk at times, but even those slow patches are redeemed by strong performances. Jane is quite good as the wounded (both emotionally and  physically) Carter, and the actor makes for a tragic hero worth rooting for. Unfortunately for Jane, he doesn’t get to have nearly as much fun as Fishburne, who gets to tear into the scenery both figuratively and literally. Sade — the character’s name might be too cute by half — speaks in florid, profanity-laced monologues that would make Samuel L. Jackson salivate. Fishburne seems to relish the chance to play the sort of unabashed heel who’d give Ike Turner a run for his money. Ballentine is convincing as a scared little girl with some steel in her. There’s actually not much to the rest of the cast, except for an unlucky, inexperienced police officer who knocks on Carter’s door during the standoff.

Naturally, there’s some preposterousness you have to overlook in this sort of movie. (Lucky for Bird/unlucky for Sade, she happened to run into the home of an exceedingly resourceful farmer/veteran.) It’s also more than a little convenient that Bird’s predicament gives Carter a shot at redemption by protecting a little kid. But if you can overlook that and the occasional flabby bits of smack talk, you’ll find that Standoff makes for a solid, down-and-dirty little thriller.

Standoff is presented in an aspect ratio of 2.40:1. The 1080p image is arrived at with an AVC MPEG-4 codec at an average of 26 mbps. The movie’s opening moments feature a muted palette that matches the gloomy mood of the story. (Those early scenes feature a funeral and a dispirited Carter at home.) However, the overwhelming majority of the action takes place inside Carter’s shabby house, which is decked out in appropriately depressing browns and earth tones. Yet what the visual presentation lacks in vibrant colors, it makes up for in strong fine detail (Carter’s weathered face, Sade’s nasty wounds) and deep black levels (there is impressive shadow detail once night falls). Overall, this is a pretty good (if unspectacular) effort from Lionsgate.

The DTS-HD Master Audio 5.1 track is actually a slight notch above the visual presentation. There is good separation right off the bat: dialogue is confined to the front speakers, while Austin Wintory’s score and ambient noises harmoniously share space in the rears. There are also some dynamic bits of directionality, like when a seated Sade tosses an item off-screen and it lands with a thud in the right rear speaker. The firepower here might be limited for the sake of drama, but the gunshots we do get are presented with an impactful pop, even though sub activity is pretty negligible.

A Fight to the Death — The Making of Standoff: (7:03) Writer/director Adam Alleca talks about penning the Standoff script while he was in college, but hanging on to it so he could direct it himself one day. Fishburne reveals that he actually enjoys working with first-time directors, while the rest of the cast and crew heap praise on the movie’s theatrical/stage play aspects. An effective featurette that makes me wish there were more bonus material. Presented in HD.

In an age where it seems like the only movies that get any run at multiplexes are franchise films that routinely sail past the two-hour mark, Standoff offers a bit of tight, tense relief.

The premise might be simple, and the story becomes strained a few times. However, the performances are good and there’s enough tension here for me to recommend you check this out if you’re looking for a quick, no-frills actioner that you can forget about as soon as it’s done.

The Bible Stories: Samson and Delilah The Green Room