The Bible Stories: Samson and Delilah 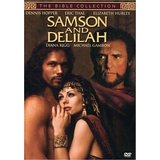 “To all things, there is a purpose. It was the time of judges. The Lord had punished the children of Israel for their sins against him. He had delivered them into the hands of the Philistines.”

The timeframe of Samson and Delilah is around 1075 B.C. Samson, like many characters in the Bible, is chosen by God but is far from perfect. The stories of many characters in the Bible are ones of sinners, and they must always try to overcome their flaws with God’s help and intervention. Samson was given the strength of 100 men and was chosen to deliver the Jewish people from their oppressors, the Philistines. Samson grows up knowing that he was chosen, but he is not ambitious and is somewhat vain and lustful. His general nature is good, and he is often pulled in different directions. Samson’s parents, Mara (Diana Rigg, The Game of Thrones) and Manoach (Paul Freeman, Raiders of the Lost Ark) want to protect their son from the war that is to come. A village girl, Noemi (Jane Arikan) represents those who want to spur Samson to fulfill his destiny. Samson is portrayed by two actors, Jonathan Rhys Meyers (The Tudors) as the young Samson and, in greater detail, Eric Thal (The Puppet Masters) as the older Samson.

The Philistines are represented by Re Hamun (Michael Gambon, Professor Albus Dumbledore from the Harry Potter series), General Tariq (Dennis Hopper, Easy Rider), and Delilah (Elizabeth Hurley). Re Hamun’s son and heir is constantly pleading for violence, war and oppression, while Tariq counsels for tactical decisions that are wiser and more prudent. Re Hamun listens to both sides hoping that Tariq’s wisdom will be passed along to his son so when his time comes to take the throne he won’t make foolish decisions. Re Hamun knows their rule over the Jews is aided by the belief that they should wait for deliverance by a warrior sent by their God. Tariq knows that Samson is possibly this warrior and seeks to neutralize him. Tariq suggests using Delilah as an avenue to find his weakness. It is unclear in this movie if Delilah is the king’s wife or just a kept woman of the court, but that doesn’t stop her from accepting money to be Samson’s temptress. Samson is easily tempted, and Delilah constantly uses all her wiles to get him to reveal his weakness.

The 180-minute presentation is not one of the stronger ones in the series (two of which, Abraham and David, I have previously reviewed for this site). The story is too meandering and unfocused to sustain the three-hour length. It winds up being repetitive and listless before we reach the climax which most people in the world already know. That is not to fault the actors, especially Dennis Hopper. Hopper’s character is full of shades of grey and a struggle between practicality and conscience. Hopper’s performance is one of the better ones I have seen him give. Michael Gambon is also excellent as the king.