Posted in: Disc Reviews by Brent Lorentson on April 28th, 2016 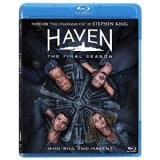 Based on the story “The Colorado Kid” by Stephen King, the SyFy series Haven comes to its end with the last 13 episodes for the final season. When we were last in Haven a fog bank surrounded the small coastal Maine town and Duke (Eric Balfour) accidently unleashed all his “troubles” upon the town.  Things were not just looking bad for the town; in fact this may be the darkest days they’ve had to encounter.  Would 13 episodes be enough to wrap up all the loose ends and finally allow the town of Haven to be normal, or would this take a darker turn and dare to leave the town to suffer its doom to the mysterious Croatoan?  Well, I’m not about to spoil anything, so rest easy, fans, but I should say that not everyone is going to make it through this alive; in fact, I can say this season kept me on edge from start to finish.

With no escape from Haven and half the town infected with “troubles”, the town goes under the command of the Order with Dwight (Adam Copeland) stepping up to take charge.  As you would imagine with the Order taking control, this is the equivalent of martial law going into effect, but with so much chaos going on, the town is practically a war zone.  These are the darkest days Haven has experienced, and in the second episode of the season, “Power”, we see Audrey Parker (Emily Rose) and Nathan (Lucas Bryant) take on a trouble that kills whoever is caught in the darkness. If that wasn’t bad enough, the power plant is shutting down, and the generators at the school where everyone is huddled around the light, well, the generators are not going to hold up long unless someone comes up with a plan.

It also seems that they have saved some of the best episodes for last, as I have no problem saying this is the best season of the series. As the season unfolds and we start to understand who and what Croatoan is, it is as though it were a final puzzle piece that connects all the mysteries of the show from over the years.

While Haven is dealing with the chaos, Duke is the one person who was able to escape the fog bank and is attempting to live a life free of “the troubles”.  What is in Duke’s favor in forgetting Haven is that outside the fog bank no one even knows what Haven is; it doesn’t even appear on any state map. But for Duke, we know he can only leave Haven behind for so long, and with the help of a certain paranormal investigator, he does what he can to find his way back to Haven and understand where he fits in with the town’s looming fate.

The final season introduces William Shatner (yes, Mr. T.J. Hooker himself) to the show.  When I first saw advertisements for his appearance on the show, I thought it would be nothing more than a walk-on part and be a gimmick, but instead he actually has a substantial part.  There are a few other appearances throughout the final season, none that I wish to spoil, but what I will say is there is no wasted talent.

I think the one thing that makes this season stronger than the rest is that the writers and all involved went into this knowing how much story they had to tell in a somewhat brief amount of time.  There are no throwaway episodes this season; everything matters, and the stakes are raised pretty high this season.  Some may be a bit put off by how dark the show may get at times, but the show does have its moments of levity.  If I had any complaints, it’s that it does get a bit tiresome when the characters feel the need to remind the audience of everything that is occurring.  I suppose when you watch this week to week sometimes you may need a reminder, but when you are doing a binge watch, when characters feel the need to re-explain why they are in dire need… Seriously, how many times do we need to hear them say to one another no one can leave the fog bank…or how “troubles” work?  Aside from this minor nitpick, the final season of Haven delivers and thankfully wraps up its story in a fashion where fans should be pleased that all questions seemed to be answered.

Haven The Final Season is presented in a 1.78:1 aspect ratio.  The 1080p image is arrived at with an AVC MPEG-4 codec at an average of 32 mbps.  Personally I love the overall look of this show, the heavy blues and grays along with the desaturation that helps give Haven its distinct look. This season, though, we are taken to different worlds and realities, and each has a unique look as well.  Though the colors overall are muted, the drab conditions fit the New England seaside locale, while the keeping with the fact that the entire season the town is trapped inside a fog wall.  In the “Enter Sandman” episode we see the world in bright colors, and they come through bright and dreamlike.  In contrast in the “Blind Spot” episode we have a large portion of the story told through security footage, laptops, and camera phones.  Though detail may get lost, it’s worth it considering we’re seeing the show tell the story in a unique fashion.  With no digital artifacts to be seen and some nice black levels, Haven is a good-looking show.

The DTS Master Audio 5.1 track is on par with all the previous seasons.  The surround sound is most notable when the show is experiencing a more action heavy scene where the foley work is on display.  Whether it’s the bass being utilized for the explosions caused by “troubles” or gunfire, everything is well balanced.  All the audio is clear, and really for a little sci-fi show this is pretty good quality.

Audio Commentaries:  Each episode comes with a commentary with cast and crew. There is a lot of information here, so for fans of the show, if you are looking for Easter eggs and more insight to your favorite show, these are all worth giving a listen to.

Mythology Refresher: (04:08) This plays out more as an extended trailer for the show as it shows us highlights from the past seasons.  It doesn’t offer us much, but for those who may have spent some time away from the show, this is worth a watch to help remind you of the fun from episodes past.

Haven Origins: Lovers Conquered All: (8:36) Back to the early days of Haven when it was becoming settled; a young couple is in love, but one of them has a “trouble”, and it doesn’t seem to settle well for the settlers.

Haven Origins: Trust Kills Fear (10:41)  Another short film, but this one shows how far-reaching the “troubles” get as we see a soldier befriend and try to help a “troubled” girl escape a detention center in 1946.

Haven Revisited: (11:17) A live stream segment where cast and crew answer questions from the web.

Haven Archives: Entries From the Crocker Diaries: (6:31) Narrated journal entries discussing the troubles and events occurring in the early years of Haven.

“Inside Haven” Featurettes: (40:36) This is a misleading feature, because really all there is to this is cast members giving a brief synopsis of what went on plot-wise in the show with a little insight as to why their characters may care about what is occurring.

Interviews: We get a collection of interviews with members of the cast that gets into their feelings about the show and its last season.

While it’s sad to see the show come to an end, I can’t be any happier with how the talent in front and behind the camera came together to give the fans a much-deserved finale.  This is a show I went into with low expectations, but at this point this is a show that I already look forward to re-watching from start to finish, not as a critic but as a fan.

Brent Lorentson is a horror writer and film critic based out of Tampa, Florida. With a BA in Digital Film, he co-wrote and co-directed Scavenger Hunt. His short stories have appeared in various horror anthologies. In 2019 his short script Fertile Blood will be a part of the anthology horror film Slumber Party. He is currently working on his first novel A Dark and Secret Place set to be released in late 2019. Favorite Films: Taxi Driver, Fight Club, I Saw the Devil, The Wild Bunch, Dawn of the Dead, A Clockwork Orange, Pulp Fiction, Heathers, The Monster Squad, and High Fidelity.
Tuesday Round Up: April 26, 2016 The Bible Stories: Samson and Delilah