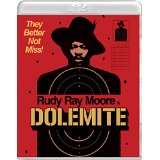 “I’m gonna let ’em know that Dolemite is back on the scene!”

Rudy Ray Moore can’t act to save his eternal soul. In fact, everything about Dolemite makes an Ed Wood film look like a Cecil DeMille epic masterpiece. So what is it about this cheap blaxsploitation film that gives it legs over 40 years after it was first released? If I could truly answer that, I would have the answer to Life, The Universe And Everything. What I can tell you is that when I found out that Dolemite was coming here to be reviewed, I couldn’t hide that big wide grin on my face for hours. I was just a kid the first time I saw the film. One friend asked me what kind of parents I had that would let me watch a movie like that as a kid. My answer is usually, “Who said they knew I was watching it?” The real truth is that my Pop was probably sitting right next to me when I did. He was a sucker for schlock… the badder the better, and it don’t get no badder than Dolemite.

“He’s bad. The man is out of sight. His name is Dolemite.”

As the film opens, we find Dolemite (Moore) in a prison cell being called to the warden’s office. There he finds the warden with his friend Queen Bee, played by Lady Reed. Dolemite had been framed by cops and a street thug named Willie Green (Martin) who took his club and his pimp business while sending Dolemite to jail. All along he has professed his innocence. Now the cops are ready to believe him. Why? Because apparently crime didn’t go down when Dolemite went up the river; in fact, it’s actually gone up. Naturally, it must not have been Dolemite committing those crimes. Laugh, if you want; in fact, the film will encourage that kind of a reaction, because this is the kind of flimsy logic on which the Dolemite empire of entertainment has been built. The Warden has a deal. Dolemite can go free if he’ll work to bring down Willie Green and any other criminals he can get his hands on. And just like that, Dolemite is on the street, and the mayhem begins.

There’s no actual story from this point forward, just a series of scenes that allow Moore to play out his tough-guy character. He reunites with the hookers in his stable. Queen Bee has had them trained in karate, so now they’re not just cash machines (ATMs weren’t around yet) but a sexy squad of assassins. Along the way Dolemite has to deal with dirty cops who want him back in prison, a corrupt mayor who is actually the brains behind the Willie Green gang, and a few street vendettas that are in need of violent settling.

It’s all just an excuse for gratuitous sex and violence. No one is claiming to be making high art or serious movies. You get an overdose of bullets and boobs, and the price of admission is to leave any pretense of logic or plot behind when you enter.

It’s all part of a greater movement in the 1970’s. The blaxploitation films were made on the cheap with mostly black cast members for the black community. Whites in these films were usually buffoons and idiots, much like the adults of a John Hughes film would be. But something rather remarkable happened as the genre was playing out in small movie houses and drive-in screens across the country. Instead of being offended, the white audiences jumped on the bandwagon and flocked to the films as well.

They made good money because they didn’t cost very much to make. Dolemite was made for about $90,000, a small budget even in 1975. Moore financed the film almost on his own with the profits from the Dolemite party records he was making at the time. Some consider Moore to be the original rap artist. He would use music to back his wild monologues that became the personality of the character Dolemite. You get a taste of these performances when the character does a fundraiser performance. The records sold, and Rudy Ray Moore and Dolemite became pretty much one and the same. Once the film was made, it was almost impossible to find a distributor. It was banned in several countries in Europe, and most executives who saw it knew it for the truly bad film it was. What no one understood is that it was that certain kind of bad that was explosively funny and entertaining. Who knew audiences would not only accept the bad acting and production values but would come to actually embrace that kind of filmmaking? Fortunately someone knew, because Dolemite did find itself released, and people lined up for blocks to see it.

Enter Vinegar Syndrome with a long overdue release of Dolemite on Blu-ray. The film might not have been as popular as the more mainstream entries in the blaxsploitation genre, but it stands up there with films like Shaft as an icon of the style. The Blu-ray is the product of a 2K restoration, and it looks as good as it has any right to look, which is pretty bad. We’re talking cheap film stock and guerilla film techniques on the streets. The disc does remove the artifact issues of earlier format versions of the film. It still looks bad, but the issues of age have been removed from the equation. You can even watch a full-frame version called a “Boom Mic” version that allows you to see some of the flaws of the production a bit more clearly. This kind of budget didn’t allow for multiple takes, so if a boom mic got into the frame, so be it. It’s a bit of history that I’m very happy to see preserved here. It’s not for everyone. But you should at least give it a try. This is the best chance you’ll get.

Truth is, it’s a cult of personality, and the only thing that matters is Rudy Ray Moore. It’s a call to arms from the street. There were two sequels, but none reached the cult status of the original film. Moore would milk the character his entire life, and why not? You get the extras from the DVD that include interviews and a look at the locations then and “now”. You can also watch the film reel by reel as it was presented in theaters 40 years ago. It’s a nice little release that will remain on my video shelf, and I recommend it for yours. It’s the best horrible movie you’ll ever see. “And I ain’t lyin’.”

Gino Sassani is a member of the Southeastern Film Critic's Association (SEFCA). He is a film and television critic based in Tampa, Florida. He's also the Senior Editor here at Upcomingdiscs. Gino started reviewing films in the early 1990's as a segment of his local television show Focus. He's an award-winning recording artist for Omega Records. Gino is currently working on his 8th album Merchants & Mercenaries. Gino took over Upcomingdiscs Dec 1, 2008. He works out of a home theater he calls The Reel World. Favorite films: The Godfather, The Godfather Part II, The Body Snatcher (Val Lewton film with Karloff and Lugosi, not the pod people film), Unforgiven, Gladiator, The Lion King, Jaws, Son Of Frankenstein, The Good, The Bad And The Ugly, and Monsters, Inc.
Hot in Cleveland: Season Six Backtrack (Blu-ray)