Posted in: Disc Reviews by Brent Lorentson on May 4th, 2016 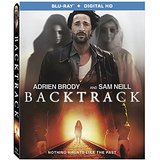 Whatever happened to the days of telling a story without having some kind of gimmick or need to have to have a twist in the plot to show the viewer just how clever you are?  I blame The Sixth Sense for this, because ever since the film came out it seems a requirement to be considered a thriller is you have to have some kind of twist, whether it’s at the midpoint or towards the end, somehow you have to find a way to jam that twist in there.  I’m not saying let’s just throw the ban hammer down on all twists, but they should be used to only further the plot, because at this point it’s just gotten silly, and when you start piecing things together after the film you realize how little sense it all makes.  When it comes to Backtrack, you’ll need to do more than just retrace your steps on this one, and it’s sad, because beneath all the twists there is a good story here; unfortunately it’s managed to lose its way.

Peter Bower (Adrien Brody) and his wife are mourning the loss of their daughter who was killed in an accident.  Peter carries the guilt around with him, and it has begun to have an effect on how he is able to treat his patients.  Very early on we are given clues to there being something not right with his patients up to the point it is discovered that all of them are dead.  While this may seem like a spoiler, instead it’s key to driving the story forward for Peter to understand why the dead seem to want to make time for him on his couch.  While I’m fine with this idea of him treating ghosts or simply Peter being insane, there is a practical question that bothers me.  How does no one else notice how odd it is that he is treating, to the outsider, no one?  How were they going about paying for visits or even scheduling visits, since it seems he doesn’t have a receptionist?  It seems like I’m being nitpicky, but really, I was having a hard time accepting the reality of the story that was being presented.

As the story continues, Peter finds himself returning to the home where he grew up to uncover the mysteries of his past and find the connection between the ghosts that have been his patients and the spirit of a mysterious child.  While all the pieces begin to come together, I just can’t help wondering how a character can forget so much.

Adrien Brody does his best to carry this film, and his performance alone is what helps make the story all the more believable, but is it possible for him to speak up?  He’s a guy who can give a lot through body language, but I had to crank up my volume just so I can hear the dialog exchanges clearly.

Where the film suffers most is simply being cluttered with several ideas, but there just never seems to be a connective bond.  Maybe I’m wrong and it’s just a movie that I just simply can’t connect with, because even after a second viewing I just found myself unable to sit back and just enjoy the film, because the questions I had just continued to nag at the back of my mind.  Can the casual viewer sit down and enjoy this?  Of course, sometimes being a critic is something I wish I could easily turn off and just immerse myself in a film for 90 minutes.  This is a film I’d love to hear other people’s reactions to, because there is a part of me that still really wants to like this. On a technical level there is nothing wrong with the film.  I feel as though Backtrack is the girl I went on a date with, and though nothing went wrong, there just wasn’t a connection.

Backtrack is presented in the aspect ratio 2.40:1.  The 1080p image is arrived at with an AVC MPEG-4 codec at an average of 27 mbps.  For the most part the film is a relatively dark film; even in times of daylight it always appears to be overcast.  While it fits the mood of the film, there is a lot of detail that is lost here.  While the black levels do offer a bit of separation, it’s simply a by-the-numbers look.  The skin tones look fine throughout, but overall there is just nothing that stands out, though thankfully there are no compression issues.

The DTS-HD Master Audio 5.1 track is a frustrating one; the dialog comes mostly from the front, and as I mentioned above, it is pretty low by normal standards (on average I play a Blu-ray at 11-14, but for this disc, to hear the dialog it was at 26).  The problem comes when some of the side speakers are utilized, for instance when a train passes it’ll scare the living daylights out of you, and you’ll quickly adjust the volume, but then you’re back to not being able to hear the dialog again.

The Psychology of Backtrack: (5:25) Basically this is a brief interview with some cast members and the director, and director Michael Petroni discusses how he came up with the story for Backtrack.

While the film has its flaws, it still manages to be an enjoyable film.  This is the kind of film that would work best when scrolling through Netflix and there is a nasty storm outside.  It has its creepy moments, and a few jump scares, but I wouldn’t go into it expecting more than that.

Brent Lorentson is a horror writer and film critic based out of Tampa, Florida. With a BA in Digital Film, he co-wrote and co-directed Scavenger Hunt. His short stories have appeared in various horror anthologies. In 2019 his short script Fertile Blood will be a part of the anthology horror film Slumber Party. He is currently working on his first novel A Dark and Secret Place set to be released in late 2019. Favorite Films: Taxi Driver, Fight Club, I Saw the Devil, The Wild Bunch, Dawn of the Dead, A Clockwork Orange, Pulp Fiction, Heathers, The Monster Squad, and High Fidelity.
Dolemite (Blu-ray) Captain America: Civil War