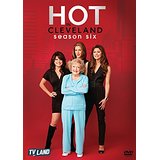 “Oh crap…I’m going back to Cleveland.”

I had never seen a single episode of Hot in Cleveland before I sat down to review season 5. So why did it feel like I’d been watching this show my entire life? Turns out, it’s entirely by design. On the surface, it doesn’t seem like I’m the target audience for Hot in Cleveland: I’m under 50 years old, and I’m a man. But if you look beyond the plastic surgery jokes and geriatric humor, you’ll find a show that aggressively channels (and ultimately appeals to fans of) many of the classic, multi-camera sitcoms of the past. In other words, Hot in Cleveland — which wrapped up last year after six seasons and 128 episodes — feels like you’re watching re-runs of a show you’ve already seen…and still enjoy plenty.

“Goodness…that woman’s a bit of a disaster.”

If you’re familiar with Hot in Cleveland, you know that sentence can refer to almost all of the main characters on the show, which continues to follow the misadventures of three middle-aged women from Hollywood who reinvented themselves in “The Land.” Melanie Moretti (Valerie Bertinelli, One Day at a Time) is an eternally optimistic writer turned radio host; Joy Scroggs (Jane Leeves, Frasier) is an English beautician who, erm, has enjoyed the company of many men and was torn between three suitors in the season 5 finale; and Victoria Chase (Wendie Malick, Just Shoot Me!) is a self-centered soap opera star who finally won her coveted Oscar in a tie with Helen Mirren, who remains off-screen, but soon squanders that momentum. The only one who has her act together is sassy, 90-something Elka Ostrovsky (Betty White, The Golden Girls), who was elected to the Cleveland City Council at the end of the previous season. (Let’s just say her rise to power doesn’t end there.)

The season 6 premiere/“Comfort and Joy” centers around Joy deciding which marriage proposal to accept. (Tim Daly doesn’t return as Mitch, but Dave Foley and Craig Ferguson recur as quirky P.I. Bob and caddish Simon, respectively.) Joy’s love life is a major point of emphasis throughout the season — and a consistent source of snarky barbs from Elka — all the way up to the series finale, where she marries the man of her dreams. Meanwhile, Victoria parlays her Oscar win into a co-starring role alongside Brad Pitt (sorta) and a starring role in an HBO drama; neither project works out as well as she might have hoped. Melanie continues to spar with radio co-host Franky (Will Sasso) and support her friends. Finally, Elka tries to use her newfound political juice to raise Cleveland’s profile, but gets embroiled in a scandal. (Ep. 13/“Scandalous” is actually an homage to ABC’s Scandal.)

That nod to Scandal is just one of the many ways Hot in Cleveland unabashedly celebrates television. In addition to the main cast — Bertinelli, Leeves, Malick and White collectively have more than 600 episodes of TV comedy under their belts — season 6’s parade of guests include familiar faces from TV’s past (Carol Burnett, George Takei, Bob Newhart, Garry Marshall) and, um, the somewhat more recent past (Mario Lopez, Ernie Hudson, Thomas Gibson, Rhys Darby) along with a few music stars thrown in for good measure (Huey Lewis, Gladys Knight). What might be considered desperate stunt-casting on a different show is instead a crucial part of Hot in Cleveland‘s DNA. Mackenzie Phillips briefly turns up to reunite with One Day at a Time co-star Bertinelli; Elka is revealed to be an intense “Password” player, which is especially funny if you’ve ever seen White (who was married to “Password” creator Allen Ludden) play the game in real life.

Hot in Cleveland was TV Land’s first original scripted program, but the network has since shifted to single-camera shows like Younger (starring Sutton Foster) that don’t rely on nostalgia. (It’s hard not to see the title of the latter show as a mini-slap to the face.) Prior to Hot in Cleveland’s debut, the network pretty much consisted of comfort food reruns and the show doesn’t stray far from that formula. The punchlines and plots are predictable, but they’re delivered with wit and energy from a cast that has great chemistry.

In addition to scene-stealer White (who truly looks like she could go another six seasons ), the rest of the cast has appealingly grown into their characters by now. Bertinelli’s strikes a nice balance between sweetness and kookiness that keeps Melanie from being boring. Leeves’ gift for physical comedy and willingness to have Joy be humiliated is a constant source of humor, even if she was never totally believable as a bawdy Brit. Malick’s portrayal of a vain, out-of-touch actress isn’t groundbreaking, but it remains damn funny in her deft hands. Foley gets more screen time than most male guests on this show, and I enjoy his good-natured pompousness. I also laugh any time Georgia Engel’s pops up as Elka’s soft-spoken cohort Mamie Sue.

Season 6 sees the gang temporarily return to California (Ep. 2/“Fear and Loathing in Los Angeles”), spend Christmas together (Ep. 7/“Cold in Cleveland: The Christmas Episode”), and take part in a triple wedding during the two-part finale (Eps. 23 & 24/“Vegas Baby”; “I Hate Goodbyes”).

Hot in Cleveland: Season Six features all 24 episodes on three discs. Although there is no bonus material listed, Ep. 22/“Hot in Cleveland: Hot Damn!” functions as a show retrospective featuring bloopers, table read footage, and comments from the cast and crew. The series finale features a nice bit of symmetry as the gang is once again unexpectedly waylaid during a flight to Paris. (An emergency landing is how they wound up in Cleveland in the first place six years earlier.) Although each of the women gets a romantic happy ending, the not-so-subtle message is that they were loved and supported all along. “In the long run, I think you guys are the long-term relationship I was destined for.”