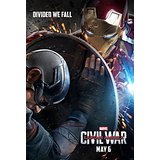 When I was a kid we had something called a toy box. Do kids even have such things anymore? Inside we were supposed to keep our toys when we weren’t playing with them. Inside mine there were dinosaurs, cars with track, army men, spaceships … and yes, superheroes. To open the toy box meant to prepare yourself for imagination and fun. Sure, the box got crowded after a while, but I was always filled with some kind of anticipation when I looked inside. Today going to see a Marvel movie is very much like lifting the lid on a toy box. There are so many cool things inside that it kind of staggers the imagination these days. It’s a delicate clockwork with an ever-growing number of moving parts. So many, in fact, that it appears impossible that any of them can be given enough attention so that they can develop and grow. That’s usually what kills most comic book film franchises in the end. Filmmakers try so hard to outdo the one before that the only way they believe it can be done is to add more pieces until it all topples from its own weight. Captain America: Civil War has more moving parts than ever before, but just when you think it can’t possibly get any better…it does.

The Avengers are on another mission doing the things that superheroes do. When the mission goes a bit sideways, a delegation from the African nation of Wakanda are killed and injured. For the leaders of the American government and many members of the United Nations, it is the last straw. The UN gathers to ratify a new set of laws called the Sakovia Accords, named for the nation so devastated in the Ultron battle of the last Avengers film. Feeling guilty, Tony Stark has become a relative spokesman for the Accords and tries to talk his comrades into signing the document. It calls for UN oversight on all super beings. The need appears to be accented when a bomb explodes at the signing ceremony and the culprit appears to be Bucky Barnes. Catching the Winter Soldier will be the first test of the power of the Accords, but Steve Rogers is not quite convinced the case is so cut and dried. He also has serious doubts about the Avengers being controlled by an outside organization. Naturally, this is going to create sides.

The Accords are supported by Tony Stark/Iron Man (Downey, Jr.), Black Widow (Johansson), Roadie Roads/War Machine (Cheadle), and Vision (Bettany). The team will also be joined by newcomers T’Challa/Black Panther (Boseman), who has a personal vendetta against the Winter Soldier when his father, King T.Chaka (Kani) is killed in the explosion. Tony also manages to pull in young Peter Parker/Spider-Man (Holland), who is more celebrity-struck than actually on anyone’s side.

The opposition is supplied by Steve Rogers/Captain America (Evans), Clint Barton/Hawkeye (Renner), Wanda Maximoff/The Scarlet Witch), Sam Wilson/The Falcon (Mackie) and Scott Lang (Ant-Man). Of course, Bucky Barnes (Stan) is on Team Cap. The two sides square off reluctantly, but that doesn’t mean they don’t pack a lot of power. There is an airport battle that takes up a ton of running time. Here we get to see the all-out war take place with glorious splash pages moments.

Marvel keeps the action from getting stale by providing some really nice development of all of the established characters. You’ll get new tech and new moves from pretty much everyone. They also play these characters with the understanding that their feats are becoming somewhat routine. You’ll see someone push a plane or truck with just a flick of the wrist as if they’ve been doing this now for a good bit of time. It’s nice to see they have grown individually as well as as a team. You’ll find the best side-by-side action here in any comic film to date. The powers play well off each other, and this team, while divided here, is showing signs of the incredible force to be reckoned with that it will have to be to face the Infinity Wars (or whatever the heck the two films end up being called).

But it’s not just the action that has evolved here. The film leads us to one of the most powerful emotional points in the franchise to date. Robert Downey, Jr. and Chris Evans share some incredibly touching moments when the big reveal changes everything about the dynamics of these characters. I’m impressed that we still get this kind of strong human element in characters we’ve seen for years but continue to have the ability to surprise us and pull us into their emotional states. There’s an aspect of the superhero here that Batman vs. Superman only dreamt about portraying. You can get a little dark without completely sucking every ounce of fun from a movie. Trust me. There is surprising darkness here, but it isn’t a one-note brooding portrayal. There’s depth to this angst, and these actors have managed to bring it out in brilliant ways.

The story strays quite a bit from the Superhero Registration Act that instigates the comic version of Marvel’s Civil War, but this fits more into a real-world space and gets rid of so many of the side-stories the comic storyline required countless crossover issues to be told. It’s a simple real world axiom that is often neglected in superhero films, one that Batman vs. Superman tried to capture. Actions have consequences, no matter how well-intentioned. Look at the political landscape today, and you can see that Ben Franklin’s adage about authority vs. liberty still holds us tightly in its grip. There no doubt at all which film did the best job with such similar concepts.

Of course, there are two new important characters here. It’s our introduction to The Black Panther. Chadwick Boseman delivers a regal superhero without the Shakespearean trappings of Thor. I understood The Black Panther the least from my comics days, but Boseman gives us a fully fleshed out force that more than holds its own with these familiar characters.

On the opposite side of the spectrum is Tom Holland as Parker/Spider-Man. I’m a fan of at least the first two Raimi films, but this is the Spider-Man I’ve been waiting for since an 8-year-old kid read his first Amazing Spider-Man comic in the late 1960’s. Holland’s Parker is instantly charming and engaging. There’s some immediate chemistry with Robert Downey, Jr., and I was reminded of everything I loved about the character for nearly 50 years. The costume is the worst Spider-Man film version yet, but you know what? It doesn’t matter. The character is engaging from go and immediately falls into his niche. This film only made me more eager for the stand-alone Black Panther and Spider-Man films. Sony doesn’t have a chance here. This is the best proof yet, as if any were needed, that no one knows Marvel better than…well… Marvel.

Do I have to tell you that the film is loaded with extraordinary special effects? No? ‘Nuff said. Just as was the case with The Winter Soldier, this movie is huge with all of the beats and intimate moments of a small movie. The f/x are huge, but they don’t have to fly at us constantly to keep us engaged. The over two and a half hours fly by faster than a Quinjet with warp engines.

To call this a Captain America movie is somewhat misleading. This is really Avengers 2.5 and is as much a follow-up to that experience as it is to The Winter Soldier. But even with so many heroes, the heart of the movie is very much a sequel of the last Cap film. The relationship between Captain America and Bucky Barnes, who has become the Hydra-controlled villain, is the emotional centerpiece to the entire movie. Yes, there’s a villain in Baron Zemo, played by Daniel Bruhl, and it’s really his machinations that have set these heroes against each other. There’s an entertaining reason here, and Zemo is very different from the pink-ski-capped Zemo of the early comic days.

Most important is that this movie is fun from beginning to end. DC/Warner haven’t figured that out yet in their cinematic universe. It’s rather strange to me, because the television side of that coin absolutely gets it. The Flash is one of the most fun shows on television today. If their movie side ever figures it out, we could very well start having even more fun in those theatre seats. Captain America: Civil War is more fun than people should be allowed to have sitting in the dark of their local Cineplex. This is the best Marvel film to date. “Obviously you can quote me on that. I just said it.”

Gino Sassani is a member of the Southeastern Film Critic's Association (SEFCA). He is a film and television critic based in Tampa, Florida. He's also the Senior Editor here at Upcomingdiscs. Gino started reviewing films in the early 1990's as a segment of his local television show Focus. He's an award-winning recording artist for Omega Records. Gino is currently working on his 8th album Merchants & Mercenaries. Gino took over Upcomingdiscs Dec 1, 2008. He works out of a home theater he calls The Reel World. Favorite films: The Godfather, The Godfather Part II, The Body Snatcher (Val Lewton film with Karloff and Lugosi, not the pod people film), Unforgiven, Gladiator, The Lion King, Jaws, Son Of Frankenstein, The Good, The Bad And The Ugly, and Monsters, Inc.
Backtrack (Blu-ray) The Bear (Blu-ray)