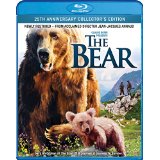 Shout Factory digs into the archives for this one. It was back in 1988 that French director Jean-Jacques Annaud went into the wilds to bring us The Bear. Of course he’s best known for his take on primitive humans in the more successful Quest for Fire. Like that film, The Bear uses almost no dialog. While it appears to be a nature story akin to Disney’s recent Bears, these animals are trained and following a carefully-crafted script based on a novel written by fellow Frenchman Gerard Brach. There is also a small use of stop-action bears that were created by Jim Henson out of his Creature Shop. These exist in only small scenes that do stand out as quite fake. It was intended to use the stand-ins more frequently, but if you watch the film you’ll understand why that decision was eventually abandoned for the trained performing bears.

The story takes place in 1885 in British Columbia. A bear cub has just lost his mother to an avalanche trying to dig up honey from a nest. He’s scared and not likely to survive on his own. His survival is made that much less likely with the presence of a pair of hunters in the area. They already have an impressive collection of bearskins and are on the trail of a huge bear who has, so far, managed to elude them. Once shot, the giant bear goes a bit crazy and rips into the hunters’ belongings and their horses. It’s time to bring in the hunting dogs as this hunt starts to get personal.

The wounded large bear also has a slim chance to survive now. Naturally the two animals meet up and start to help each other. If they can heal and elude the hunters and other wild dangers, they might just be OK. But that’s a huge if, particularly when what usually happens in this situation is the big bear eats the little bear. It’s about destroying another bear’s lineage.

This is far less a nature film and more a French art film. The angles are quite often a bit bizarre. The sounds are obviously being mimicked by humans and are grossly exaggerated. There are a couple of nightmare scenes the little cub has that are like something out of the psychedelic era. In fact, the little guy eats some mushrooms that cause him to seriously hallucinate. The only humans are the hunters who are portrayed quite two-dimensionally. They are somewhat inept and not the kind of guys who really could have survived out here. The confrontation with the hunters that serves as the climax is more than a little bit of a letdown.

About the only thing this film really has going for it is some rather breathtaking mountain views. They don’t dominate the film enough, but at times they are quite spectacular. The bears are cute, but really only because… well…they’re bears. Of course they’re going to be cute. Otherwise the film drags as a story and offers nothing we haven’t seen accomplished better somewhere else.

The Bear is presented in its original aspect ratio of 2.35:1. The 1080p image is arrived at with an AVC MPEG-4 codec at an average 25 mbps. You’re not going to be referring to this high-definition image presentation to accent the abilities of your home entertainment system. It’s an old film recorded in harsh exterior and remote locations. Color and detail fall a bit flat. This is boasted as a 25th anniversary restoration, but I see no evidence of any serious restoration here at all. Print artifacts are many, and there are some serious edit jumps that make it appear frames might be missing. Certainly it’s better than a standard-definition DVD would be, but not by much.

The DTS-HD Master Audio 5.1 is not asked to do much. Occasionally there are some nice orchestrations, but most of the film is free from dialog or score. The animal sounds do not sound real. These are humans doing a very bad job of imitating bear sounds. The little bit of dialog that does exist is fair. The sub actually gets a little too much in places.

The Making of The Bear: (51:28) This is mostly about training the bears. It would bring a protest if done today. The trainers carry big clubs they use to beat the animals if they disobey. One of the trainers even boasts about not being ashamed to show the audience that he uses the club for discipline.

I’m not sure there was ever a market for art nature films in the US. Since the bears are trained and acting, it doesn’t really work as a nature film. The narrative is not good enough to create a compelling story from this film. There are some amusing moments, but they are lessened by the fact that they are completely staged. I’m surprised to learn it was nominated for an Oscar for editing. That makes me even more suspicious of this particular print. It did win a couple of French Film Awards. My advice? “Go. Run away.”

Gino Sassani is a member of the Southeastern Film Critic's Association (SEFCA). He is a film and television critic based in Tampa, Florida. He's also the Senior Editor here at Upcomingdiscs. Gino started reviewing films in the early 1990's as a segment of his local television show Focus. He's an award-winning recording artist for Omega Records. Gino is currently working on his 8th album Merchants & Mercenaries. Gino took over Upcomingdiscs Dec 1, 2008. He works out of a home theater he calls The Reel World. Favorite films: The Godfather, The Godfather Part II, The Body Snatcher (Val Lewton film with Karloff and Lugosi, not the pod people film), Unforgiven, Gladiator, The Lion King, Jaws, Son Of Frankenstein, The Good, The Bad And The Ugly, and Monsters, Inc.
Captain America: Civil War Sing Street