Posted in: The Reel World by Archive Authors on May 8th, 2016 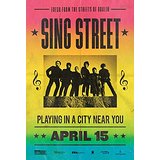 Should you pursue your dreams at any cost? If your life seems bleak and hopeless, should you go for broke and bet everything on what you believe? These questions are even more relevant to people who are creative artists, because they will often be told that their dreams are hopeless and unattainable. The rewards can be great, but the odds of succeeding are easily a million to one. Sing Street takes place in 1985 and is about young kids writing songs and making music videos. The parents, Robert (Aiden Gillian, Petyr “Littlefinger” Baelish from Game of Thrones) and Penny (Maria Doyle Kennedy, Siobhan Sadler from Orphan Black) are struggling like almost everyone in Dublin in those days. They have to send their younger son, Cosmo (Ferdia Walsh-Peelo) to the free Catholic school run by the priests called Synge Street instead of the expensive fee-based school he had been going to. The older stoner brother, Brendan (Jack Reynor, Transformers: Age of Extinction) has already quit college, so that helps out with expenses as well. Before I go any further, I must say that this film strikes a brilliant balance early on between hard reality and dreams and fantasy. It is a funny, touching, and exhilarating entertainment above all else. It harkens back to all those movies over the years like Footloose and Fame that just want kids to have fun.

The 1980’s were when music videos and mainstream rock music really picked up steam. Hall and Oates, Duran Duran, and The Cure are all musical reference points in this movie. Cosmo is struggling to cope with problems at home and problems at the new school. His one bright spot is the beautiful teenage girl who lives across the street from the school. Raphina (Lucy Boynton) is sophisticated and stylish and says she’s leaving soon to be a model in London, but she lives in a home for orphaned girls. Cosmo gets her to believe that he’s in a band and that he’d like her to be in a video. It’s all a lie, but Cosmo soon gets to making it a reality. That’s why most kids want to become musicians, isn’t it? To get the girl.

If I have any complaint about this movie, it’s that the music that the kids make is almost too good and too entertaining, but like I said earlier, the line between fantasy and reality in this movie is very subtle and enticing. The film becomes an honest and heart-filling love story with tons of fun tunes. It is written and directed with songs by John Carney, who had a huge success with the 2007 indie film, Once. Once  became an award-winning Broadway show, as well. He also has the Mark Ruffalo/Keira Knightley film, Begin Again, to his credit. Sing Street is my favorite of the three because it has such a pure heart and impassioned spirit. It is about following your dreams no matter where they lead. The ending is such a breathtaking and unexpected turn that one would never dream would happen. You will leave the theater dizzy with the crazy excitement of young love. That should be worth the price of ticket. For the price of admission you can learn what it’s like to go back to 1985.

The Bear (Blu-ray) The Choice (Blu-ray)