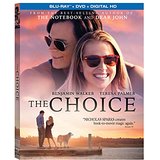 With The Choice, there have now been 11 movies based on the work of mega-selling author Nicholas Sparks. (Eat your heart out, John Grisham.) However, I’m pretty sure that even the most ardent Sparks fan/apologist caught on to the author’s formula about 8 or 9 tearjerkers ago, and practically every one of those clichés is in full force here. But while The Choice calls back to the most successful Sparks adaptation, the movie also explores a less glamorous side of romance that we’re not used to seeing on screen.

“Now pay attention…because I’m about to tell you the secret of life.”

Those words are narrated at the start of The Choice by Travis (Benjamin Walker), a smooth-talking Southern scoundrel who enjoys beer and partying in equal measure. They also instantaneously hamper the movie, which could never ever live up their promise. Instead of any sort of life-shattering revelation, what we get is a pretty standard case of opposites attract as Travis butts heads with new neighbor Gabby (Teresa Palmer), a medical student who is irritated by Travis’ party boy ways. Of course, the more the two bicker, the more they realize they have things in common — including a love for dogs — which leads to a deeper connection. Naturally, there are complications, like the fact that Gabby is already in a relationship with handsome, well-to-do doctor Ryan (Tom Welling). Meanwhile, Travis keeps having to bat away Monica (Alexandra Daddario), a girl from his past that he’s not really in love with.

As you can see, none of this material is breaking any new ground. For the first hour or so, The Choice has a low-key appeal in its simplicity as the action is carried by likable leads Walker and Palmer. The pair are certainly playing familiar parts — redeemable bad boy and his uptight foil — but the pair have a believable, pleasing chemistry. They are also supported by a talented cast that includes Tom Wilkinson as Travis’ widower/veterinarian father Shep. Wilkinson carries on the proud tradition of having a wildly overqualified older actor impart words of wisdom to the young lovers in a Sparks story. (He joins Alan Alda in The Longest Ride, Gerald McRaney in The Best of Me, and a bunch of others.) There’s also Maggie Grace (Taken) as Travis’s sister, but the actress’s unconvincing brown wig is so distracting that I honestly don’t remember a word she said in this movie.

As I mentioned before, The Choice — which was directed by Ross Katz from a script by Bryan Sipe — hits virtually every Sparks-ian checkpoint. (The movie is familiarly set in Wilmington, North Carolina. There is also a rain-soaked date and hand-written letters that play a part in the plot.) The Choice is a bit of a departure for Katz, who made his directorial debut with the powerful drama Taking Chance. Although the filmmaker extracts some solid performances from his cast, he’s mostly doing a facsimile of a Sparks movie rather than bringing anything new or vibrant to the table.

Of course, even when the movie is ambling along during its first half, wily moviegoers — especially those who’ve suffered through their share of Sparks weepies — are wise to keep their guard up. The Travis/Gabby romance gets resolved with well over 30 minutes to go, and I liked that the movie dedicated some thought to what happens after “happily ever after” in one of these romantic melodramas. However, it remains impossible to shake the notion that The Choice still has at least one ludicrous gut punch up its sleeve.

As a result, when tragedy does strike, it feels more calculated than affecting. (At least it’s still not as wildly manipulative as the theatrical ending for The Best of Me, so thank heavens for small favors.) The only question that remains is whether you’ll be crying happy or sad tears at the end.

The Choice is presented in an aspect ratio of 2.40:1. The 1080p image is arrived at with an AVC MPEG-4 codec at an average of 36 mbps. The warm, sun-kissed palette plays very nicely with the vibrant greens and blues here. (Those blues, in particular, standout whenever there’s a shot of the shimmering water.) At the other end of the spectrum, black levels during the handful of nighttime scenes — whether Travis and Gabby are bickering outside their homes late at night or spending time at Wilmington’s Dockside Waterfront Restaurant — feature very good separation. Despite being a slightly more modest production than previous Sparks adaptations, The Choice still brings plenty of coastal eye candy.

The DTS-HD Master Audio 5.1 track is just as effective as the visual presentation. Marcelo Zarvos’ score takes up the majority of the space in the rear speakers during most scenes, but there’s certainly room for storm sounds. (This is a Nicholas Sparks movie, after all…there has to be rain!) Although a hurricane in the film’s final act is really the only time the subs pipe up, this still feels like a full-bodied presentation. There are even decent bits of directionality, like when Travis plays “Black Betty” next door to Gabby and the song blasts from one of the rear speakers. Dialogue is also completely clean in this track.

Audio Commentary with director Ross Katz and actor Benjamin Walker: The opening moments — Walker using the galactic Lionsgate logo to quip about how he didn’t remember filming in space — sets the jokey tone for this track. In addition to the silliness, we do get some useful production details, like the fact that Gabby’s cottage was a set that was built from scratch. The good humor continues even into the film’s tragic final third.

Cinematic Choices — The Making of The Choice: (19:20) Sparks acknowledges that the story in The Choice is a throwback to The Notebook. We also learn this is apparently the first indie Sparks adaptation, though I honestly didn’t notice any difference. (The Choice‘s scenery is as idyllic as any self-respecting Sparks movie.) The cast kind of oversells how funny the movie is, but their enthusiasm for the material is certainly evident.

Choosing Home — Nicholas Sparks and North Carolina: (8:53) Wilmington, North Carolina serves as the setting for The Choice. This featurette is a love letter to the coastal town, which is also where The Choice and other Sparks adaptations have been filmed.

Nicholas Sparks With…: (32:37) Sparks — also a producer on the film — hosts laid-back, good-natured chats with director Ross Katz and stars Teresa Palmer and Benjamin Walker. (Don’t expect anything more hard-hitting than Sparks asking Palmer why there are so many successful Aussie actors in Hollywood.) Features a Play All option.

Molly & Moby — Choice Dogs: (5:47) This lighthearted featurette salutes the two canine stars of the film: Grace (who played Gabby’s dog Molly) and Bolt (who played Travis’ pup Moby, and who Maggie Grace cheekily referred to as the most gifted actor in the film).

Deleted Scenes: (2:47) There are two scenes and they’re both from the film’s downer final act. Maggie Grace and Tom Wilkinson get some additional one-on-one time with Walker’s Travis.

The Choice is easily the lowest-grossing Nicholas Sparks adaptation, so it’s safe to assume some fatigue over the author’s formula has set in at the box office. But while it obviously didn’t click with audiences, I wouldn’t call it the worst film based on a Sparks story.

So if you’re in the mood for a romantic melodrama, you could certainly do worse. Still, I’d probably recommend you choose to do something else with your time.