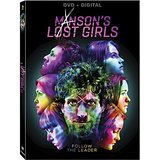 There seems to be so much information and films about Helter Skelter and the atrocities Charles Manson and his followers committed.  Though the notorious Sharon Tate murder took place decades ago, it continues to be a crime that fascinates people to this day.  As interest in the story continues to thrive in the media, whether it be in books or various films, it seems it’s getting harder to find a fresh spin on the story, or at least one that will garner more attention.  Manson’s Lost Girls is a new extension to the story about the events that led up to the fateful night that would forever leave its mark on America pop culture, but does it bring anything new to the table?  Well, it doesn’t present a new perspective on the crime spree, but sadly its execution is a well-polished mess that simply doesn’t add up.

Manson’s Lost Girls starts off strong by introducing us to Linda (Mackenzie Mauzy) who is on the run, attempting to escape Manson and his followers; unfortunately in the process she has to leave her daughter behind.  Yeah, from the get-go we see that Linda is a pretty awful mother considering she seems to have no problem leaving her kid behind with a group of drug addicts and killers, all so she can save her own hide. As a way to grip the audience, this works on getting us into the story, problem is from the start we know Linda is a terrible parent and simply makes it difficult for us to have any sympathy towards her.

The film flashes back to when Linda leaves her troubled life at home and sets off for California. This is where she meets up with her soon to be baby daddy, Bob (Morgan Krantz) who also seems to make nothing but bad decisions once he finds out he’s going to be a father.  As Linda struggles with being a single mom, it’s at a chance encounter at a diner where one of Manson’s girls sees her and helps her out of a jam and brings her to a hippie commune run by Manson.

At this point the film shifts its direction and focuses on the sex-and-drugs lifestyle of the late 60’s.  And when the time comes where we meet Manson, after all this build-up, well, it’s a bit lackluster.  Manson (Jeff Ward) is portrayed more as an eccentric with a hot temper rather than the raving lunatic most of us are used to seeing.  What is somewhat unique about this version of Manson, is that we get to see more of his passion in music and get a glimpse of his dream to be a successful folksinger on par with Bob Dylan.

While the film’s title suggests the focus is just on the women that followed Manson, instead we see his influence over the men in the commune as well.  It’s odd to see (at least with this film) how Manson could ever have such a strong hold over people, because he never seems to really have a grasp at being a strong leader, at least one that people would borderline worship and go so far as to kill for.  His ranting about Helter Skelter is hinted at, but it is never really fully explored, and for me that’s a problem.  The film is supposed to be following Linda as she is sucked into this cult, but there seem to be so many missing pieces that can explain why she’d be willing to break the law or risk losing her daughter for this strange man.

But most frustrating of all is the motivation behind what drives the cult to go out and commit murder.  This gets more into a conspiracy theory than a story told through facts, so for those watching, take the events that unfold with a grain of salt and just enjoy it as Hollywood film fodder.

Visually the film looks great with a very 60’s-70’s film style, but that’s not enough to save this film.  While it’s far from perfect, it’s at best entertaining, but there is so much out there you can be watching instead.  This is one I’d have to skip.

Brent Lorentson is a horror writer and film critic based out of Tampa, Florida. With a BA in Digital Film, he co-wrote and co-directed Scavenger Hunt. His short stories have appeared in various horror anthologies. In 2019 his short script Fertile Blood will be a part of the anthology horror film Slumber Party. He is currently working on his first novel A Dark and Secret Place set to be released in late 2019. Favorite Films: Taxi Driver, Fight Club, I Saw the Devil, The Wild Bunch, Dawn of the Dead, A Clockwork Orange, Pulp Fiction, Heathers, The Monster Squad, and High Fidelity.
Newhart: Season 5 The Witch (Blu-ray)