Posted in: Disc Reviews by Brent Lorentson on May 19th, 2016 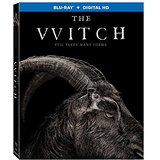 After Robert Eggers received best director out of Sundance, The Witch became a film that went on my radar. Following the release of the trailer to the film I was hooked; its startling yet beautiful imagery was enough to get my attention.  As buzz built around the film as it continued to awe audiences in various festivals, my anticipation for this film was getting out of control.  Could a film really be this great? Is it possible to make a film that still shocks and terrifies audiences?  By the time I found myself getting to this screening, The Witch now was a film that unfairly had something to prove to me, I poked the bear and dared this film to blow me away. As the lights dimmed and the film played out, I came away with more than I asked for.

The film transports us to New England in the 1630’s.  What is important to keep in mind is the time period. This is a time when scientific reason had no place and the settlers of the time were ruled by their faith.  The land that surrounded the villages was mostly untouched, and in the darkness, evil was believed to lurk.  Robert Eggers beautifully captures the time period here, everything from the sets, the costumes, to even the Old English dialect used by the characters is authentic and helps immerse us into this time. One of my few nitpicks with the film is that the language is so authentic I had trouble with some of the dialog, as did others around me. Perhaps subtitles could have been used, but I’m afraid it would have taken me out of this world created for us.

From the get-go the film immerses us in mystery as we are introduced to a family that is in the process of being banished from their village.  The reasons for them being forced to leave the village is never really explained, but that is fine; it’s simply a device that helps the viewer form their own opinion on the events that slowly unfold in the film.  And I do mean slowly, though creepy things occur early on in the film, The Witch does have a very slowly and deliberate pace that may turn off some viewers, or may simply help build on the anticipation of what will occur next.

When the family reaches the edge of the woods and decides to build their new home, the film carefully takes its hold on the audience.  For those who have seen the trailer and you’ve seen the moment where the baby seems to disappear in the middle of a game of peek-a-boo, well, how that sequence plays out is only the start of the uncomfortable horror that continues to play out.  The family wishes to write it off as simply wolves running off with the baby, but we know it is something far more sinister.

It’s with the loss of the baby that the family dynamic set up here begins to splinter and fall apart.  The father, William (Ralph Ineson) has his attention on building their homes and tending their crops; he leads his family through his belief in the Bible.  As the crops die and bad luck continues to plague the family, he sees this as a test from his lord, while the answer to their suffering may be in the woods.  Thomasin (Anya Taylor-Joy) is the daughter who is blossoming into womanhood (to the point her younger brother is stealing glances of her developing bosom), and it is her that seems to believe there is something wicked in the woods, and it is coming for her family.

To say anything more about the plot as it progresses into darkness would be unfair to those who have yet to see this.  It’s a film experience that thrives on making the viewer feel uncomfortable, and it comes as no surprise that the Church of Satan group endorses this film; it reminds me of the old-school gimmicks films would have to bring in audiences.  For some who exit the theater, the film may cause a spark of renewed faith, while others will come away with theories of their own about the film.  I can’t think of a greater compliment to this film than to say how long its story and imagery has stuck with me, and it’s a film I look forward to discussing with others and experiencing it again.

The Witch reminds me about what makes cinema great.  An audience can sit together and watch the same film and come out with drastically different opinions on what they’ve witnessed.  This is what the film-going experience is about.  To sit in a dark auditorium and be taken to another time and to be reminded what it was like to be scared of the unknown.  I can’t wait to see this again and to look for details I missed the first time, and I’m positive this is a title that will go into my Halloween film tradition, right alongside The Exorcist and The Beyond.  This is not your modern witch tale, with kids dressed in black and heavy eye shadow; this is a reminder of what evil can be, and that when it’s coming for you nothing can stop it.

The Witch is presented in the aspect ratio 1.66:1.  The 1080p image is arrived at with an AVC MPEG-4 codec at an average of 32 mbps.  This is a transfer that honestly is as good if not more so than seeing it in the theater. A lot of the color has been stripped away, giving it a very cold and primitive look.  But what makes this image hold up is how firelight plays with the darkness; the blacks are almost overwhelming as the light generated in some of the enclosed scenes appears to be all lit by candles.  This helps make the dark all the more foreboding.  Plenty of detail is captured in the clothing and the sets.  So much attention has been placed on the details, and thankfully the camera was able to capture all of it.

The DTS-HD Master Audio 5.1 track is one that goes hand in hand with the visuals to help take us back in time.  The simple use of ambient noise as well as the drones for the score just adds to the creepiness of the film.  Despite having clear audio and the volume up, the accents and old English dialect make some of the conversations a little hard to follow at times, but for the most part you can understand what the scene is trying to convey.

Audio Commentary with Robert Eggers: Considering the amount of time and effort the man put in to make the film as accurate as it is, of course he has plenty of interesting tidbits about what went into getting the movie done and about the story itself.  A must-listen, for any of the fans who are out there.

The Witch: A Primal Folktale: (8:28) This is something I wish was so much longer. We only get snippets of interviews with the cast and behind-the-scenes footage, whereas I would love to see a full documentary about the process of how this film was made.  It is a tease, but still worth watching.

Salem Panel Q&A w/ David Eggers and other guests: (27:59) Here we have a simple panel following a screening that took place in Salem.  A lot of questions are answered about the process of the film and the meanings found in it.

Following my second viewing of the film, I feel I better a better grip on what I feel was going on, and I’m sure in further screenings I’ll continue to find more bits I missed before.  But I still come away loving this film and its ability to suck you into a time where superstition and fact were thought to be the same thing.  At its core it’s a story about a family crumbling in the face of fear, but I still believe every person who sees this can walk away with their own impression of the events.  I love this film, and hopefully this will find its audience and get the financial rewards it deserves, not just the critical accolades.

Brent Lorentson is a horror writer and film critic based out of Tampa, Florida. With a BA in Digital Film, he co-wrote and co-directed Scavenger Hunt. His short stories have appeared in various horror anthologies. In 2019 his short script Fertile Blood will be a part of the anthology horror film Slumber Party. He is currently working on his first novel A Dark and Secret Place set to be released in late 2019. Favorite Films: Taxi Driver, Fight Club, I Saw the Devil, The Wild Bunch, Dawn of the Dead, A Clockwork Orange, Pulp Fiction, Heathers, The Monster Squad, and High Fidelity.
Manson’s Lost Girls Deadpool (UHD Blu-ray) (4K)