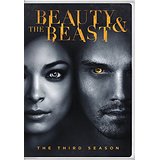 Out of the shadows and into the light. That’s where we find Catherine and Vincent at the beginning of Season 3 of Beauty and the Beast. After successfully bringing down Muirfield, Vincent is no longer relegated to the shadows and can now reenter the world as a free man, allowing Catherine and himself to be together. However, just because he no longer has to hide doesn’t mean that the danger for the lovers is over, as a dangerous new foes resurfaces, hell-bent to keep the two apart. Admittedly, when the series first was announced, I was intrigued and endeavored to get it a change. Not out of nostalgia for the original series for which this based, but for Mrs. Kristin Kreuk. Come now, I couldn’t have been the only one who was drawn to the show because of the woman who put a face to Lana Lang for several years for another (now retired) CW series. Mildly interesting storylines kept me watching the first season; I was a late bloomer for the second season, and now I get to share with you my opinion of the third, and perhaps I’ll take a crack at the upcoming and final season.

At the conclusion of Season 2, Vincent and Catherine have defeated Gabe for the second time (this time for good, hopefully), thus putting an end to the Muirfield experiments. Or so they think, as they come to learn that the world is bigger than they initially thought, being introduced to a pair of Department of Homeland Security agents (Alan Van Sprang and Natasha Henstridge), who task them with helping the DHS hunt and contain individuals who have been subjected to superhuman experiments.

On top of that mission, the couple have a few relationship issues to overcome as well as they attempt to tackle living together and eventually the altar. Can Vincent overcome the territorial side of his DNA in order to be able to happily occupy the same space as his lady love? Also complicating their lives is the reappearance of an immortal foe hinted at last season to cause the downfall of Alistair and Rebecca.

I will say this for the series: it caught me off guard. Not because of the storylines, although those did prove to hold my interest. What caught me off guard was how quickly it received confirmation that it would be renewed for a fourth season. Early renewal status is not uncommon for TV shows, correct? Heck, most of the time networks know whether not they will bring a show back within the first couple of episodes. However, let me ask you this: how often do you see a show get renewed for another season before the airing of the previous season? For me, this was first time I ever saw such an occurrence. The CW announced that Beauty and the Beast would return for a fourth season, almost a month before the airing of Season 3. Granted season 4 was confirmed to be the final season; it is still an accomplishment, nonetheless, if you ask me.

The excitement didn’t fully kick in for me until the second half of the season with the introduction of Jason Gedrick as the immortal beast with an ageless vendetta, Liam Cullen. Gedrick portrays the villain for the season, which he is no stranger to doing. Normally I view being typecast as a bad thing. On the other hand, when you think about it, in order to be typecast you have to be doing something that makes them believe that this is your niche. Despite it being normal territory for him, Gedrick makes the role his own, displaying cunning and guile as he attempts to push Vincent past the primal line and making him more like him, in order to destroy their love, much like he did to their ancestors.

Although the show was the fine line between police procedural and fantasy, a large contributing factor to its longevity in my opinion is the chemistry between Kreuk and Ryan. They are winning together, and though there are moments where circumstances make them question being together, when push comes to shove, it’s them versus anyone who stands in their way. To be honest, I never expected it to make it out of its first season; now here we sit on the brink of Season 4, thanks to the two’s chemistry and moderately compelling storytelling, and a light infusion of comedy courtesy of J.T.

Season 4 is scheduled to premiere June 2, and I fully expect the series to go out on a high note. I recommend that you binge-watch Season 3 if you aren’t already caught up, so you can enjoy it as well.

Jeremy Butler is a film school graduate of the International Academy of Design and Technology. He is been writing for Upcomingdiscs since 2012; however, movies have played a big part of his life for much longer. Favorite genres include horror, science fiction/fantasy, and comedy. Favorite movies are V for Vendetta, Boondocks Saints, Kiss Kiss Bang Bang, and The Godfather.
The Lobster Cop Rock: The Complete Series