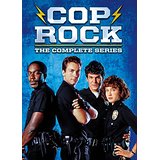 You know a series is not likely to make it when it jumps the shark halfway through the pilot episode. But if your name is Steven Bochco, you get a little more rope than most with which to hang yourself. And why not? Bochco changed the entire landscape of television with shows like Hill Street Blues. He’s provided the training ground that gave us other brilliant television minds like David Kelly and Dick Wolf. He’s managed to push the boundaries of what you can and can’t do on the small screen with such controversial hits as NYPD Blue. With those kinds of street creds, you get a lot more rope than most. Still, every now and then even the greats manage to use that rope to hang themselves. When Bochco proposed a Hill Street-like cop show that’s also a musical, everyone told him it couldn’t be done. This time everyone was right, and Cop Rock has gone down in history as the Plan Nine From Outer Space of television, and while Steven Bochco is no Ed Wood, this is the show that’s so bad you might actually enjoy it anyway.

I remember the original (short) original run of Cop Rock from 1990. I appear to have remembered it more fondly than it actually deserved. When the opportunity to review the show came up, I jumped at it. I had somewhat warm memories of the show, mostly surrounding the very nice Randy Newman theme song and original opening credits. The rest was somewhat of a blur. Obviously, I blocked that out and was prepared for something different than what I got here. The show only made it to seven episodes on ABC in 1990. While 11 were actually produced, there are episodes here that did not make the original run but did end up aired. It was actually a very expensive show to produce and was hemorrhaging money faster than John Carter of Mars by the second episode. Everyone knew they were pretty much done by Episode 4. Credit the cast and crew for holding their heads high as they continued the remaining productions. There’s a nice five-minute coda to the last episode where the cast are bummed about the cancellation and tell us it ain’t over until the fat lady sings… and she does. This is actually really great stuff. Also a cameo by Hunter from Hill Street Blues is a wonderful few seconds.

The show was a cop ensemble that took many of its non-musical beats almost directly from Hill Street Blues. Larry Joshua is Captain John Hollander. He’s a no-nonsense guy who doesn’t know how to navigate the political waters. His superior is Ronny Cox as Chief Kendrick. Kendrick sees himself as the lone lawman in the Old Wild West. He likes cowboy songs and has a mechanical quick-draw machine to vent his frustrations. He’s a bit of a racist and tends to put his foot in his mouth when he’s in front of the microphones or cameras. He answers to Barbara Bosson as Mayor Plank. Bosson is an absolute prime example of nepotism at its best. She was Bochco’s wife at the time until 1997. She’s never been a talented actress, and the show makes fun of her looks by deliberately covering her face in prosthetics. Unfortunately, when she has her face lift and the makeup is removed, it’s not much of an improvement. But we’re supposed to accept her now as some beauty queen. Insert your favorite Fred Sanford/Aunt Esther joke here. Bosson is also responsible for the early shark jumping when she jumps up on a table in the mayor’s office to sing while being offered a bribe. It’s a low point for the series and for the husband-and-wife team.

The cast also includes the obligatory abusive cop in Peter Onorati’s excellent portrayal of Detective Vincent LaRusso. Anne Bobby is the naive young female cop Officer Viki Quinn, married to the much older medical examiner Lt. Quinn. Future NYPD lieutenant James McDaniel stars as a young patrol officer. The show is populated with a squad of other detectives and cops who could also be taken right out of Hill Street Blues. That should not be a surprise. Not only was Hill Street a turning point for Bochco, but Cop Rock began when he was approached about bringing Hill Street to Broadway. NBC balked at the idea, so he simply created a new version for his ABC series.

Most of these few episodes focus on LaRusso killing a cop-killer about to walk when the bust is messed up. Hollander wants to nail him, and other cops feel pressure to come forward or not. Plenty of Thin Blue Line material here. The rest is pretty much solid day-to-day police work. The show excels at these moments. Unfortunately, the songs often intrude and break up the storytelling. They even get rather crazy with staging and choreography. There’s no question that these moments are often abrupt and do not allow for smooth pacing. Often they feel like it’s just the obligatory song break. The pilot includes five Randy Newman songs, but there was no way the budget was going to sustain that kind of song talent after the first hour. Bochco himself admits the musical quality went downhill immediately after they used Randy’s songs. That’s a problem when you’re calling yourself a musical.

This is strictly a historical show with a limited fan base. It’s worth a look, but I see few opportunities for repeat watching. Bochco recovered nicely from the setback. Two years later NYPD Blue took the television landscape hostage for nearly a decade. A full series as a musical just doesn’t work. Buffy and Grey’s Anatomy have proven that musical episodes can be outstanding television. It just can’t sustain week to week.

It’s nice of Shout Factory to make this stuff available. You get all 11 episodes here with interviews from both Bochco and Anne Bobby. Bochco reduces himself to an unreliable narrator when he states he has never done science fiction. In fact he was the creator/writer and producer of both The Invisible Man, a gem of a failure with David McCallum in the title role, and a return to the same theme with The Gemini Man. I actually liked both shows. Not sure why he would lie about his involvement. It calls into question other statements like the doubtful claim that all of the singing was recorded live during filming.

Bochco did indeed stick his neck out on this one. It was a noble effort at creativity. Not everything works, but we should be grateful he was willing to be inventive, or we would never have had Hill Street Blues or NYPD Blue. Unfortunately, in Hollywood if you stick your neck out too far, “There’s not a sign of comfort anywhere.”

Gino Sassani is a member of the Southeastern Film Critic's Association (SEFCA). He is a film and television critic based in Tampa, Florida. He's also the Senior Editor here at Upcomingdiscs. Gino started reviewing films in the early 1990's as a segment of his local television show Focus. He's an award-winning recording artist for Omega Records. Gino is currently working on his 8th album Merchants & Mercenaries. Gino took over Upcomingdiscs Dec 1, 2008. He works out of a home theater he calls The Reel World. Favorite films: The Godfather, The Godfather Part II, The Body Snatcher (Val Lewton film with Karloff and Lugosi, not the pod people film), Unforgiven, Gladiator, The Lion King, Jaws, Son Of Frankenstein, The Good, The Bad And The Ugly, and Monsters, Inc.
Beauty & the Beast: Season 3 Zoolander No. 2: The Magnum Edition (Blu-ray)