Posted in: Disc Reviews by Gino Sassani on June 6th, 2016 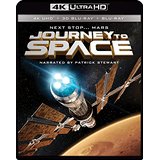 “We began as wanderers, and are wanderers still. We have lingered enough on the shores of the Cosmic Ocean. We are ready at last to set sail for the stars” – Carl Sagan

The Shout Factory documentary Journey To Space is the kind of release that the 4K market was made to serve. Most of this material was filmed in 65mm or with digital cameras in as high as 10K resolution. It was made for screens that are up to three stories tall and still show off the wonders of the images presented. That makes it the perfect kind of item to put on a 4K disc. It was created to be seen with this kind of resolution and color clarity. The material isn’t completely original. There is footage here from several other films: The Dream Is Alive, Destiny In Space, Mission To Mir, Space Station 3D, and Hubble 3D. All are created for IMAX theaters. Call it a space odyssey of greatest hits.

Most of the documentary is narrated by Patrick Stewart. He’s a fine choice on so many different levels. As Captain Picard in Star Trek: The Next Generation, he represents the idea of space exploration for so many fans. He also has one of those regal voices that can bring such power to a narration. Some of the narration is covered by astronauts and other NASA employees who deliver a firsthand experience to the images we see.

It begins very much as a tribute to the 30 years of the space shuttle. We get to see a few launches and beauty shots of the craft in orbit. There’s footage of the crew at work and at play. The tragic events of the two accidents are covered, and this segment ends with footage of a shuttle navigating the streets and neighborhoods of L.A. on its way to the California Science Center where it is now on display. Hubble images, made possible by the shuttle’s use offer a nice segue to the International Space Station, a feat also impossible without the shuttle. Again there is footage of the crew and a model that demonstrates the construction phases.

The rest of the film focuses on the future of space exploration. The Orion capsule is covered as well as various projects from suit design to equipment concepts that might lead us to Mars as early as the 2030’s.

Of course the images are spectacular. It’s a short film at just over 45 minutes, but there is some nice use of the high resolution. It’s a nice inexpensive way to enter the UHD market and a good first title toward your future 4K library.

Journey to Space is presented in an aspect ratio of 1.78:1. The Ultra high-definition  image is arrived at by an HEVC codec. I also viewed the 3D Blu-ray that is included in the set. The 3D effects are nice, but you’re better off with the 4K version. Seeing both back to back really drove home just how brilliant the colors are in 4K. The reds of the Martian surface and the shuttle exterior fuel tank are instantly obvious examples of the difference in the color from HD to UHD. Contrast is also much more dynamic when you see the Earth against the deep inky blackness of space. A early scene of a coastal flight shows more dramatic difference in the color and sharpness of the UHD image presentation. Check them out side by side and you will be blown away. Those who claim the differences are negligible and not very stark don’t know what in the heck they’re talking about. Here’s the proof.

The Blu-ray sports a Dolby Digital 7.1 track while the UHD audio sports an Atmos track that defaults to 7.1. Both are solid with more sub response evident on the UHD audio presentation. The launch of the shuttles offers some powerful room-shaking work. This is also where the surrounds really come alive. Much of the rest is narration and really not going to excite your ears very much. But there are those few moments where you get taken away.

Behind The Scenes: (5:03) Found on both discs, this brief feature deals mostly with the 3D conversion and the high resolution of the source material.

Space is the final frontier, and 4K is the latest frontier in home entertainment. They come together here for an exciting documentary that allows you to dip your toes into the 4K market while taking you out into space. Back in the 1980’s we were getting our first taste of home entertainment with videotape. Since then I’ve had video discs, laser discs, DVD’s, Blu-rays, and now UHD. “Who knew that 30 years would go by so quickly?”

Gino Sassani is a member of the Southeastern Film Critic's Association (SEFCA). He is a film and television critic based in Tampa, Florida. He's also the Senior Editor here at Upcomingdiscs. Gino started reviewing films in the early 1990's as a segment of his local television show Focus. He's an award-winning recording artist for Omega Records. Gino is currently working on his 8th album Merchants & Mercenaries. Gino took over Upcomingdiscs Dec 1, 2008. He works out of a home theater he calls The Reel World. Favorite films: The Godfather, The Godfather Part II, The Body Snatcher (Val Lewton film with Karloff and Lugosi, not the pod people film), Unforgiven, Gladiator, The Lion King, Jaws, Son Of Frankenstein, The Good, The Bad And The Ugly, and Monsters, Inc.
Kroll Show: Season 3 Tuesday Round Up: June 7, 2016