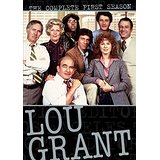 Ed Asner’s character Lou Grant started life on the Mary Tyler Moore Show. The sit-com lasted seven seasons, taking a large stash of Emmy awards during its run. It also competed with All In The Family as a heavy-hitter in spinoffs. Rhoda and Phyllis each had a respectable run also in the sit-com world. But the most amazing spinoff and the most successful wasn’t another sit-com at all. It was an hour-long drama that took us inside the workings of a major L.A. newspaper, The Los Angeles Tribune. There Lou Grant, fired from his television station gig in Minneapolis, lands on the doorstep of his good friend Charlie Hume (Adams), who happens to be the paper’s managing editor. The job’s his, and the drama ran for five seasons.

Today it might be a little difficult to imagine how a show like this could work. Newspapers are struggling and delivering their news in ways that did not even exist in 1977. But there was no consumer internet and no cable news stations. Newspapers were actually the main source of daily news to most Americans. There were no bloggers, and everyone wasn’t carrying around a telephone in their pockets to instantly report and video-record what was happening in the world. The nation was still recovering from the Nixon Watergate scandal that had been revealed by two newspaper reporters at The Washington Post. For a little while, newspaper reporters were kind of heroes of the age. Lou Grant manage to take advantage of all of this with the help of wonderful characters and some solid stories often ripped from the real headlines of the day.

While Ed Asner’s reprisal of Lou Grant might have been the focus of the show, it was much more of an ensemble than the name implies. Lou himself wasn’t quite the comical, gruff taskmaster that he was on Mary Tyler Moore. The series managed to keep the hard edge but soften it enough to remove most of the comedic elements. That’s not to say the show didn’t do a good share of comedy. There were certainly light moments to be found, but much less the situations themselves. Most of that material was soberingly serious. The comedy came from the character relationships and interactions. There was just enough camaraderie in that competitive workplace to make it attractive and fun to watch.

First there was Charlie Hume, played by Mason Adams. Adams was also the long-time voice for Smuckers jellies and jams. “With a name like Smuckers, it’s got to be good.” Charlie was a family man who was really married to the Tribune. He was the captain of the ship and often the source of some friendly, and not so friendly, friction with his pal and City Editor Lou Grant. The paper’s publisher was the rich widow Margaret Pynchon, played by Tony Soprano’s nasty momma Nancy Marchand. She ruled from the building’s tower office and was often the sounding board between Lou and Charlie. Then she would hand down the final edict. While she played tough, it was obvious that she had a very soft spot in her heart for both men and the rest of the workers on the paper. The Woodward/Bernstein clone was Joe Rossi, played by Robert Walden. Rossi was a bulldog when he was on a story and often appeared heartless except to the people who really knew him best. He was also a royal pain to everyone around him. He was good, and he knew it, and was the first to remind everyone else. Dennis “Animal” Price was the hippie-looking staff photographer. He took people off guard with his sloppy dress and manners, but you always knew there was something else in there. Finally, the Assistant City Editor was Art Donovan, played by Jack Bannon.

The show needed a female perspective, and for the first few episodes that was provided by Rebecca Balding as reporter Carla Mardigian. The actress and character never quite worked in the ensemble. She appeared too emotional and weak and couldn’t hold her own against all these tough guys. Within a few weeks she was gone with no explanation, and Lou brought over Billie Newman, played by Linda Kelsey. She started in the “women’s” section and was brought over to the metropolitan side. She ended up becoming much more of a force within the group. She still retained the sometimes emotional feminine requisite, but she could go toe-to- toe with any of the guys. She was more assertive, to be sure. Eventually Billie and Rossi developed a great chemistry that served the show well for the remainder of its run.

There are some memorable guest appearances in the first season WKRP’s Gordon Jump was a recurring editor in the first few seasons. One episode even featured that show’s Tim Reid and Richard Sanders as a senator. A very young Peter Weller and Brian Dennehy star together as Nazis in an episode appropriately entitled Nazi. That episode would also be the real breakout one for the Billie Newman character. In Judge, Lou takes on a crazy senile judge, played by Bernard Hughes. Gail Strickland stars as a reporter who is compromised while covering a politician, one she’s also sleeping with. In Spies, the staff worry that someone at the paper might be working for the CIA. Friend suspects friend, and paranoia runs rampant. Poison features a couple of interesting elements. Rossi has a friend who has insider information on an unsafe nuclear power plant. The name of the plant obviously caused a stir. Great expense and effort is made to ADR a new name for the business. Legal must have run into trouble with the episode’s intended corporation. The original name was obviously Nukon (credit to staff member Paul for catching it) but was changed to Tucore. You can play a little drinking game to see if you can spot a line that will include the company name by how the sound drastically changes. It’s easy, so plan on getting plastered. The season ends with an episode obviously written in case the show did not get renewed. Lou finds out he has thyroid cancer and worries about the pending surgery. The episode ends with the whole gang hanging around the hospital room for support. It would have been a satisfying conclusion had the series ended. It didn’t. It went on to five years and 20 Emmy awards.

When the series did end, it wasn’t because of the ratings. While Lou Grant was never a ratings powerhouse, it finished respectably each year. It was also quite critically acclaimed with a loyal fan base. It was Ed Asner’s political activities that finally brought the show down. He was quite angry with Reagan’s Central America policy and made the mistake of stating he was fine if Nicaragua went communist if that’s what the people wanted. It made him toxic even as the Cold War might have been winding down. The show couldn’t continue without its titular character, so the writing was on the wall.

The show was an inspiration for future journalists. Between Lou Grant and Carl Kolchak, I had many years of dreaming I might be a newspaper reporter. This is as close as I got. Shout does a good job of bringing the first season to its long-overdue DVD release. I am very eager for the next three seasons. I know I’ll be watching them and reporting back to you. “It’s what we do here.”

Gino Sassani is a member of the Southeastern Film Critic's Association (SEFCA). He is a film and television critic based in Tampa, Florida. He's also the Senior Editor here at Upcomingdiscs. Gino started reviewing films in the early 1990's as a segment of his local television show Focus. He's an award-winning recording artist for Omega Records. Gino is currently working on his 8th album Merchants & Mercenaries. Gino took over Upcomingdiscs Dec 1, 2008. He works out of a home theater he calls The Reel World. Favorite films: The Godfather, The Godfather Part II, The Body Snatcher (Val Lewton film with Karloff and Lugosi, not the pod people film), Unforgiven, Gladiator, The Lion King, Jaws, Son Of Frankenstein, The Good, The Bad And The Ugly, and Monsters, Inc.
The Martian: Extended Edition (Blu-ray) Tuesday Round Up: June 14, 2016