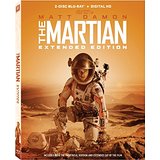 In 1979, Ridley Scott taught us that in space no one can hear you scream. More than 35 years after Alien established him as a top directorial talent, Scott has slightly amended that statement to read “in space no one can hear you…blast disco music and binge watch Happy Days.” These lighthearted coping mechanisms — used here to deal with a truly horrifying and hopeless situation — are strong indicators of what you’re in for with The Martian, which is both brainier and much funnier than your average space epic. Now the sci-fi blockbuster returns to home video with an Extended Edition.

I hate to start this synopsis with a lie, but Watney (Matt Damon) — the presumed dead astronaut who is stranded on Mars after his Ares 3 mission is abruptly cut short by a dust storm — is very much alive. After performing a painful bit of self-surgery, which made me flash back to a certain sequence in Scott’s own Prometheus — Watney regroups and does some practical math. The next manned mission to Mars isn’t due to arrive for another four years, but Watney is holed up in an environment designed to sustain life for about 31 days. Even after cataloguing his departed crew members’ supplies and making plans to stretch them out, Watney still doesn’t have nearly enough materials to keep him alive until help arrives. So what’s a brilliant, resourceful guy to do?

“I’m gonna have to science the s— out of this.”

The fact that Watney uses the word “science” as a verb is no accident. In The Martian — which is based on Andy Weir’s popular 2011 novel — ingenuity and inventiveness are the hero’s prevailing actions. (As opposed to punching or shooting his way out of the problem.) Turns out Watney is a smarty pants botanist who devices a way a generate water and grow potatoes. But he’s not the only one hustling to make a scientific miracle happen.

To be honest, The Martian is a surprisingly easy sell. It’s “Cast Away on Mars.” The story also allows us to temporarily live in an alternate reality where humans have already set foot on Mars and throngs of people gather in the streets to watch the latest NASA mission. (At best, the most we could hope for in real life is someone taking the time to stream the latest launch on their phone.) Heck, Interstellar fans can even have some fun by pretending that The Martian is simply the same story told from the perspective of Damon’s similarly stranded character.

But whereas Interstellar was equal parts dazzling and ponderous, The Martian is unabashedly…fun. And I’m not just talking about playful song selections (Thelma Houston’s “Don’t Leave Me This Way”, David Bowie’s “Starman”) that nod to Watney’s predicament. Scott displays a deft, surprisingly brisk touch with the material. He bypasses voiceover narration and has Watney do video logs that outline the scientific thinking behind his more innovative decisions. But when the action on Earth threatens to sag in the film’s latter third — as NASA formulates its last, best plan to save Watney — Scott “yada-yadas” some of the science by having characters dismissively blurt, “it checks out.”

There’s also the fact that, instead of a protagonist who falls into a pit of psychological despair, Watney pretty much puts the “smart” in “smart-ass.” That attitude could easily come off as glibness in the hands of a less capable actor than Damon, who radiates intelligence even when he plays a janitor. But Damon has enough gravitas to convey the seriousness of the situation while retaining the charm that made him a movie star. (And it’s no major spoiler to say that things do eventually go very wrong for Watney on Mars.) Even though Damon is definitely capable of holding the screen for long stretches of time, The Martian — which has been adapted for the screen by Drew Goddard — smartly cuts back to Earth every once in a while to keep things from getting stale.

Plus, it would be a shame to waste such an outstanding cast by focusing on just one guy. To be fair, a few outstanding performers — especially powerhouses like Chastain (as the commander of the Ares 3 crew) and Ejiofor — are grossly overqualified for what they’re required to do here, but it’s also enjoyable seeing them take on lighter,  less-demanding roles. The other standouts are Daniels (porting over his amusingly glib/blowhard rhythms from The Newsroom) and Pena (continuing his comedic, motormouth winning streak in big budget tentpoles). The Martian also mixes in performers like Kristen Wiig (slightly toning down her manic comic persona to play a NASA flack), Donald Glover (not at all toning down his comic persona to play a quirky astrodynamicist), and Sean Bean (who is mostly here so Lord of the Rings fans can have a nerdgasm when something called “Project Elrond” comes up).

The final act stretches the credulity the rest of the film worked hard to construct. And despite having a master craftsman like Scott at the helm, the film doesn’t really come close to packing the visual (or even emotional) punch of that other recent “marooned in space” drama. Yet despite the lack of oxygen in Watney’s new surroundings, The Martian is a smart, crowd-pleasing breath of fresh air in a genre that often takes itself much too seriously.

The Martian: Extended Edition is presented in an aspect ratio of 2.40:1. The 1080p image is arrived at with an AVC MPEG-4 codec at an average of 28 mbps. Obviously, the first part of this visual presentation that stands out is the otherworldly Martian landscape. The fine detail and texture here make the movie’s primary setting feel surprisingly organic. The same level of care is on display whenever Watney retreats into his claustrophobic surroundings. (The fact that we can so vividly see the cold sweat on Watney’s face and the very first fruits of his farming labor help bring his predicament to life.) Back on Earth, the tone is a little chillier, but the presentation doesn’t suffer too much. Between the NASA higher-ups and the quirkier scientists, there’s enough visual variety to keep those sequences from looking stagnant. Meanwhile, some intermittent shots of space show off the disc’s inky black levels. In short, this is another top-notch offering from Fox.

The DTS-HD Master Audio 7.1 track is even more astounding than the impressive visual presentation. The early storm that strands Watney is an all-compassing horror highlighted by room-shaking subs and flecks of dust bouncing off every speaker in the sound field. But even after things inevitably quiet down, the track does subtle things to convey the main character’s isolation. They include a consistent, low whoosh in the rears accompanied by the constant whir of machinery. The surround activity is actually livelier back on Earth as NASA personnel scramble in their efforts to save Watney. Things explode again during a key Watney mishap and the movie’s climactic rescue attempt. Everything in between — the dialogue, the disco songs Watney hates — comes through impeccably on this reference quality track.

All of the bonus material is presented in HD. The Extended Edition includes the special features from January’s Blu-ray release along with some impressive additions.

(Exclusive to the Extended Edition)

Audio Commentary with director Ridley Scott, writer Drew Goddard, and author Andy Weir: Scott recorded his portion solo, while Goddard and Weir engage in a lively conversation. Scott offers some fantastic production details (it’s his third time filming in Jordan, following Prometheus and Exodus) and particularly enjoys pointing out the story’s more lighthearted beats. (He even makes fun of an apparently useless/random shot of Watney fiddling around with his helmet.)

Meanwhile, Goddard and Weir focus on the differences and similarities between the book and the script. (Crafting the balance between the Mars and Earth scenes early on is especially interesting; Goddard really wanted to sell Watney’s isolation.) Despite inevitably feeling a bit stilted at times, this is a terrific commentary.

Deleted Scenes: (4:06) There are three scenes, and the best of the bunch gives us a sense of the strain on Watney’s fellow crew members aboard the Hermes. We also get one more bit of awe-struck voiceover from Watney toward the end, and extra footage of Watney calculating travel distances on Mars.

The Long Way Home — Making The Martian: (1:19:21) This in-depth, six-part documentary — Signal Acquired: Writing and Direction, The Bleeding Edge: Science and Design, Occupy Mars: Casting and Costumes, Three Worlds Away: Production — Hungary and Jordan, Wrath of the Red Planet: Stunts and Action, and Bring Him Home: Post Production — does a terrific job of covering every aspect of the film’s production.

(Special Features ported over from the previous Blu-ray release)

Signal Acquired — Writing and Direction, Occupy Mars — Casting and Costumes: Both of these featurettes have been folded into the aforementioned “Long Way Home” documentary.

Gag Reel: (7:33) The Martian has plenty of humor weaved into the story, so this goofy, well-composed gag reel is plenty enjoyable and not much of a stretch.

Ares Mission Videos, Ares III — Refocused: (30:32) There are five slick, in-character mission videos: Ares: Our Greatest Adventure is a faux preview of the Ares mission with the now-obligatory Neil deGrasse Tyson appearance; The Right Stuff features interviews with the crew shortly after 10 days of isolation; Leave Your Mark is a Watney training montage that looks like a Nike commercial; Ares III: Farewell has Watney fumbling and joking around with a camera six hours before launch; Bring Him Home looks at the worldwide response to Watney’s predicament.

The most intriguing of the bunch is Ares III: Refocused, which takes a retrospective look at the Earth-bound (and political) efforts to rescue Watney. (This featurette gives Sean Bean, Jeff Daniels, and Chiwetel Ejiofor a little more to do.)

The 151-minute Extended Edition adds a little less than 10 minutes to the theatrical cut. The new material includes more of Watney puttering around on Mars (including resolving to finish the work of his fellow Ares III crew members) and recovering from his self-surgery. The most notable bits include revealing what Watney typed after NASA implored him to watch his language and an out-of-leftfield glimpse into the personal life of Wiig’s Annie.

In terms of Scott’s filmography, this certainly isn’t a Kingdom of Heaven-style overhaul. On top of that, this Extended Edition arrives less than six months after the movie’s initial release, which is a little soon for a double dip.

So while I wouldn’t recommend you grab this Extended Edition based solely on the new footage, the added special features (particularly the commentary and the NASA-centric stuff) puts it over the top of me. Combine that with some first-rate A/V components and this release — like the movie it supports — is a winner.