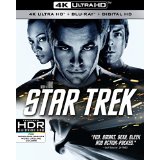 A certain beloved sci-fi franchise is about to boldly go where no Star Trek title has gone before: the world of 4K Ultra HD! 2009’s Star Trek and 2013’s Star Trek Into Darkness make their 4K debuts this week, courtesy of Paramount. The studio also unleashes Star Trek II: The Wrath of Khan Director’s Cut. In non-Starfleet news, Paramount bunkers down and visits 10 Cloverfield Lane, while Lionsgate takes a bite out of Shark Week: Jawsome Encounters.

Shout! Factory lays its peepers on Jeepers Creepers and Jeepers Creepers 2. (You can already check out our take on Maude: Season 5, which Shout! was also kind enough to send along.) Vivendi does battle with Bodyguards & Assassins, Entertainment One psyches us out with Altered Minds, and Magnolia Home Entertainment gets Gridlocked during a routine ride along. Finally, HBO follows the wild, off-field lives of a group of Ballers: Season 1.

One last reminder before signing off for the week: if you’re shopping for anything on Amazon  — it’s not too late to order a Father’s Day gift — and you do it through one of our links, it’ll help keep the lights on here at UpcomingDiscs. See ya next week!