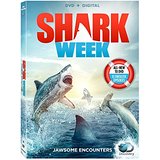 Pop quiz! Which of the following titles belong to Shark Week specials, and which of them are the names of SyFy original movies? Zombie Sharks, Sharkageddon, Monster Hammerhead, Lair of the Mega Shark, and Sharksanity. (I’ll give you a few seconds to mull it over…ok, ready to guess?) The answer, of course, is that *all* of those titles belong to Shark Week, Discovery Channel’s long-running, wildly popular, and increasingly ludicrous summertime ritual.

The very first Shark Week aired in 1988, and its longevity is a testament to viewers’ enduring fascination with the majestic, sharp-toothed creatures. Of course, the flip side of that longevity is that coming up with new material each year is getting more and more difficult. Jawsome Encounters is a 13-episode DVD set that (mostly) features episode from 2014.

Let’s get the nonsense out of the way first. After airing the controversial “Megalodon: The Monster Shark Lives” mockumentary special in 2013, Discovery decided to double down on the phony shark material. (Can’t totally say I blame them: even though “Megalodon” attracted a tidal wave of controversy, it also led to phenomenal ratings.) Jawsome Encounters features TWO specials dedicated to the search for fake sharks: “Shark of Darkness: Wrath of Submarine” is centered on an urban legend and purports to show footage from a deadly attack on a boat. Meanwhile, “Monster Hammerhead” chronicles the search for a similarly vicious (and flimsy) Florida-based shark.

On the one hand, anyone who’s seen The Blair Witch Project or a Paranormal Activity movie knows not to take far-fetched, found-footage folklore at face value. Then again, people who tune into a science-themed program on the Discovery Channel have a much greater expectation for verisimilitude than anybody who plunks down to watch a horror movie. The part that pushes it over the line for me is Discovery’s apparent attempts to fool both the viewers *and* the people who actually participated in the documentaries. While “Shark of Darkness” is more overtly phony, it seems “Monster Hammerhead” actually misled real scientists into participating so they could lend the special an air of authenticity.

You won’t be surprised to learn that Discovery also took the (shark) bait and returned to the Megalodon well in a more direct way. Jawsome Encounters features “Megalodon: The New Evidence” a fake news special featuring the return of phony marine biologist Collin Drake, who claims to have, well, new evidence of Megalodon’s existence. That’s not the only redux on this DVD set: we also get “Spawn of Jaws: The Birth” an actually worthwhile special tracking the birthplace of Great Whites that features the late Paul Walker. (“Spawn of Jaws” was also featured in last year’s Dominating the Deep DVD set.)

There’s yet another sequel of sorts here: “I Escaped Jaws II” features legitimately shocking footage from gruesome real-life shark attacks along with testimonials from the people who lived to tell the tale. And “Sharksanity” is a jokey special hosted by “Bob the Shark” (comedian Bob Oschack) that recaps some of best new material from 2014’s Shark Week. We also get to see some fan-favorite clips from past Shark Weeks, including a photographer floating atop a whale carcass so he can take pictures of a shark feasting (2001’s “Air Jaws: Sharks of South Africa”) and a clip from 2005 of Dirty Jobs host Mike Rowe submerging himself in a shark cage.

The rest of the episodes on Jawsome Encounters at least seem to have some real-life science attached to them, even if specials like “Sharkageddon” (about the supposed rise in shark attacks in Hawaii) can’t help but goose some numbers to create drama. That’s the frustrating thing about the most recent iterations of Shark Week. To me, sharks are fascinating enough in their own right. So witnessing the parade of slow-motion shots and urgent, deep-voiced narrators trying to artificially pump up the drama makes my eyes roll.

In that sense, the ludicrous titles of these specials are actually the most harmless thing about them. For example, “Great White Matrix” doesn’t feature sharks fighting in bullet time, but we do get some interesting insight into how some Great Whites in Australia may hunt in groups. Similarly, “Lair of the Mega Shark” isn’t some lost Roger Corman production; it’s a search for Great Whites in New Zealand.

Not surprisingly, my favorite specials were the ones that simply pointed the cameras at these powerful creatures and got out of the way. Jawsome Encounters gets off to a great start with “Air Jaws: Fin of Fury”, which chronicles the two-year search for a massive shark named Colossus who was photographed breaching the surface of the waters near Seal Island, South Africa in 2011. (The jumping footage here is the best use of slo-mo on this DVD set.) “Zombie Sharks” sounds like a lame attempt to cash in on the popularity of The Walking Dead, but it examines how tonic immobility (a natural state of paralysis for some animals) might be leaving certain sharks vulnerable to predators. (The footage of sharks being turned upside down by hand to test this theory is the second best use of slo-mo on this DVD set.) “Jaws Strikes Back” sounds like an ill-advised reboot of Steven Spielberg’s classic, but it features some incredible POV footage of sharks hunting in the deep. Finally, “Alien Shark: Return to the Abyss” highlights some truly otherworldly shark species that can be found more than a mile below the ocean’s surface, and it’s probably my favorite episode in this set.

Shark Week: Jawsome Encounters features 13 episodes on three discs, and there is no bonus material. Even though Discovery seems intent on tilting its material toward more phony baloney, there are still a handful of specials here that are worth your time. Enjoy the good stuff while you can.