The Facts Of Life: The Final Season

Posted in: No Huddle by Archive Authors on July 7th, 2016 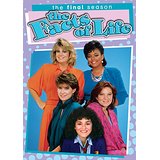 I wrote about The Facts Of Life before (Season 7 in October 2015 and Season 8 in February of 2016). The final season (Season 9) made it one of the longest-running sitcoms up to that time. It was never a number one show, but was consistently popular over the years. There is no George Clooney (Clooney had moved on to Rosanne) in the final season, or Charlotte Rae (who was just tired and left in Season 7). The focus in Season 9 was on the four girls, Blair Warner (Lisa Welchel), Jo Polniaczek (Nancy Mckeon), Natalie Green (Mindy Cohen), and Dorothy ‘Tootie’ Ramsay (Kim Fields), because they were growing up and becoming adults. This led to the whole season being a lead-up to potential spinoffs. They did introduce a new young character, Pippa Mckenna (Sherri Austin), who was a feisty part exchange student/part runaway from Australia. Cloris Leachman returned after joining in Season 8 as the replacement house mother. Mackenzie Austin also returned as the precocious Andy Moffett. But the focus on the girls was about them growing up and moving on. Engagements, marriages, premarital sex, adult jobs, college, and moving to new locations were part of the main storylines of the final season. The Facts of Life was originally a spinoff of the popular Different Strokes. The whole focus of the final season was could The Facts of Life be spun off? One episode had Natalie moving to New York to live with roommates including Richard Greco and David Spade. In another episode, Blair purchases their old school, Eastland, which included student cast members Juliette Lewis, Mayim Bialik, and Seth Green

All the girls were essentially adults and all had serious boyfriends. We finally got to see the mysterious Snake (Robert Romanus from Fast Times at Ridgemont High), the fabled boyfriend of Natalie, which was the focus of the parental warning episode. Jo developed a relationship with a somewhat unstable former pianist, Rick Bonner (Scott Bryce), which bounced in uncomfortable directions. Blair seemed to finally find a match in someone who was her complete opposite, Casey Clark (Paul Provenza), but eventually her somewhat inflexible nature seemed to work against her. ‘Tootie’ seemed to have a secure sense of herself and pursued her dreams of marriage and career in a clear-headed manner.

I cannot say this show is well written, because the general thrusts would be mawkish melodrama and corny comedy, but there were some unusual moments like a social worker who wants to commit suicide because she is tired of the disappointment of helping people and an episode where a man Blair expected to be interested in her was interested in the much older Cloris Leachman. Leachman is probably the most accomplished actress on the show but was never able to create a great chemistry that equaled the departed Charlotte Rae. Ultimately, it tapped into an audience of young girls who recognized themselves in the four fairly different main characters. That audience wasn’t demanding. It just wanted to find something comforting they could turn to every week.