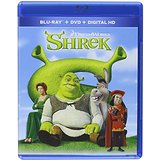 Shrek really did pick the absolute perfect time to emerge from his swamp. The 2001 computer animated sensation from Dreamworks arrived just as rival studio Disney was winding down its decade-long hot streak of hand-drawn new classics like The Little Mermaid, Beauty and the Beast and The Lion King. In other words, it was the ideal moment for someone to come along and take shots at cartoon musicals and fairy tales that end with “Happily Ever After.” (Shrek‘s biggest target, however, was probably the Mouse House itself.) But how does the movie play 15 years later? Fortunately, Fox and Dreamworks have released a new Anniversary Edition to help us figure out the answer.

Full disclosure: I’m not the biggest Shrek fan in the world. Don’t get me wrong: I absolutely understand why the zippy movie was an ogre-sized hit. Yet despite its promising “fractured fairy tale” structure and an outstanding voice cast, I always thought the movie relied too heavily on crude humor and zeitgeist-y punchlines that wouldn’t age well at all. (And I was absolutely right: you’re more than welcome to groan along with me at the Macarena, Riverdance, and Matrix/bullet time references.) I also have a story-related bone to pick with Shrek that I’ll address a bit later, but first a quick synopsis in case you’ve been locked away in the Dragon’s Keep for the last 15 years.

Shrek (voiced by Mike Myers) is an irritable ogre whose solitary life is disrupted after a gaggle of fairy tale creatures descend upon his swamp. They’ve been banished there by evil Lord Farquaad (John Lithgow), who is obsessed with having the fairest kingdom of them all. Unfortunately for him, to have a kingdom you have to be…well, a king. So when Shrek arrives at his doorstep with a chatterbox talking Donkey (Eddie Murphy), Farquaad sends them on a quest to rescue Princess Fiona (Cameron Diaz) so he can marry her and become a king. In exchange, Farquaad promises to rid Shrek’s swamp of the fairy tale creatures. Of course, things don’t exactly go according to plan.

“For your information, there’s a lot more to ogres than people think.”

Shrek — which captured the first ever Oscar for Best Animated Feature — succeeds because it managed to create some truly memorable characters. It also took some funny, satirical jabs at deserving targets. (The most inspired sequence occurs when Shrek and Donkey first arrive at Lord Farquaad’s aggressively shiny and spotless Disney Duloc monolith.) But between all the glib asides and the many (*many*) fart jokes, there’s also a fairly conventional story about an unlikely hero and how everyone you meet has layers.

However, I always felt that the movie significantly undermined its own, “Don’t judge a book by its cover” message with its ending. (Even though the movie is 15 years old and wildly popular, I’ll stay away from specifics.) Suffice it to say, a broken curse results in Shrek realizing that he and Fiona have more in common than he could have ever suspected. Personally, I thought it was a major cop out to have Fiona end up looking the way she does instead of having the princess maintain her original appearance and pairing her with Shrek anyway. (I mean, if the idea is that looks don’t matter, why not?)

Of course, there’s a chance I’m over-thinking this whole thing and that I should probably just kick back and enjoy the ride. And there really is a good deal to enjoy, including some spirited voiceover work. Shrek features the best use of a superstar voice cast that I can think of. (It probably turned out to be a gift and a curse for Dreamworks, which would rely too heavily on star power with movies like Shark Tale.)

Myers makes for an appealingly cranky hero; the actor has blast doing the Scottish accent he clearly relishes. Diaz makes for a refreshingly feisty heroine, and Lithgow wonderfully chews the scenery as the hissable villain. But the breakout star is definitely Murphy’s motormouth Donkey. Murphy was clearly given free reign to riff and improvise, and he absolutely delivers. His work as Donkey in Shrek and its sequels represent the last time Murphy even approached his previous comedic heights on the big screen…and he’s not even technically on screen.

Then again, the voiceover work in Shrek is one of the few things that holds up after all this time. While the movie still makes for an entertaining enough adventure, revisiting this Anniversary Edition after 15 years didn’t quite yield a fairy tale ending.

The Shrek: Anniversary Edition is presented in an aspect ratio of 1.85:1. The 1080p image is arrived at with an AVC MPEG-4 codec at an average of 32 mbps. Shrek was Dreamworks Animation’s second foray into computer-generates feature films (after 1998’s Antz). While there are plenty of dazzling moments here, you can also see how far technology has come in the ensuing 15 years. First off, the colors — especially (duh!) green — practically burst from the screen because they’re so vibrant. Detail is spectacular whether we’re looking at strands of Princess Fiona’s hair or a panoramic shot of a resplendent sunflower field. On top of that, black levels and contrast are spot-on during the spooky(ish) sequence inside the Dragon’s Keep. On the other hand, character movements are not nearly as fluid as we’re accustomed to these days. Also, some blank expressions on the human characters’ faces places them uncomfortably near the Uncanny Valley. (Especially when you contrast those faces with the spirited voiceover work.) But that’s a relatively minor quibble that has more to do with 15-year-old animation than the strength of this Fox Blu-ray presentation.

The Dolby TrueHD 7.1 track is an all-around stunner. The fairy tale score by Harry Gregson-Williams and John Powell is given a properly full-bodied and dynamic presentation. (Unfortunately, that’s also the case for Smash Mouth’s “All-Star” which I embarrassingly know all the words to plays early in the movie.) Shrek’s Swamp, Duloc, and all the other fantastical locations are abuzz with activity that fills the entire surround sound field. Even the subs are heard from quite frequently; instead of providing room-rattling bass (for Shrek’s farts), they help add a bit of punch to some of the comical whacks and pratfalls in the movie. (They also make Gingy’s amusing torture feel a bit more intense.) When you consider all the activity on this track, this is a remarkably well-balanced sonic presentation

All of the bonus material on this disc appears to have been ported over from the Shrek: The Whole Story set released back in 2010. So while there’s some decent stuff here, I absolutely have to take off points for not offering a stitch of new material on this Anniversary Edition.

Filmmakers Commentary: Co-directors Andrew Adamson and Vicky Jenson are joined by producer Aron Warner for this appropriately silly and irreverent track.  While their conversation and good-natured jokes are entertaining, I was most interested in all the scrapped story ideas (like Shrek originally wanting to be a knight) that didn’t make it onto the screen.

The Animators’ Corner: This highly informative (but highly intrusive) special feature allows you to get picture-in-picture commentary from animators and the rest of the filmmaking team as the movie plays. Unfortunately, it’s way too distracting for my taste; you’re better off just clicking on the Filmmakers Commentary, which incorporates some of the information heard here.

Shrek’s Interactive Journey: This interactive map allows you to click on several locations — Shrek’s Swamp, Dragon’s Keep, Duloc, The Windmill, and Sunflower Field — and access concept art for each of them.

Spotlight on Donkey: (11:38) Highlights the motormouth character brought to life by Eddie Murphy. Features comments from Murphy and praise from fellow cast members along with clips from all four Shrek movies. Presented in HD.

Secrets of Shrek: (3:52) This brief featurette focuses on some of the film’s Easter eggs, most notably the 30 or so fairy tale characters who make cameos. Presented in HD.

Deleted Scenes: (8:01) Three storyboarded sequences are enthusiastically acted out by various animators. The most interesting is a new prologue for Fiona, which was taken out because the character’s past would serve as story fodder for Shrek sequels. Presented in standard definition.

Shrek, Rattle and Roll: Musical highlights from the Shrek soundtrack and the rest of Dreamworks Animation. Karaoke Dance Party (2:53) suffers from the same bout of ADD as Shrek itself, as various characters from the movie belt out tiny snippets of songs like “Just the Way You Are”, “Like a Virgin”, “Macho Man”, “Stayin’ Alive”, and others.

Meanwhile, Baha Men’s “Best Year of Our Lives” (3:08) and Smash Mouth’s cover of “I’m a Believer” (3:15) are in a heated competition for “Most Laughably Dated Music Video.” (Baha Men wins this by a nose.) We also get “What’s Up Duloc” from Shrek the Musical (3:57), which I actually liked better than this movie. Finally, there’s the Dreamworks Animation Video Jukebox (10:08), which features a Play All option and includes musical sequences from Shrek, Madagascar, Over the Hedge, Bee Movie, Kung Fu Panda, and How to Train Your Dragon. The Karaoke Dance Party, “Shrek the Musical” song and Dreamworks Animation Video Jukebox are presented in HD, while the music videos are presented in standard definition.

Even if I weren’t lukewarm on the movie itself, I don’t think I could recommend this Anniversary Edition. (Especially since 15 years feels a little arbitrary to put out an “anniversary edition” in the first place.)

As I mentioned before, there’s not a lick of new bonus material to commemorate this so-called “anniversary.” I mean, even the awesome 7.1 audio track is an import from a previous Blu-ray release. Basically, everything about this disc — down to the Megamind (2010) and Kung Fu Panda 2 (2011) trailers that autoplay before the main menu — feels dated.

I can only recommend you pick this up if you don’t already own Shrek on Blu-ray and don’t feel like springing for The Whole Story.

The Facts Of Life: The Final Season Vigilante Diaries (Blu-ray)