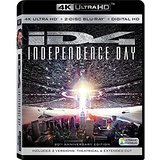 You probably know that Independence Day — the spectacular, shameless sci-fi smash that introduced the world to “Will Smith, Global Superstar” — dropped a sequel last month. What you may not know is that the original film has been granted a 20th Anniversary Blu-ray and UHD release. I was 13 when ID4 came out in the summer of 1996, which means the movie’s deluxe destruction and alien shoot-em-up antics were right in my wheelhouse. So I was curious as to how an older and wiser, um, taller version of me would feel watching it with a critical eye.

I’m assuming you know the plot, so I won’t spend too much time on it. A couple of days before the titular holiday, a massive extraterrestrial mothership settles over Earth and deploys a bunch of “smaller” spacecraft — that are each about 15 miles wide — over major cities and other strategic locations. The U.S. is led by young, charismatic (possibly underprepared) President Thomas Whitmore (Bill Pullman), who tries to manage the situation with help from military and political advisers (Robert Loggia as a gruff general and the late James Rebhorn as a slimy Secretary of Defense) along with his staff, including Margaret Colin’s communications director Constance Spano. Connie’s ex-husband David Levinson (Jeff Goldblum) is a brilliant, overqualified satellite technician who basically becomes the first person on the planet who can prove the aliens didn’t just drop by to say hello.

Of course, David’s warning comes too late, and the aliens unleash a catastrophic attack. Earth’s remaining heroes include brash pilot Steven Hiller (Will Smith) and alcoholic crop duster Russell Casse (Randy Quaid). Those two and a bunch of other survivors eventually join the president and his inner circle to unleash a desperate counterattack on the 4th of July, which doubles as humanity’s last stand.

The other part is that Independence Day boasts an uncommonly charismatic cast, led by Smith’s starmaking performance. Goldblum’s brainy quirkiness also gives the movie the sort of personality these sorts of blockbusters tend to lack. The supporting cast is rounded out by scene-stealers like Judd Hirsch (perfect as David’s kvetching dad) and Brent Spiner (as an inappropriately enthusiastic scientist). The story is thoroughly silly, and the climax — involving an alien computer virus — is laughably absurd. But the likable performers and the movie’s groundbreaking, awe-inspiring visual effects still have the power to convince you to go along for this rollicking ride.

This Extended Edition includes the 145-minute theatrical cut along with a 154-minute extended edition. (You can flip back and forth between both versions using the Set Up function in the main menu.) Fox was also kind enough to label the Extended or Additional Scenes in their scene selection menu. The most notable additions include more screen time and character development for Quaid’s Russell and his disapproving kids. There is also an additional scene where Vivica A. Fox’s Jasmine encounters a street preacher talking about the end of the world while she’s driving through the wreckage of downtown Los Angeles. (The scene’s somber tone and dreamlike quality made it feel out of place with the rest of the movie.)

Independence Day is presented in its original aspect ratio of 2.39:1. The Ultra high-definition  image is arrived at by an HEVC codec. Everything that John told you about the Blu-ray can be said here. The boost you get in 4K comes mostly from the extra details on the surface of the ship and the brilliant reds and oranges found in the fiery explosions. If you can believe it, blacks are even more inky black. The scene where the Roswell craft leaves the atmosphere provides a jarring transition to black that I have not experienced in any previous incarnation of the film. There are some downsides here. The effects were groundbreaking at the time, and still are. In 4K, however, some of the edges do begin to show. The pullback shot of the mother ship looks particularly out of place, as do the flying cars following the explosion. You’ll spot the f/x edges to be sure. The upside is the close-up shots of the ships deliver finer detail of the organic surfaces and alien lines.

The DTS-X finally delivers the 7.1 mix that John was looking for on the Blu-ray. It’s everything he told you about the 5.1 and more. Now you get so much more atmosphere out of the bunker scenes. You can hear just that slight case of echo. The sub also brings you tremendous room-shaking bottoms from the film’s opening frames. I think the Arnold score benefits the most here. The mix allows just the right moments to reach around you and kick up the mood just that much more.

The 2-disc Blu-ray set is also included with all of the extras intact.

When John wrote the review for the Anniversary/Extended Blu-rays, we were not aware Fox would also be sending the UHD Blu-ray. I think we’re both quite glad that they did. While this might appear rather redundant to you, and it certainly is, both of us were overjoyed to have these opportunities to visit the classic film. That privilege would have only fallen to one of us otherwise. So when the 4K arrived a week or so after John’s excellent review, all I could say was “oops“.