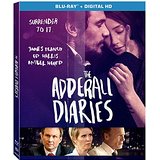 “You have a convenient way of remembering things.”

Buried somewhere deep in The Adderall Diaries — a hybrid family drama and true crime thriller centered around a blocked writer — there’s an interesting exploration of how the past isn’t necessarily set in stone and how two people can recall the same exact event in divergent ways that serve their needs. Unfortunately, the film almost entirely muddles that message beyond recognition, and we’re left with a movie that is neither convenient nor particularly memorable.

“We understand the world by how we retrieve memories…re-order information into stories to justify how we feel.”

Stephen Elliott (James Franco) is a memoirist who has gained some measure of success by writing about his troubled childhood, which included drug addiction following the death of his mother and subsequent abuse by his late father Neil (Ed Harris). Unfortunately for Stephen, he has no idea what to write about next as a deadline — and a persistent editor (Cynthia Nixon) — loom nearby.

He finds a stroke of inspiration in an unexpected place: the trial of Hans Reiser (Christian Slater), a well-to-do entrepreneur accused of murdering his wife after she went missing from the couple’s home. Stephen starts sitting in on the trial and connects with an emotionally damaged New York Times reporter named Lana (Amber Heard). Just as he’s rediscovering his writerly mojo, a professional scandal threatens Stephen’s credibility and his career. As a result, Stephen is forced to revisit and reexamine the traumatic events from his past.

The Adderall Diaries is based on the true crime memoir of the same name authored by Elliott, a memoir writer in real life. (Full disclosure: I hadn’t heard of him nor the Hans Reiser case before I sat down to watch this movie.) The fact that this story is (very loosely) based on actual events adds an unnecessary layer of confusion and ambiguity to a film that is already trying to do way too much.

Writer/director Pamela Romanowsky is on to something interesting after it’s revealed that Stephen may not be such a reliable narrator after all. The harsh, fragmented flashbacks to Stephen’s childhood that occasionally invade his everyday life and assault his senses take on a new meaning. The problem is that none of this — especially the idea that we all make ourselves the tragic heroes of our own stories — truly resonates because Romanowsky has too many other storytelling balls in the air.

The biggest misstep is the inclusion of the Hans Reiser case. The Adderall Diaries can’t seem to decide what aspect of the trial captured Stephen’s imagination; he alternately sympathizes with Reiser’s fall from grace and sees shades of his own abusive father. (The movie almost immediately abandons the opportunistic notion that this could be Stephen’s version of Truman Capote’s “In Cold Blood.”) Either way, this uneven plotline wastes good, understated work from Slater and repeatedly interrupts the film’s narrative flow. Meanwhile, the tortured love story between Stephen and Lana feels like it could’ve been the basis for its own movie, but here it’s merely an occasional distraction. (Although it’s not as distracting as the terrible, unkempt brown wig Heard inexplicably wears for this movie.)

“I know I’m guilty of editing.”

Heck, The Adderall Diairies can’t even keep its most provocative plot thread straight: Romanowsky vacillates between making Stephen’s faulty memory a conscious decision (the stuff with his dad didn’t quite go down the way he’s written about it) and a subconscious impulse (Stephen genuinely can’t recall a key memory he shares with childhood friend Roger, played by Jim Parrack). It doesn’t help that Franco practically sleepwalks through the film. The actor might’ve been trying to convey Stephen’s addled state of mind, but this movie required a strong compelling center to hold our attention throughout the fractured flashbacks and many storylines. The film’s only burst of energy comes courtesy of Harris, who brings soulfulness to his work before it’s even revealed that Neil isn’t quite a total scumbag.

Ultimately, The Adderall Diaries is a “true life” drama with emotional and psychological beats that ring false.

The Adderall Diaries is presented in an aspect ratio of 2.40:1. The 1080p image is arrived at with an AVC MPEG-4 codec at an average of 26 mbps. The intentionally grainy camcorder footage that opens the film offers a helpful contrast for the sharper, modern presentation that comprises most of the movie. There’s a strong stylistic contrast between the gloomier present-day scenes and some of the harsh, overly bright flashback snippets. We also get some aggressive color-grading (particularly some dark blue/purple sequences) that adds a sense of mood to certain scenes, but sometimes feels unnecessary and distracting. Fine detail is generally good here, though it occasionally gets lost in the shuffle as the image works hard to achieve grittiness. The visual presentation for this film is asked to do more heavy lifting than your average low-budget flick, and this Lionsgate disc is (largely) up to the task.

The DTS-HD Master Audio 5.1 track is dialogue-driven, with most of the action being placed toward the front channels. When the music and sound effects do branch out to the rest of the sound field, the results aren’t great. Yes, the track lets out a room-rattling rumble during a sensory overload sequence when Stephen takes drugs, and Michael Andrews’ score consistently feels hefty. Unfortunately, the substandard mix repeatedly had me scrambling for my remote to turn the volume down during intense sequences (mostly Stephen’s flashbacks) and turn it back up when things calmed down (so I could hear what the heck people were saying).

Audio Commentary with director Pamela Romanowsky: The filmmaker is a candid and enthusiastic tour guide through this movie. Beyond the standard praise for the cast, Romanowsky cheerily points out production details (a popular courtroom was also used for HBO’s Show Me a Hero) and book-to-screen tweaks (the love interest/courtroom buddy played by Amber Heard was a combination of several characters). The director even expresses unhappiness over a sequence that was re-cut by the movie’s financiers in an effort to insert more levity. There is also one amusing moment where Romanosky contradicts herself: after complaining about how New York City real estate is rarely presented in a realistic fashion, she freely admits that Stephen’s apartment in this movie would cost about $4 million.

The Adderall Diaries — A Director’s Perspective: (11:49) Romanowsky — who also wrote the movie’s screenplay — talks about her personal connection to the material, especially the part about how two people can have different interpretations of a past event. She also discusses the challenge of exploring intrusive memories in a cinematic way.

Deleted Scenes: (9:47) The four scenes here include a jittery new opening credits sequence and the sort of extended flashback sequence that the movie’s jumpy style denies us in the final cut. We also get a couple more scenes exploring Stephen’s taste for kink.

For what it’s worth, the real Stephen Elliott didn’t much care for this movie either. His issues go beyond an unflattering portrayal by Franco and Romanosky. The problem is that The Adderall Diaries could’ve been a nuanced look at competing, equally-valid truths. Instead, it’s a stylish, messy misfire.