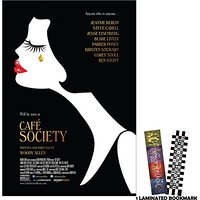 Café Society looks absolutely gorgeous. Every camera setup finds a new authentic location that suggests a time and place long ago. The lighting and cinematography by Vittorio Storaro (Last Tango in Paris, Reds, Apocalypse Now) are sumptuous and delicious. The story is novelistic like an F. Scott Fitzgerald magnum opus. Woody Allen has had a long and very productive career. He is definitely at a stage when he should have slowed down, but he doesn’t. Café Society is not Woody’s magnum opus, but it certainly feels like he is reaching for it. It has depth and complexity. It is funny at times but is generally filled with ache and regret. The film is crammed with story and beautiful moments. When one thread seems resolved, it moves on yet again to another. All of Allen’s themes drift through the conversations of the characters, but they seem to have less conviction than they ever had. There seems to be a consistent lack of solidity to these lives. It seems like things matter, but then you come to accept that they don’t. There are so many characters I can hardly begin to list them.

The main character is Bobby Dorfman (Jessie Eisenberg), and his family is central to the story. Bobby’s mother, Rose (Jeannie Berlin) tries to get him to go to Hollywood to work for Phil Stern (Steve Carell), her brother and a big-shot Hollywood agent. Another important thread to the story is that of Jessie’s brother, Ben (Corey Stoll), who is a gangster who eventually becomes the owner of a fancy night club. Café Society winds its way from New York to Hollywood and back again. The other central thread is the story of Vonnie (Kristen Stewart), who is a sweet and unpretentious girl who becomes an object of desire for more than one man. Stewart, by the way, has never been better. She radiates warmth and charisma, her smoky eyes and shy smile recalling famous Hollywood movie stars of the past. She does not play a movie star here, but a secretary without great ambitions.

That is the real appeal of Café Society is that it gets a lot of the essence of the past right. The clothes, the sets, the locations, and all the details all seem impeccably right. It is a beautiful evocation of the past. It is hard to know who is left alive who can appreciate that past. It is all there already in all the old movies from the 30’s like The Woman In Red with Barbara Stanwyck, of which a scene from the movie is included. Those old movies are all wonderful, and anyone who cares about movies cannot help but think longingly of those times. The Coen brothers recently released Hail, Caesar ,which also waxed funny and poetic about old Hollywood. The problem is that it may be lost on a modern generation. Why would they care?

I loved the film but can’t say that it really seemed to be very cohesive. It’s like Woody has already said everything he has to say, but he keeps going because he is afraid. Woody is worried about death and loss and regret, and he knows he can’t do anything about it.