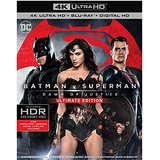 “It’s time for the biggest gladiator match of all time. Son of Krypton versus Bat of Gotham”

Notice in my synopsis that most of is about other characters rather than Superman; draw your own conclusions from there. As initially suspected, this was a platform to bring the Justice League to fruition. That said, it is not necessarily a bad thing, because I must admit that I am sufficiently excited for the upcoming film. To be a sequel to a Superman movie, it seemed to be less about the character that it was inspired by. Don’t misunderstand me; Henry Cavill is featured plenty, but I highly doubt anyone can say that he is the prominent figure of the story. That title belongs to another.

Though Affleck’s performance was excellent and there is no shortage of A-listers in the story, there was one other person who brought an interesting quality to their character, and that was Jesse Eisenberg. Eisenberg’s interpretation gave the mastermind a slightly unhinged quality that I found mildly compelling. The one factor I found lacking was his motivation for wanting to bring down the hero of Metropolis. Clarification on this point would have helped give a better understanding as to who Luthor is as a person. As it is, all we know is that he possesses a great intellect and is severely damaged by repeated trauma in his past. Just something as simple as a brief flashback would have done the trick. Hopefully the character is expanded upon in the extended version.

Now, what about the extended material? I have to say that many of the story issues have not been solved by this extended edition. The film still feels like a series of disjointed vignettes that take an even longer time now to get to the good stuff. The film is an ambitious project intended to accelerate the DC Universe toward what Marvel has already established. Yes, you’ll have more blanks filled in, but you will not really find it a smoother ride.

Batman vs. Superman: Dawn Of Justice is presented in an aspect ratio of 2.40:1. The ultra-high-definition image is arrived at by an HEVC codec. The first complaint might be that the IMAX aspect ratio portions have not been preserved here as they had been for the home video release of The Dark Knight. Your complaints should end right there. This is a dark and moody film. There is disagreement over how good an idea that is. There is no argument that all of this translates into a rather splendid ultra-high-definition image presentation. The first thing you will notice is how deep and pure the black levels are. Shadow definition runs about as deep as I’ve seen in a home theatre setting. There is a nice element of film grain here that works quite effectively to give the film an organic and richly atmospheric feel. Colors blast when the rare chance arrives. The colors are reference, and facial close-ups are pretty spot-on. The green mist of the kryptonite weapons allows a nice ethereal study in contrast and texture. Speaking of texture, you get to see some fine detail on the hero costumes. There is much more to these costumes than my theater screening allowed me to see. The image stays sharp throughout, and you’ll find an illusion of depth even on this non-3D version of the film.

The Blu-ray version of the film only includes the theatrical cut along with quite a few extras.

Jeremy Butler is a film school graduate of the International Academy of Design and Technology. He is been writing for Upcomingdiscs since 2012; however, movies have played a big part of his life for much longer. Favorite genres include horror, science fiction/fantasy, and comedy. Favorite movies are V for Vendetta, Boondocks Saints, Kiss Kiss Bang Bang, and The Godfather.
My Golden Days Café Society