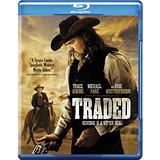 “The story of the American Frontier is a tale of conquest, but also one of survival, persistence, and the grit of the people.”

And the story of the American Western is a tale of quick draw competitions, fights aboard speeding trains, and other assorted horseplay. Each of those elements can be found in Traded, which inelegantly grafts the plot of Taken onto an Old West setting. The problem is that nothing here is executed particularly well.

Traded is set about 20 years after the Civil War. While slaves eventually gained their freedom, we’re told that women were still routinely bought, sold, and (you guessed it!) traded during this time period. Clay Travis (Michael Paré) is a vaguely badass former sharpshooter who has settled into a quiet family life with wife Amelia (Constance Brenneman) and their children Lily (Brittany Elizabeth Williams) and Jake (Hunter Fischer). Unfortunately, the Travis family’s peaceful life is shattered by tragedy.

Wanting to get away from the sullen, toxic environment at home, Lily expresses a desire to become a “Harvey Girl” (a fetching young waitress or hostess) and leaves home. But when Lily goes missing, Clay sets out to find her. His journey takes him from Wichita to Dodge City. It also puts him on a collision course with some unseemly characters, including the ruthless Ty Stover (Trace Adkins) and the sadistic wild card LaVoie (Tom Sizemore).

Despite the presence of established actors like Paré and Sizemore, the first thing you’re likely to notice about Traded is how stilted the performances are. Beyond the flat line readings, the simple story also moseys along at a leisurely pace that unnecessarily pads the movie’s 98-minute running time. The good(ish) news is that the old-fashioned Western genre allows for a stiffer, more classical form of storytelling — John Wayne wasn’t the most naturalistic actor on the planet — so those flaws are a little less glaring here.

What’s harder to hide is the scattershot and clumsy editing, which saps a few sequences (including a deadly card game and the aforementioned train fight) of their energy and effectiveness. Probably the bigger sin is squandering the potential in the story. I liked the post-Civil War setting, but I was especially intrigued by the underexplored angle of how powerless women were during that time. Yet instead of making that the focus — and maybe offering some female characters worth rooting for — it’s merely an entry point to a tired revenge plot that’s been done (better) dozens of times.

Paré cuts a striking enough figure as a reformed gunslinger, but neither the character nor the performance offer much in the way of personality. Clay doesn’t speak much and the writing isn’t nearly good enough to give the words he does speak some punch. On the other hand, Sizemore can probably play this sort of scumbag in his sleep at this point…so he deserves credit for actually showing up and bringing a wild-eyed flair to the proceedings. Adkins — a country singer by trade — absolutely looks the part of a cowboy, but he doesn’t fully sink into his villainous character the way Sizemore does. Kris Kristofferson also pops up as a helpful barkeep, which is cool because…Kris Kristofferson is just cool.

Director Timothy Woodward Jr. — who also teamed up with Sizemore for the atrocious Weaponized — clearly has an affinity for Westerns. It explains why he crammed every signature set piece in the genre into his movie. Here’s hoping that if he ever decides to return to the Old West, the result is better than Traded.

Traded is presented in an aspect ratio of 2.40:1. The 1080p image is arrived at with an AVC MPEG-4 codec at an average of 24 mbps. The film has the dusty palette you’d expect from a Western, and it’s also a bit brighter than most low-budget HD presentations. (The latter sometimes have a flat, overcast pall to them.) And while the detail isn’t razor sharp — especially during any scene in a darkened saloon or brothel interior — there is a solid amount of texture in terms of the period costumes and sets. Very solid overall, but nothing surprising or spectacular here.

The DTS-HD Master Audio 5.1 track includes some nice separation for Samuel Joseph Smythe’s score, which sounds as if it emanates from the front speakers before gradually spreading to the rears. Gunshots have a nice pop, and there are a few instances of dynamic directionality. (Besides the gunplay, a scene where someone sings “Skip to My Lou” in another room has the sound originating from one of the rear speakers.) Even the subs get in on the action, thanks to a train sequence that produces a subtle, low rumble.

Five Minutes to Dodge — The Making of Traded: (8:02) It’s not surprising to hear director Timothy Woodward Jr. speak enthusiastically about Westerns. (I also wasn’t all that shocked to learn was his first shot at the genre.) The filmmaker also talks about the challenges of making a period piece and reveals that Michael Paré was the first casting choice (and the rest of the cast fell into place after him). Some of the other actors also pop up to discuss their (mostly dastardly) characters.

Deleted Scenes: (5:32) There are two scenes and they each come with optional commentary from Woodward. The first gives Clay’s former flame Nell (Natalia Cigliuti) a different send off, while the other is a new introduction to Trace Adkins’ slimy Ty Stover. In a vacuum, the scenes are fine, but I can understand why they were cut since they would’ve disrupted whatever flow the movie had. Features a Play All option.

The idea of an Old West Taken is promising, but the filmmaking team behind Traded didn’t display the particular set of skills required to deliver an exciting adventure. Only recommended for the hardcore Western completists out there who will watch anything with horses and six-shooters.

Peter – The Redemption The Boy Who Cried Werewolf