The Boy Who Cried Werewolf 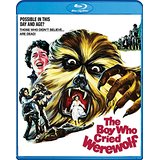 The Boy Who Cried Werewolf (1973) is an interesting collection piece for fans of horror film. It marks the end of Universal’s long-standing tradition of double-billing B-horror films from the 1930’s onward. That being said, The Boy Who Cried Werewolf and its companion film Sssssss (1973) are the physical evidence of the end of an era. This particular release drops the double- billing tradition, which is rather confusing to me, simply because the Universal Studios distributing system’s historical relevance is worth more to me than the actual film. Outside of the context that I have provided, this film doesn’t have many interesting qualities.

Recently divorced father Robert Bridgestone takes his son, Richie, to his secluded summer cabin. While walking through the woods one night, the two are attacked by a werewolf. After a struggle, Robert is able to throw the creature off the cliff, but not before he was bitten. Now Robert must cope with this ailment in addition to the responsibilities of being a single father. The film also outlines Richie’s complex position during the ordeal. Richie tries to tell his dad about the ailment, but his dad thinks Richie has an overactive imagination. Richie doesn’t want to tell the police, for fear they may harm his caretaker.

This film is more reminiscent of The Wolf Man (1941) than the werewolf films I enjoy watching. I appreciate The Wolf Man’s legacy, but from 1941 to about 1979, there were a lot of very similar films about werewolves. It wasn’t until John Landis’s An American Werewolf in London (1981) that the ‘werewolf’ subgenre of horror film really hit its stride. I consider the 1980’s to be the golden age of werewolf films, as there are so many memorable titles. Possibly because the stories became more complex, the monsters became more frightening, and the deaths became more gruesome. The Howling (1981), Wolfen (1981), The Company of Wolves (1984), Silver Bullet (1985): these are all fantastic horror films for the sake of writing, cinematography, special effects, and set design. The Boy Who Cried Werewolf offers too similar a story to The Wolf Man, but none of the impressive editing or lighting techniques of the latter.

What this film does offer are night chase sequences clearly filmed in broad daylight, a painfully slow transformation sequence that is played 6-8 times, and rather strange nonsensical writing choices. I mentioned earlier a “complex position” Richie is placed within, but now that I think about it, I may have just been looking for something to be interesting. You can certainly make an argument for the social relationship between a boy and his father around the crucial “coming of age,” but the film doesn’t seem to want to focus on that concept. In fact, the film doesn’t seem to want to focus on anything at all, honestly. There are several characters introduced, developed halfway, then forgotten. For example, an evangelical Christian hippie commune led by an Allen-Ginsberg-esque character. These ideas might have looked smart and fresh on paper, but they just became awkward placeholders on screen.

It is difficult to rate this tile lower than a two. I really appreciate the film’s historical context, but it is not a fun watch by any means. It is also difficult to give this film a low rating because, unfortunately, I have seen worse films about werewolves. While this film does lack focus, it still manages to get its recycled plot out in about 90 minutes, which is more than I can ask for in this cinematic climate of overlong remakes. If you do have an interest in this film, I urge you to seek out a copy of Sssssss as well in order to immortalize the end of Universal’s double-billing distribution strategy.