Posted in: Disc Reviews by Brent Lorentson on August 12th, 2016 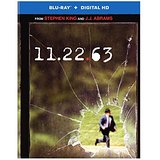 What if you were given the chance to step back in time; would you take this opportunity to change the world, even if it meant having to kill someone for the “greater good”?  This is the question that kicks off the story that is 11.22.63, from the novel written by Stephen King.  Sure, merely mention Stephen King and many automatically people think of the man as the master of contemporary horror.  Yet some of his prolific works that have made their way to the big screen and have gone on to be classic pieces of cinema are less about horror and more about friendship and the deepest bonds we can share with another.  Stand By Me, The Shawshank Redemption, and The Green Mile are just a couple examples of King’s more profound works, and for a moment 11.22.63 could have stood right alongside these titles.

Hulu is the streaming company that set out to adapt 11.22.63 as their way to take their streaming service to the next level and begin to stream original content.  When I first heard there was going to be adaptation of the book, I was far from excited; after all, most of the mini-series that had come before just turned out to be lackluster executions of the stories I loved.  (Yes, even IT I felt missed the mark in several ways that had me hoping this next attempt will be better.) What gave me a little hope, though, was hearing about the involvement J.J. Abrams would have with the project, how his name alone would elevate this past Mick Garris mini-series we got throughout the 90’s.  With eight episodes, would Hulu and Abrams be able to step up to the plate and deliver?

Jake Epping (James Franco) is struggling at this point in his life.  He’s making ends meet as a high school teacher, but emotionally is in a rut after his wife asks him for a divorce.  He’s a man with no attachments and no direction beyond the classroom.  This is what attracts Al (Chris Cooper) to want to reach out to Jake to help him do what he no longer can, to prevent the assassination of JFK.  To accomplish this task Jake will have to step through a doorway in the back of Al’s kitchen; this doorway doesn’t just lead to supplies for the diner but also a doorway that can take Jake to the year 1960.  Once Jake steps through and experiences 1960 for the first time, we of course know he’s going to agree to help save the President, but it’s what he does with his time before that fateful day where the story really is.

The first couple episodes work as a way of helping us get to know Jake while also setting up the rules of the show.  Anyone who’s seen a time travel film knows there are rules when going back in time, and there are consequences, so of course something as big as preventing an assassination of a president is going to have some pretty major side effects, one can only hope for good.  In 1960 Jake is able to help one of his students who on Halloween night experiences a pretty horrific domestic dispute. We get to see how far Jake is willing to go to change the past to make things better while at the same time changing who he is.  This is also where he meets up with Bill (George MacKay) who goes on to be his partner in pursuing Lee Harvey Oswald.

It’s when the series gets to Jodie, Texas where the show shifts gears, where Jake gets himself a teaching job to support him, at least until the day he needs to stop Oswald in Dallas.  For those who have read the book, this is also where we meet Sadie Dunhill (Sarah Gadon), who is the new school librarian.  Personally, this was the portion of the book I loved the most and wanted to see how this was handled, because this really is the heart of the story.  People who haven’t read the book may be bored by this; after all, you’re expecting a story about stopping an assassination, but suddenly you’re thrust into this romance story.  This is where the series suffers the most.  Even loving this portion of the book, this also seems rushed. While the chemistry between Franco and Gadon works, for the sake of the story since the series couldn’t commit to the full relationship, it easily feels like filler that could have been removed.

It’s during this filler portion we also get to know Oswald (Daniel Webber). While Oswald is such a disliked figure in American history, the series attempts to humanize him as best it can.  We get glimpses into how Oswald could be tied into numerous conspiracies but we are only allowed to peek so far; after all, if we find out he’s the monster the world imagines him to be, Jake could just shoot him, and all the suspense is gone.

Once the show is on the final two episodes, it manages to suck us back in and it becomes the taught thriller we would hope this series would be.  Even with 8 hour long episodes you can’t cram everything from the book into this series.  While this is a fairly faithful version of the story, the series is very much its own beast that stands alone.  Unfortunately there isn’t a storage room for the series to pass through and polish the things it came so close to getting right.

11.22.63 is presented in the aspect ratio 1.78:1.  The 1080p image is arrived at with an AVC MPEG-4 codec with a range of 14-24 MBPS.  Despite having some really great cinematography and beautiful set design, the series still manages to have a distinct made- for-television look.  In the final episode we get to see them play with filters and color palettes for different looks, but it’s not enough to make the image stand out.  The majority of the show has a very warm and clean look to it; after all, at this time you could argue that America still had its innocence, but in the modern world things get a cooler, saturated look.  While there are no compression issues, and for the most part the black levels are sharp, it’s more or less average for what you get on TV.

The DTS-HD Master Audio 5.1 track is a very clear track that has clear dialog throughout.  The dynamic range is great at times when they are in bars or in exterior settings.  The music from the time period is well placed, and the score is impressive in the more suspenseful moments.

When the Future Fights Back: (15:13) A brief look at the making of the mini-series and what inspired Stephen King to write the story.  Has a lot of archival footage mixed in as well from the days leading up to the fateful day of the Kennedy assassination.

While the book is one of my favorites of King’s, this is a series that comes so close to getting it right that it frustrates me when it falls short.  The opening episodes give us so much promise, but the middle portion becomes a rushed mess.  For those willing to hang out with the final three episodes, the show manages to tie it all together.  Overall, it may not be perfect, but there are still moments where the series shines.  For history or time travel buffs, this one may be for you.

Brent Lorentson is a horror writer and film critic based out of Tampa, Florida. With a BA in Digital Film, he co-wrote and co-directed Scavenger Hunt. His short stories have appeared in various horror anthologies. In 2019 his short script Fertile Blood will be a part of the anthology horror film Slumber Party. He is currently working on his first novel A Dark and Secret Place set to be released in late 2019. Favorite Films: Taxi Driver, Fight Club, I Saw the Devil, The Wild Bunch, Dawn of the Dead, A Clockwork Orange, Pulp Fiction, Heathers, The Monster Squad, and High Fidelity.
The Boy Who Cried Werewolf The Blacklist: Season 3 (Blu-ray)