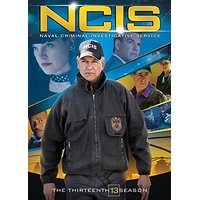 NCIS continues to be one of the top dramas on television. After 13 years, that’s a hard trick to pull off. With two spinoffs enjoying a pretty nice run, there are nearly 500 episodes of the franchise. The show just received a rare two-year extension and doesn’t appear to be slowing down. The show has seen a lot of changes over the years. Cast members have come and gone, but a strong core has remained for the long haul. More changes are on the horizon. Michael Weatherly leaves after this season. He’s certainly been one of the more beloved members of the original cast. It will be a tough road, but something tells me the show is going to be just fine. If Season 13 is any indication, NCIS is a long way from slowing down.

Season 12 ended with a shot Gibbs (Harmon) fighting for his life. Of course, he survives, but not without a few changes. For at least the early part of the season, Gibbs becomes a bit more reflective. He also appears to have a better appreciation for the team. Jon Cryer joins the cast as Dr. Cyril Taft, who saves Gibbs’s life. He ends up joining the team as the new guy.

One of the reasons for this is the writing and the cast. There appears to be a symbiotic relationship here that is unlike anything else you’re likely to encounter on television. Everyone here appears to genuinely like everyone else. I’m not talking about the love-fest stuff you always get in interviews or release bonus features. There’s a bounciness that pervades the show both on and off the screen. The writers appear to flourish with that kind of energy and find ways to reveal character elements that are new each season. Over 13 years that can’t be easy. The truth is, however, that these guys make it look deceptively easy. Each character gets their time to shine, and this season has given us numerous highlights for each, allowing us to see something in them that we haven’t seen before.

The season continues to balance the procedural drama with the lives of the characters. It does this without sacrificing story. It also doesn’t need to resort to the musical-beds drama that is too often the default. It’s surprising that after so many years, there are still things to learn about these folks. There is still character evolution going on. That means actors who still enjoy the roles and look forward to growing them.

Ducky (McCallum) discovers a brother he didn’t know he had. There’s another wonderful flashback episode that, once again, is a highlight of the season.  Bishop (Wickersham) and McGee (Murray) go undercover as a couple, which is quite a revealing story.  Of course, Abby (Perrette) is the focus of the crossover episode with NCIS: New Orleans when she believes her brother has been killed in a strange aircraft accident. Jamie Bramber returns as Bishop’s husband, and that story comes to a head here. He’s having an affair, so that’s splitsville for the couple. We also meet Bishop’s mother, played by guest Lindsay Wagner. Even Vance (Carroll) goes back out in the field with Gibbs on a case that involves an ex-agent that Vance once busted. Di Nozzo has his identity stolen over and over again in one of my favorite Tony episodes. The season ends with a multi-episode hunt for a deadly British spy, played by Vance Nappo.

You get all 24 episodes and a small selection of extras. There’s an appropriate tribute to Weatherly. There’s the traditional half-hour season summary. You also get the crossover episode with NCIS: New Orleans. But the big news is the exit of Tony to deal with family and another nice, and likely final, guest spot for Robert Wagner. But it’s the payoff of another Tony relationship that leads to his exit. Don’t want to spoil that for anyone who hasn’t seen it yet. It’s actually a nice emotional sendoff. Tony’s gone. Time to deal with it. “We’ve lost agents before, haven’t we?”

Gino Sassani is a member of the Southeastern Film Critic's Association (SEFCA). He is a film and television critic based in Tampa, Florida. He's also the Senior Editor here at Upcomingdiscs. Gino started reviewing films in the early 1990's as a segment of his local television show Focus. He's an award-winning recording artist for Omega Records. Gino is currently working on his 8th album Merchants & Mercenaries. Gino took over Upcomingdiscs Dec 1, 2008. He works out of a home theater he calls The Reel World. Favorite films: The Godfather, The Godfather Part II, The Body Snatcher (Val Lewton film with Karloff and Lugosi, not the pod people film), Unforgiven, Gladiator, The Lion King, Jaws, Son Of Frankenstein, The Good, The Bad And The Ugly, and Monsters, Inc.
The Affair: Season Two The Jungle Book (2016) (Blu-ray)