Posted in: Disc Reviews by Gino Sassani on August 29th, 2016 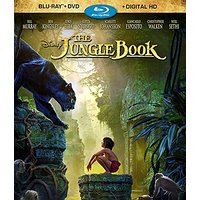 “This is the law of the jungle…”

Disney appears to have a law that all of its classic cartoon features must now be made into live-action films. As I’ve mentioned in my review of the original classic The Jungle Book, the animated feature was the end of an important era at Walt Disney Studios. It was released about a year after Walt’s death and was the last film he supervised from beginning to end. In the wake of Walt’s death the studio experienced a sharp turnover and complete retooling of the animation department. With only the nine old men to carry the traditions of Walt into the future, The Jungle Book would forever mark a distinct milestone in the history of animated feature films.

Enter Jon Favreau and his live-action remake of the children’s classic. There are a couple of things you’ll need to know right from the start. This is not really a live-action film in the traditional sense of the term. The only human character with any prominent role in the film is that of the man-cub Mowgli, played by young Neel Sethi. Glimpses of a couple of other characters exist only for seconds in a flashback scene. The rest of the cast is made up of photorealistic jungle animals brought to life through motion-capture CGI and voice actors. These characters are also not quite the playful creatures you’ve come to know from the animated classic. Favreau has gone for a somewhat darker tone than the animated feature. The stakes are far more real and tragic. This isn’t DC-Universe dark, but it is much more somber than I expected going in. The good news is that it works. You really could not have had such realistic animals acting quite that silly here. It would have made for awkward viewing. Surprisingly it does not take very long to get quite used to these realistic animals talking. Credit smart choices in the voice casting department. Also credit Favreau’s ability to resist the temptation to exaggerate the voices and/or expressions. It all lays out remarkably natural and easy to believe.

“Many strange legends are told of these jungles of India, but none so strange as the story of a small boy named Mowgli.”

The story has also undergone quite a bit of an evolution. Obviously, it’s not so light and humorous. Most importantly, the story has changed quite a bit from the animated feature. This story begins with Mowgli already a ten-year-old member of the wolf pack. The story of how he got there is told in a brief flashback. There is a lot of time spent getting to know Mowgli’s adopted family, and we grow attached to them as beloved characters. That’s going to be important when Shere Kahn shows up, voiced majestically by the superb voice of Idris Elba. Kahn doesn’t just want the boy gone. He wants him dead and begins to take it out on his wolf pack with tragic results. This story provides Shere Kahn with the motivation he lacks except in general terms in the original film. Mowgli’s father scarred his face with fire, what the jungle animals call the red flower. It was just a short reference in King Louie’s song in the original, but here it is pretty much the focus of the story itself. It’s man’s use of fire and its destructive potential that drives many of the characters of this Jungle Book. The fiery conclusion is not going to leave you with the same tone as the cartoon. This isn’t really a kids’ movie at all. There are consequences with the finality never expressed in Walt’s vision. Yes, some characters will die this time around.

Before long you get the impression that this is not really the same story. Favreau understands instinctively, however, that there are expectations. So he manages to tell a very different tale that makes all of the familiar stops along the way. King Louie, the swinging beatnik, played by Christopher Walken, has been transformed to a deadly serious shadow of Brando’s Godfather character. Ka is voiced by Scarlett Johansson, and you’ll forget about the gender change as she provides the hypnotic voice that here provides the back story for Mowgli that we never had before. She doesn’t sing here. Only two of the original songs are in the film itself. We get I Wanna Be Like You with new lyrics and the iconic The Bare Necessities. Johansson does provide the Trust In Me ditty during the end credits if you’re smart enough to stick around. You’ll also get the King Louie number with the original lyrics. Ben Kingsley is perfect as the panther Bagheera, who narrates the film as the character did in the original. Missing are the Feathered Fab Four vultures, who no longer provide a contemporary cultural presence. Also missing is the elephant military theme. In fact the trunked heroes don’t even talk in this version. They are revered by the other animals. A big change from their being an annoyance to Bagheera in the original film. They are indeed pivotal to the end of the film but provide the service in silence.

Of course, the star of the original was the lovable bear Baloo, voiced here by Bill Murray. I’m going to anger a few folks by saying I thought he was terribly miscast. Murray’s own wiseacre personality dominates the character and provided the film’s only distraction so grave that it took me out of the film. Don’t get me wrong. He has some really inspired moments in the film, but I had serious trouble separating the man from the character. I won’t deny that the deep voice of Phil Harris was one of the best memories, for me of the original character. Perhaps it’s too hard for me to separate that voice from the character. It’s also true that Murray’s silliness stands apart from the overall darker nature of the film. Not that that’s a bad thing… so before you start loading my gopher fire-ant holes with dynamite, accept this as a personal reaction and not a Bill Murray slight in the least.

The real stars here are the people who created the creatures and environments. CGI and motion capture have come a long way, and this strikes me as yet another quantum leap forward in that art form. It’s a rather interesting coincidence that the Father of Motion-Capture Andy Serkis is working on a Warner Brothers version of the story that was originally due next year but has been pushed back to 2018… just in time for the newly-announced sequel to this film. My expectation is he’ll find a way to make it look even better. That staggers my imagination (and I have a huge imagination) because it doesn’t seem possible the film could have looked any more real. Trust me when I tell you that this is one jungle you’re going to get completely lost in.

The Jungle Book is presented in its original aspect ratio of 1.85:1. The 1080p image is arrived at with an AVC MPEG-4 codec with an average bit rate of 35-40 mbps. The high-definition image presentation is there to display this wonderful world with seamless computer-generated characters and environments with the live-action boy. In spite of these artificial surroundings, the image looks remarkably natural. Lighting comes through with nice detail and misty texture. Colors are often muted, mostly due to the darker color correction. The animals display details that shows various textures and surface detail. A giant shed snake skin is quite accurate. Take that from a guy who sees the real thing on a daily basis. Blacks are not really inky or particularly black, but there’s still nice shadow definition. Contrast brings us beautiful spokes of light piercing through the night.

The DTS-HD Master Audio 7.1 is not as aggressive as I might have expected. The surrounds are used more to build on the superior atmosphere than to light up an audio presentation. The experience is subtly immersive, bringing you nicely into the jungle environments. The sub response is what adds that final layer of depth and dynamic range to everything from dialog to the emotional score.

The Jungle Book Reimagined: (35:01) John Favreau leads the discussion of the film from a deli table. There’s ton of behind-the-scenes stuff here. We get to see the orchestra recording the score with honored guest Richard Sherman who wrote the original film’s songs with his late brother Roger. He even added the new lyrics for this film. We get to see all aspects of the f/x from the motion-capture to pre-viz and conceptual art. Voice actors talk about their roles, and we see some of those recording sessions. All the participants have a lot to say about the original film.

I Am Mowgli: (8:18) This feature focuses on the young actor Neel Sethi and the filming process with the boy. His enthusiasm is rather infectious.

King Louie’s Temple: (3:13) A nice piece on Sherman’s visit to the recording session.

There’s a lot to love here, and I fully expect this to become a classic to rival the animated feature. It does what every movie should set out to do. Are you listening, Warner/DC? You can be somewhat dark and deliver the intended cautionary tales and still find a way to entertain the audience. You can be serious, but a movie like this must also feel fun. You don’t go to the movies to be depressed. You go to the movies to “forget about your worries and your strife”.

Gino Sassani is a member of the Southeastern Film Critic's Association (SEFCA). He is a film and television critic based in Tampa, Florida. He's also the Senior Editor here at Upcomingdiscs. Gino started reviewing films in the early 1990's as a segment of his local television show Focus. He's an award-winning recording artist for Omega Records. Gino is currently working on his 8th album Merchants & Mercenaries. Gino took over Upcomingdiscs Dec 1, 2008. He works out of a home theater he calls The Reel World. Favorite films: The Godfather, The Godfather Part II, The Body Snatcher (Val Lewton film with Karloff and Lugosi, not the pod people film), Unforgiven, Gladiator, The Lion King, Jaws, Son Of Frankenstein, The Good, The Bad And The Ugly, and Monsters, Inc.
NCIS: Season 13 The Duel (Blu-ray)