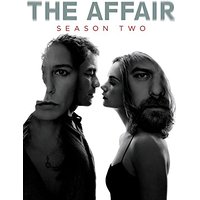 The first season of The Affair — Showtime’s sensual, POV-shifting drama — was built on the notion that there are two sides to every story. The show’s hook was that it depicted the beginnings of the same adulterous relationship from two different perspectives. Season 2 doubles down on that idea by offering four different viewpoints. So what this sophomore season lacks in sizzle compared to its predecessor, it makes up for by offering a more expansive view at complicated, messy relationship dynamics.

“Sometimes you can fall in love with somebody you’re not married to.”

Author Noah Solloway (Dominic West) and former waitress Alison Bailey (Ruth Wilson) have each blown up their lives — and respective marriages — to be with each other. Season 2 covers two different timelines. Most of the action follows Noah as he goes about the messy business of finalizing his divorce from soon-to-be-ex-wife Helen Butler (Maura Tierney) and fighting for joint custody of his four monsters children. Alison has left husband Cole Lockhart (Joshua Jackson) and is co-habitating with Noah while she tries to figure out what to do next with her life. The couple is staying in a guest house owned by influential publisher Yvonne (Joanna Gleason) and her kindly husband Robert (Peter Friedman) while Noah struggles to come up with the right ending for his promising second novel. Noah can’t decide if he wants his story to have a subdued happy ending or conclude with a murder.

We definitely know the choice the creators of The Affair would’ve gone with: the other main timeline in season 2 covers the death of Cole’s low-life brother Scott (Colin Donnell) and the subsequent arrest of Noah for the crime. At this point in the story, Noah and Alison are married and they have a baby. Helen and Cole are also still in the picture for different reasons. The season’s main timeline eventually arrives at the night of Scott’s death, which (naturally) doesn’t quite play out like we’ve been led to believe.

I strongly felt The Affair‘s best asset — other than its alternately enchanting and depression versions of Montauk — was the perspective-warping format that made Noah and Alison the stars of their own individual stories and encouraged viewers to spot the differences. Creators Sarah Treem and Hagai Levi — who previously experimented with TV drama conventions with HBO’s In Treatment — actually started straying from their original conceit by the end of the first season. It turned out to be a smart decision because it conditioned us for what was coming down the pipeline.

The most overt change is that Helen and Cole are now POV characters. (The second half of Ep. 1 introduces Helen as a protagonist in a sly way.) Almost every episode is still divided into two “Parts” told from two different perspectives, which is smart because cramming four perspectives into every hour would probably be exhausting. It also broadens the show’s world, since the characters are comparatively scattered at this point. Season 2’s impressive roster of guest stars also includes Richard Schiff (as Noah’s high-powered attorney), Cynthia Nixon (as a marriage counselor who turns up for an extended scene that is straight out of In Treatment) and Catalina Sandino Moreno (as the new woman who catches Cole’s eye.)

Most of all, it gives additional screen time to Tierney and Jackson, who get to expand on the quietly terrific work they did in supporting roles during the first season. Tierney, in particular, gets a fierce and funny showcase in Ep. 4, when Helen dumps her newest love interest (Noah’s pal max, played by Josh Stamberg) and proceeds to make a series of disastrous decisions. Meanwhile, Jackson — so moody and morose during the first half of the season — probably has the most satisfying arc as Cole slowly comes alive again.

“I hate everyone…can we go now?”

That being said, there’s no way around the fact that practically everyone on screen is awful and narcissistic, which doesn’t always make for the most pleasurable viewing experience. (And it’s not just the cheating adults; Noah’s kids are often actively terrible, and Helen’s haughty mom Margaret — played very well by Kathleen Chalfant — might be the worst person on the show, even though she’s one of the few who didn’t stray from her marriage.) Season 2 tackles tough, un-sexy subjects like divorce mediation, custody disputes, and the challenges of building trust in a relationship where both people previously cheated. Ep. 10 features a therapy session between Noah and Nixon’s marriage counselor where he makes the case that those who stray from their marriage are not inherently bad people.

Of course, Narcissistic Noah takes it too far by comparing himself to Great Men (who were also cheaters) like Alexander Hamilton and Thomas Jefferson. Initially, I was a little conflicted by the casting of a strapping actor like West to play a neutered, neurotic novelist. However, season 2 deepens Noah’s illusions of grandeur. (The most apt comparison Noah makes is likening himself to Ernest Hemingway.) Wilson still has the most dimensions to play, since Alison alternately appears to be an irresistible temptress and a damaged woman trying to find her way. (Depending on who is interacting with her.) The actress pulls them both off convincingly.

The Affair: Season 2 features all 12 episodes on five discs. Special features include “Character Profiles” (Disc 1), “Tour of Montauk” (Disc 2), “Memory Lanes” (Disc 3), and the first two episodes of the Showtime series Billions (Disc 5). Season 3 is set to premiere in November.

Season 2 ends with a courtroom cliffhanger that needs to be resolved. More importantly, the show continues to find interesting ways to break from its established format: the most obvious example is Ep. 9, which abandons the two-part structure and uses time stamps to trace the whereabouts of all four main characters during a hurricane. It’s the most significant break in form for the series, but it also doesn’t quite stick since Eps. 10-12 return to the two-part structure. Still, it’s an encouraging sign that the show’s brain trust isn’t afraid to try to new things to spice up this Affair.