Posted in: Disc Reviews by Brent Lorentson on August 31st, 2016 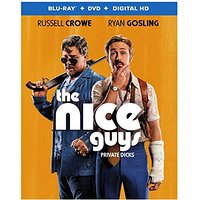 Writer/Director Shane Black (Lethal Weapon, Iron Man 3) has a way of writing flawed characters who manage to leave more lasting impressions than the films they populate. But where he shines is when he can thrust these flawed individuals into the confines of a detective story.  Most people grew their fondness for Black and his quick-witted dialog when he first penned Lethal Weapon, but for me it goes back to The Monster Squad and The Last Boy Scout, where I found myself becoming a fan even in my early years of film watching.  So is the fanboy in me excited to see what Black brings to the table this time around?  You betcha. In a summer popcorn season filled with comic book movies, sequels, and other films targeting the teenage demographic, it’s nice to have an action film that harkens back to the good old days (the 80’s and early 90’s) for a fun comedy/action romp that has a foul-mouthed edge.

It’s 1977 Los Angeles, where the headlines at the time were filled with the dangers of all the smog in the air.  This is the backdrop to the story that kicks off with the mysterious death of a famous porn star, Misty Mountains (Murielle Telio). Despite all the headlines, her mother refuses to believe she’s dead, so she’s hired Holland March (Ryan Gosling) to find out what really happened to her precious little girl.  Working on a case of his own, Jackson Healy (Russel Crowe) is a muscle for hire who is put on a job to help a young girl, Amelia (Margaret Qualley) get rid of some men who are after her.  It doesn’t take long before both March and Healy find themselves working together, as their cases seem to be connected.

Just as we may think we have the plot figured out, Black throws in a twist by bringing in Kim Basinger as the head of the Department of Justice who enlists the help of Healy and March.  In typical buddy-cop film fashion, there is of course plenty of action and violence.  Just because the film is titled The Nice Guys, both characters manage to do some pretty horrible things in the film, but manage to stay charming throughout.

In a lot of ways I see this film as a spiritual sequel/prequel to Black’s directorial debut Kiss Kiss Bang Bang, as though he is creating his own detective world in LA.  While there are numerous similarities to previous works of Black, the one thing that struck me the most was how fun this is and how fun the characters are.  It’s as though his films have made the transition from being brooding and angry to simply wanting to kick back and have a good time.  But it’s not a film that goes for cheap laughs like an Adam Sandler or Kevin Hart film; here the laughs are earned without being talked down to. Go figure, a smart comedy that manages to also not be pretentious.  But the film does have one major flaw that bugged me.  There is a moment around the second to third act transition where things just sort of change for the characters and they’re motivated to go to an auto show.  I feel this is an editing issue, because there simply feels like there is a scene or two that has been removed and it just kind of messed with the pacing of the film.

As the film goes into its third act, I understand why many people will have a problem with it, as it kind of goes a more slapstick route and feels like an Abbott and Costello routine.  Personally I’m still on the fence with this; it’s silly, but really nothing sillier than other sequences in the film.  But when I heard a critic actually say this was horrible and too spoofy, I just shook my head wondering what movie he just walked out of.

The Nice Guys is hilarious and entertaining throughout.  As the film riffs on numerous detective shows and Raymond Chandler stories; for fans of film noir and gumshoe detective stories, this movie should just tickle your geek spot.  As for the casual movie fan who just wants to have a good time, the film delivers and has a great soundtrack along with it.  One thing I’m also willing to bet, there will at least be a few lines from this film that are quote-worthy classics.

The Nice Guys is presented in the aspect ratio 2.40:1.  The 1080p image is arrived at with an AVC MPEG-4 codec at an average of 28 mbps.  This is a beautiful polished piece of 70’s noir that is put on display.  There is a lot of color that pops on the screen, from the suits we see Gosling in, to the array of colors we get during the porn party.  We get a sharp image, and with the higher bit rate we are able to see more of the detail that is captured, from the stubble of hair to the textures in the clothing.  But the most impressive bit in this transfer are the black levels, where not only do we see detail in dimly lit rooms, but the night shots still hold plenty of detail separation.

The DTS-HD Master Audio 5.1 track is what you’d hope to get out of an action/ noir film.  What stand out are the impacts from the numerous fight scenes.  The punches feel painful when they connect, and when we get the added bone-crunch effects, it’s enough to make you wince.  The dialog is clear throughout, which is good, because you’ll want to hear all of quick-witted dialog. It’s a well-balanced mix that hits in all the right places, especially with the thunderous explosion as a car rips through a house in an opening sequence.

Always Bet on Black: (5:27) A very short behind-the-scenes look at Shane Black and the unique style he brings to the film and genre. For a guy who is such an icon to the buddy action genre, I expected more out of this and to hear about how he writes.

Worst. Detectives. Ever: (6:16) Not much different from the previous supplement, but this time we get to hear from the cast as they discuss their characters and how they fit into the film.

The film still holds up after a second viewing and is still a fun action comedy.  While I still feel Kiss Kiss Bang Bang is a better film, The Nice Guys is still a really fun film with many laugh-out-loud moments.  The chemistry between Crowe and Gosling is great. It would be great to see them together again, but it may be a while.

Brent Lorentson is a horror writer and film critic based out of Tampa, Florida. With a BA in Digital Film, he co-wrote and co-directed Scavenger Hunt. His short stories have appeared in various horror anthologies. In 2019 his short script Fertile Blood will be a part of the anthology horror film Slumber Party. He is currently working on his first novel A Dark and Secret Place set to be released in late 2019. Favorite Films: Taxi Driver, Fight Club, I Saw the Devil, The Wild Bunch, Dawn of the Dead, A Clockwork Orange, Pulp Fiction, Heathers, The Monster Squad, and High Fidelity.
The First Monday in May Lucifer: The Complete First Season