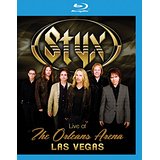 It all started back in the early 1960’s when Chuck and the late John Panozzo got together with another kid on their Chicago block named Dennis DeYoung and started to play a little music. By 1970 guitarist James “JY” Young joined the band, and they recorded a few minor albums. In 1975 their first hit Lady would put the band on the map, and when Tommy Shaw joined as a singer/writer/guitarist for the Crystal Ball album, the top of the pop charts would be the band’s new neighborhood for the better part of a decade. There’s little doubt that the band peaked in the late 1970’s with The Grand Illusion and Pieces Of Eight. It’s amazing how many hit singles came from just two LP’s: Come Sail Away, The Grand Illusion, Fooling Yourself (Angry Young Man), Blue Collar Man, Sing For The Day, and Renegade. Recently the band cashed in on those glory years by performing a world tour of those classic albums live and in their entirety.

The band’s changed since the albums were released. Dennis DeYoung and Tommy Shaw have both had stints of running the band without the other. Now Dennis is gone, apparently for good, and has been replaced by Laurence Gowan, a Canadian musician who came to my attention over 20 years ago. I have several of his hard-to-find CD’s and have loved his music for years. John Panozzo passed away, and his brother Chuck isn’t really doing so well these days. Chuck’s been replaced by Ricky Phillips on bass. Chuck does make an occasional appearance for a song, but it’s sad to say and see that he looks rather worn out. While it was great for the guys to welcome him along, I was bummed by his look and lack of energy. He was an important part of the band, and I would absolutely have loved seeing him back in form. The drums are handled by Todd Sucherman, who replaced John when he became ill.

The band has focused on the live music in recent years. Instead of CD’s, the band has moved toward the home video market for its concerts. The best of these was a live performance of the Pieces Of Eight & Grand Illusion albums a couple of years ago. It remains one of my favorite concerts on Blu-ray. It was also released by Eagle Rock. This release is something very different indeed. Styx Live At The Orleans Arena was filmed during their 2014 Soundtrack Of Summer Tour. They were on a triple bill with Foreigner and Eagles legend Don Felder. In fact, Felder makes an appearance playing guitar. The show took place in Las Vegas’ Orleans Arena and is a relatively short set. Of course, some of it may have been and likely was edited out. To fill that time, this release has a rather unusual format. There are interview segments before each song that venture into topics from life on the road to the cliché favorite song. We get interview clips from the entire band including Chuck and many of the tour crew. While there are some nice gems to be found here, I find the format distracting. They kind of thought about that possibility. I say kind of because while you may watch the concert without these interview clips, you may not watch the interview clips without watching the entire concert.

So what about the concert itself? Of course, there are some classics here, but I found the song selection a bit below par for the band. Certainly, that’s always going to be a matter of opinion. It appears they opted for the rock-edged energy songs, and I’m sure it was a smart choice for the live crowd. But the home video audience is not always the same kind of crowd. The performances are tight but not exceptional. This band can and does sound better. The Pieces Of Eight/Grand Illusion performance was one of the most flawless live shows I’ve ever seen. This one had a few rough edges and either came at the very beginning or end of the tour. It’s essentially a completist release.

Too Much Time On My Hands

Fooling Yourself (The Angry Young Man)

The concert is presented in its original aspect ratio of 1.78:1. The 1080p image is arrived at with an AVC MPEG-4 codec at an average of 30 mbps. This high-definition image presentation delivers a clean, sharp image with solid black levels. The close-ups take you right on the stage. The show is accented with five LED panels that deliver a plethora of images to compliment the music. You do get a true reproduction of the entire experience. The light show can be bright with pinpoints of light piercing the dark stage. Nice contrast brings it all to life brilliantly.

The DTS-HD Master Audio 5.1 is better than the LPCM stereo mix. There is a serious issue here. The interview clips are mixed hotter than the concert. It’s a really bad choice. In order to get the full dynamic musical experience I had to deal with loud interview bits with hiss because of the volume. That said, the concert itself doesn’t have the punch I expected here. I had to crank this up. I was also disappointed in the subs, which didn’t give me the “feel” of the music at all. The mix itself was pretty good. Vocals did stand out quite nicely as did lead breaks.

I’ve been a fan of the band since I was a kid in the 1970’s. I still listen to the old records, and I’ve seen them live in a few of their incarnations over the years. I always jump at the chance to review one of their concert videos, but I was disappointed in this one. Perhaps my expectations are high after their last Blu-ray. I don’t think so. There isn’t near the effort put into it here. The disc comes in a cardboard slipcase that is usually reserved for CD’s. Nitpicks? Maybe “I’ve got too much time on my hands”.

Gino Sassani is a member of the Southeastern Film Critic's Association (SEFCA). He is a film and television critic based in Tampa, Florida. He's also the Senior Editor here at Upcomingdiscs. Gino started reviewing films in the early 1990's as a segment of his local television show Focus. He's an award-winning recording artist for Omega Records. Gino is currently working on his 8th album Merchants & Mercenaries. Gino took over Upcomingdiscs Dec 1, 2008. He works out of a home theater he calls The Reel World. Favorite films: The Godfather, The Godfather Part II, The Body Snatcher (Val Lewton film with Karloff and Lugosi, not the pod people film), Unforgiven, Gladiator, The Lion King, Jaws, Son Of Frankenstein, The Good, The Bad And The Ugly, and Monsters, Inc.
Mountain Men The Flash: Season 2 (Blu-ray)