Posted in: No Huddle by Gino Sassani on September 22nd, 2016 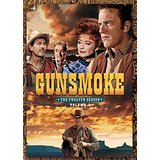 The two season halves have been released at the same time. It offers you the opportunity to buy it all together, and why wouldn’t you? You get 29 episodes on eight discs total. The only extras are a few episode promo spots.

Highlights from the season include: The opening episode Snap Decision. The Marshall ends up killing an outlaw who had helped him out of a jam. The guilt drives him to quit. Of course it doesn’t stick. We still have eight episodes to go, but it was actually one of the highest-rated episodes of the series. Bette Davis stars as a widow who kidnaps Kitty and lures Matt where she intends to hang him just as her dead husband was hanged. She blames Matt in The Jailer. Darren McGavin guest stars as a murderer-for-hire out to kill Matt but ends up hurt when he does the right thing in helping another man. Maybe that’s why they called it Gunfighter RIP. In Mad Dog, can you believe that Festus gets mistaken for a ruthless gunslinger? It’s true. He gets offered $300 to run a gang out of a town they are plaguing. In Muley, yet another gunslinger out to kill Matt gets distracted. This time it’s one of Kitty’s saloon girls that grabs the killer’s attention. The season ends with the explosive Nitro 2-part episode. A drifter is forced to mix the dangerous explosive for a gang who want to use it to “open” a bank.

This was nearly the end of the series. It had actually been cancelled when the network president reversed the decision at the last minute. It would change nights to Monday. The 12 season was made famous by Pink Floyd when they used a line from the episode Fandango on The Wall album. It’s one you’ll hear spoken in the background from a audio clip of the show. Even though Matt Dillon was slated for television limbo that year, “The stubborn, ornery United States Marshal’s gonna recover.”

Gino Sassani is a member of the Southeastern Film Critic's Association (SEFCA). He is a film and television critic based in Tampa, Florida. He's also the Senior Editor here at Upcomingdiscs. Gino started reviewing films in the early 1990's as a segment of his local television show Focus. He's an award-winning recording artist for Omega Records. Gino is currently working on his 8th album Merchants & Mercenaries. Gino took over Upcomingdiscs Dec 1, 2008. He works out of a home theater he calls The Reel World. Favorite films: The Godfather, The Godfather Part II, The Body Snatcher (Val Lewton film with Karloff and Lugosi, not the pod people film), Unforgiven, Gladiator, The Lion King, Jaws, Son Of Frankenstein, The Good, The Bad And The Ugly, and Monsters, Inc.
Wonders Of The Arctic (UHD Bluray) (4K) Marauders (Blu-ray)