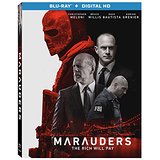 “Does doing things the legal way really make it better?”

Since movies are at their core a form of escapism, they have a way of glamorizing anyone who violently slashes through the red tape of the criminal justice system. It helps explain the enduring appeal of vigilante/revenge movies and it’s probably why we’re meant to root for the charitable bank robbers in Marauders. While the movie contains some cool flashes of style and occasionally bumps up against some interesting ideas about justice, it ultimately gets way too bogged down in red herrings and pointless subplots.

Marauders opens with a brutally efficient robbery that leaves a bank manager dead. The heist attracts the attention of a trio of FBI agents: Jonathan “Monty” Montgomery (Christopher Meloni) is the intense special agent in charge with a dark side; Stockwell (Dave Bautista) is a burly, wisecracking friend of Monty’s; and Wells (Adrian Grenier) is a clean-cut hot shot straight out of Quantico. Monty gets a surprise when police find the fingerprint of a supposed dead man at the crime scene. He also gets a minor shock when he discovers the thieves donated the $3 million they stole to charity.

The bank they robbed is owned by the shady and ruthless Jeffrey Hubert (Bruce Willis). While the crooks made off with millions of dollars of his money, it also turns out the dead bank manager had a connection to an ill-fated military operation involving Hubert’s younger brother. Unfortunately, that only scratches the surface of an overly tangled plot that also includes dirty cops, dead or dying spouses, and closeted politicians. The result is that the Robin Hood-style thieves often feel like they’re getting squeezed out of their own movie.

Director Steven C. Miller strives to capture the grimy palette of early David Fincher movies — the aggressive rain during the bank heists recall Seven — but comes up with a few inspired flourishes of his own. In addition to the intimidating, skeletal masks worn by the robbers, they use cool tech (a speaker that blares instructions) that prevents them from having to use their voices. Marauders was also filmed in Cincinnati and, while the location isn’t quite front-and-center within the story, it does offer a somewhat fresh setting for some of these action shenanigans we’ve seen before.

Speaking of action, Marauders is actually a bit lighter on the fisticuffs and gunplay than you might expect. I wouldn’t mind that so much if it was in the service of a compelling story, but the movie takes a quantity over quality approach to its plot. Simply put, there’s too much of it. Given that we have three main FBI agents on the case, did we really need an additional group of crooked cops? And did the leader of those crooked cops (Johnathon Schaech) need to have a tragedy waiting to happen at home to motivate him? (Especially when Monty has his own domestic demons to deal with.) There are other subplots — including one involving an ambitious reporter — that get unceremoniously dumped as the movie proceeds to its conclusion. And considering all the set-up and fakeouts, that ending (an abrupt, vigilante-friendly coda) is somewhat of a letdown.

At least Marauders coaxes some solid performances out of its leads. Meloni, who spent more than a decade playing cops and perverts on Law & Order: Special Victims Unit, carries the action very capably with his tough guy bravado. Bautista brings a poor man’s version of the scene-stealing humor he displayed in his breakout Guardians of the Galaxy role, while the blandness Grenier (still fresh-faced at age 40) displayed on Entourage actually serves his square character well. Heck, even Willis — who looked like he’d taken a sleeping pill before each of his scenes in the recent Extraction — stirs awake for a few moments here. (Most notably, when he and Meloni go face-to-face in Hubert’s office.)

Marauders is presented in an aspect ratio of 2.40:1. The 1080p image is arrived at with an AVC MPEG-4 codec at an average of 36 mbps. The bank robbery sequence that opens the movie features some stark contrast: we get a blue-ish/gray palette for the rainy exteriors, while there’s a warmer, yellow-gold tint inside the bank. Fine detail is most striking when the action slows down and we get a close-up look at the raindrops falling down and at the bank robbers’ masks. That level of detail — which can also be found in the textured walls during several scenes — helps lift what is otherwise your fairly standard, digitally-shot, straight-to-home video action romp.

The DTS-HD Master Audio 5.1 track is aggressive from the start, which happens to fit this material quite well. The subs offer a low rumble that supports the propulsive score by Ryan Dodson. There’s exceptionally nice pop and dynamic action throughout all speakers, especially during a violent bank robbery in the middle of the movie. Dialogue is clean throughout and well-balanced with the other sonic elements.

Commentary with director Steven C. Miller and cinematographer Brandon Cox: Early on, Miller and Cox explain this is their second time working together (after Extraction) and the pair have a chummy rapport. There’s plenty of good humor and information as they point out production details (pretty much all the rain was as fake as the spider in Willis’ first scene) and dole out praise to the city of Cincinnati.

The Making of Marauders: (13:17) Miller talks about wanting to make a gritty love letter to the films of David Fincher. As is the case with most of these featurettes, it devolves into a lovefest among cast and crew, though Bautista (who is used to rehearsing a lot) admits he had some difficulty adjusting to his director’s fast style.

Deleted/Extended Scenes: (7:21) There are five scenes overall and two of them expand the relatively insignificant role of an ambitious reporter. (The theatrical version already had enough subplots.) The best involves Meloni’s Monty in jailhouse face off.

Cast/Crew Interviews: (32:11) There are separate interviews with director Steven C. Miller, actors Christopher Meloni, Adrian Grenier, Lydia Hull (Agt. Chase), Dave Bautista, and cinematographer Brandon Cox. The actors each describe their characters and what attracted them to the project, while Cox talks about wanting to channel films like Seven, Heat, and Prisoners with the movie’s visual palette.

While you may not exactly feel robbed after you’ve watched Marauders, I can’t recommend you run out and snatch it up either. It’s got a good lead performance and some stylish sequences, but they’re ultimately weighed down by a too-bulky plot. I feel like that’s a fair assessment and not too harsh of a slam, but then again “nobody ever thinks they’re the bad guy.”