Posted in: The Reel World by Brent Lorentson on September 23rd, 2016 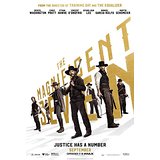 Great, just what we need, another remake of a film that is not only a classic, but the film which it was inspired by is also a highly-praised classic.  I’ll admit I’ve grown tired of Hollywood going to the well and remaking films that simply don’t need to be messed with.  It’s one thing to see Seven Samurai (1954) translated for American audiences to go from a black & white martial arts spectacle to seeing a colorized star-studded western, The Magnificent Seven (1960).  When I first heard about the remake, I had hopes that the film would be modernized yet again, but unfortunately the studios decided to keep the setting in the Wild West, and even when Denzel Washington was hired on to head the film with Antoine Fuqua (Training Day & The Equalizer) in the director’s chair, I still wasn’t convinced.  Then that first trailer came out, and instantly I was on board.  In a lot of ways this is the riskiest film for Fuqua and company to tackle, since it seems the studios still seem to be afraid of the Western genre, but after this remake I can only hope we see this genre get the revival it deserves, because this incarnation of The Magnificent Seven is the kind of popcorn excitement that was missing in theaters this past summer.

The town of Rose Creek is under the control of a ruthless industrialist, Bartholomew Bogue (Peter Sarsgaard), who aims to buy/steal the land out from under everyone in the town so he can mine it for all the gold he can find.  He’s a scumbag in the worst way and has no problems with putting a bullet into anyone who stands up to him. The opening sequence sets the stage as we get to see Bogue shoot down members of the town in cold blood.  He’s a vision of power with a lust for violence that simply makes its mark on the viewer, which is important in this case because we really don’t get to spend much time with Bogue and his cronies.  Sarsgaard plays this role so well; he seems to be having fun playing such a deplorable character who practically steals every scene he has on the screen.

With the town to afraid to stand up and fight back, it’s the widow Cullen (Haley Bennett) who takes it upon herself to find help to not only avenge her husband’s murder, but to protect her town before Bogue takes it all.  Here is where we meet Chisolm (Washington), a gun for hire who reluctantly takes her offer, and he immediately starts to organize his group of mercenaries to defend the town.

What I’m going to suggest is that if you’re a fan of the previous films, try not to get hung up on who is playing who from the core seven, simply because though there are similarities without a doubt, this version is its own beast. Josh Faraday (Chris Pratt) is a swindler and a gunslinger who is a bit of a darker character than we are used to seeing Pratt play.  There’s a particular card trick we see him pull towards the start of the film that if not for Pratt’s natural charm he brings to the role, this character would be far less endearing, and simply put, shows why Pratt is quickly on his way to mega-stardom.  Though Faraday may be playing second fiddle to Chisolm, the chemistry between the two comes through on the screen, which leads me to the character of The Angel of Death, Goodnight Robicheaux (Ethan Hawk).  This may be the juiciest role in the film, considering we’re seeing Hawk playing the part of a vicious assassin who seems to have lost his edge and has gone on to make a career for himself out of the legend of his past.  In many ways I see Robicheaux as a reflection of how we see our mythic heroes from the days of the Wild West.  They stand tall in their stories, but the reality is that these men are broken survivors who seemed to have gotten lucky simply by pulling the trigger faster than the man at the end of their gun barrel.  For Faraday, looking upon Robicheaux he may see the legend, but clearly he disbelieves the stories, but at the same time Faraday is looking at the man he could possibly end up as if he’s lucky to stay alive as long as Robicheaux.  Maybe I’m reading too deeply between the lines with these two, but that’s what happens when you get the right actors in great parts, where it’s not just the dialog they exchange but everything else going on in the scene with them.

Another standout is Vincent D’Onofrio, who plays Jack Horne, a mountain of a man who is a loveable brute force.  Filling out the rest of the team of mercenaries is Vasquez (Manuel Garcia-Rulfo) a Mexican bandit, Red Harvest (Martin Sensmeier) an Indian outcast from his tribe, and Billy Rocks (Byung-hun Lee) Goodnight’s deadly quick-draw assistant.

While it does take a bit of time to gather up the team of mercenaries, the film doesn’t waste time in getting them to Rose Creek, and once they do arrive, it’s not long till the bullets fly and the blood is shed.  While I’m on the topic of the violence, I’m a bit surprised by the PG-13 rating this came away with.  This film has perhaps one of the most vicious body counts for a non-fantasy film.  But what makes these shootouts and explosions so darn impressive is what seems to be the lack of CGI on display.  Even better is the stunt work we see performed throughout the film; this is the ultimate tip of the hat to the good old days of filmmaking, and it makes a difference.

The famous Elmer Bernstein score does make a brief appearance, and though the score is so iconic, I’m glad they chose to go a different direction with the music.  It seems we got a taste of some of the last music James Horner ever scored in the film with Simon Franglen sharing the credit.  While the score isn’t near the same icon status, it does have a distinct Horner feel and is a reminder to how much he will be missed on the American cinema stage.

While it’s too early to say if this is a film that will go on to live in infamy like its predecessors, The Magnificent Seven is the kind of film I believe Hollywood and audiences need.  This is popcorn fun at its finest, and it is a beautifully-shot throwback to the way movies should always be made, without the reliance on CGI.  The love and respect for the genre is evident on the screen, and hopefully this will inspire the heads of the studios to take more chances on other genres that don’t involve superheroes or found footage.

Brent Lorentson is a horror writer and film critic based out of Tampa, Florida. With a BA in Digital Film, he co-wrote and co-directed Scavenger Hunt. His short stories have appeared in various horror anthologies. In 2019 his short script Fertile Blood will be a part of the anthology horror film Slumber Party. He is currently working on his first novel A Dark and Secret Place set to be released in late 2019. Favorite Films: Taxi Driver, Fight Club, I Saw the Devil, The Wild Bunch, Dawn of the Dead, A Clockwork Orange, Pulp Fiction, Heathers, The Monster Squad, and High Fidelity.
Teenage Mutant Ninja Turtles: Out of the Shadows (UHD Blu-ray) (4K) In-Lawfully Yours