Posted in: Disc Reviews by Brent Lorentson on September 22nd, 2016 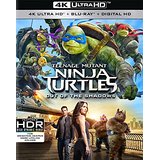 Growing up I was obsessed with the Teenage Mutant Ninja Turtles animated series; it was the Saturday morning cartoon I just couldn’t get enough of.  When I couldn’t watch the cartoon, I’d be playing with the toys and eventually the video game back in the original Nintendo console days.  So when the movies came out, my parents had no choice but to take me to see them.  Back in those days we had the turtles in rubber suits; as a kid the experience was fun but still just not as good as the cartoon.  As I got older, well, those original films seem to hold up less and less, and when the news came that an updated version of the film would be coming out I got a little excited, that is till I saw the trailer for the 2014 film.  Sure, it had elements from the cartoon, but it just didn’t look inspired; it just looked like a generic kids’ film with passable CGI. The result was simply a blunder, and I would have thought the days of seeing a Teenage Mutant Ninja Turtle movie were numbered.  But here we are in 2016 with the new film Out of the Shadows ready to hit the big screen, and, folks, it’s been nearly 30 years in the making, but FINALLY we get the Teenage Mutant Ninja Turtles movie we’ve been waiting for.

Stepping in to fill the shoes as director is Dave Green. He’s relatively a newcomer in Hollywood, but it’s his vision I believe is responsible for the success of the film.  His previous film Earth to Echo is simply a wonderful kids’ adventure film that captures the energy of the 80’s Spielberg films, most notably ET.  Well, he carries that love for the 80’s into this new installment of the Teenage Mutant Ninja Turtles franchise and injects so much life into it, my inner ten-year-old was cheering with glee over this film.  This is just about the closest I’ve seen an animated series come to life on the big screen and manage to retain what made the animated series so much fun.  This isn’t a film for grownups; instead this is a film that targets the ten-year-old in all of us, the one who doesn’t question the logistics of flying manhole covers, talking brains, or humans transforming into hulking beasts.

Our heroes, Leonardo (Pete Ploszek), Raphael (Alan Ritchson), Donatello (Jeremy Howard), and Michelangelo (Noel Fisher) return and have been injected with a lot more personality this time around.  What stands out the most is we get to see them as more than just generic character blurbs. We get a more three-dimensional look to these characters who each have a struggle they are dealing with. Whether it’s feeling like a failed leader, or just wanting to belong, these are struggles that viewers can actually understand and relate to, and that’s a factor that was missing the first go around.

Out of the Shadows takes place a year following the events of the previous film, and our re-introduction to the Turtles is immediate, rather than the nearly half-hour wait in the first installment.  Shredder (Brian Tee) is on his way to prison, the Foot Clan (Shredder’s henchmen) and scientist Baxter Stockman (Tyler Perry) have a plan to help him escape.  This escape sequence is just over-the-top bananas, and it’s great.  Sure, there have been great chase scenes before, but this fits into its own category of silly cool action, and this just sets the story in motion for even more over-the-top cartoonish action.

As part of the escape plan, a portal is opened, and it shoots Shredder into another dimension, where he meets Krang (voiced by Brad Garrett).  For those with no clue who or what Krang is, well, he’s a giant talking brain who lives in the confines of a robot that he controls.  He’s gross and menacing and has some crazy plans for Shredder and the Turtles, and that includes this mysterious canister of purple ooze.

Two of the new additions to the film are the fan-favorite misfit characters Bebop (Gary Anthony Williams) and Rocksteady (WWE’s Sheamus).  Seeing that these two were going to be in the film had me excited, but I was worried how they would be handled, because after all, these are characters that we know at some point in the film will be transformed into a giant Warthog (Bebop) and a Rhino (Rocksteady).  The CGI looks great with these two, but what works best is the actual chemistry between Williams and Sheamus, who play well off of one another.  And when the two have their moment to shine in the film, it’s simply more over-the-top fun.

But personally the addition that had me most excited is Casey Jones (Arrow’s Stephen Amell).  This version of Jones is different, but still is practical for the story at hand.  My only major complaint is we don’t get to see enough of Casey in his trademark hockey mask or him kicking enough Foot Clan butt (though something tells me there will be a sequel coming). Now Jones is a cop who has hopes for one day being a detective, but with Shredder, Bebop, and Rocksteady escaping under his watch, things don’t look too promising.

Of course there will be haters for the film, and the target is going to be on Megan Fox, who returns as April O’ Neil.  In the first film I can agree that the casting was just not right, but this time around it seems director Dave Green was able to squeeze out a better performance, and also the writers gave her a little more to work with.  Sure, Megan Fox has the sex appeal factor, but I wouldn’t dare say that is a bad thing.  What matters was the chemistry she had with Amell. I liked what I saw, and hopefully we’ll get to see their story continue to blossom.

Besides all the action we get in the film, we also have a well-crafted storyline involving the Turtles and them coming to terms with who they are. The subtitle Out of the Shadows seems to be centering on their struggle with having to hide from the public eye while trying to live their lives as normally as possible as they also attempt to fight crime.  This goes into the struggle with how the world may see them, which of course we’ve seen before as far back as Frankenstein.  But this struggle is something that manages to cause a divide amongst the brothers as some wish to be accepted by the outside world, while others have already come to terms and have accepted who they are.  It’s an easy concept that will hopefully reach its young target audience.

Teenage Mutant Ninja Turtles: Out Of The Shadows is presented in its original aspect ratio of 2.40:1. The Ultra high-definition image is arrived at by an HEVC codec. This is the kind of film that really finds a home fast in the 4K format. The first thing you will notice is the detail and sharpness of the turtles and their environments. There’s a lot of detail to be found in the sewer HQ. The production design put a lot of Easter eggs and just plain stuff in here, and this disc allows you to take it all in. Colors pop all over the place, from the brightness of the Knicks logo on the arena floor to the brilliant flashes of ooze and light. Textures are above average. I particularly noticed the wonderful realism of the cloth masks. This is all CG, but it looks absolutely real. You can see frays on the edges and tears. There is a little oversaturation in the reds. It’s not bad, and I resolved it with a slight decrease in my monitor’s saturation level. Black levels are deep and just loaded with nice detail. It’s quite easy to get fully immersed in this universe because of the sharp resolution and vivid colors. That’s not to say the grittier sewer world doesn’t shine just as much with more muted color but detail that is just as high in quality.

The Dolby: Atmos audio presentation defaults to a dynamic 7.1 surround track. The first thing that surprised me was just how much dialog gets placed in the surrounds. Characters are talking from every direction throughout the film. Of course, the score brings a nice explosive element as do the… well… explosions. Your subs will pick it all up nicely, and there are more than one room-shaking moments. The mix allows everything to shine in its own space while delivering a truly 360 degree space to contain you well within the action. It’s an over-the-top world, but you’ll be surprised how much this audio and video can immerse you within its own reality. It’s a show-off piece for your new 4K system.

We Are Family: (8:15) This is a character profile on the Turtle characters and the actors who play them. We get plenty of footage of the motion-capture work and get to see the camaraderie of the actors themselves.

Whoa! – Expanding The Turtleverse: (14:19) The character profiles extend now to all of the other characters in the film with special attention to those added for this particular film.

House Party: (6:18) Cast and crew give it up for the production design of the lair. You get to see the set details and some of the props up close.

It’s Tricky – Inside The Van: (4:08) OK, so it’s not a van. It’s a garbage truck. The actual vehicle has tons of props, and we get to go inside and explore it all. Just don’t push any buttons.

ILM – The Effects Beneath The Shell: (3:02) This is an f/x reel. You see various layers of f/x leading to the final shot in a series of montage videos set to the film’s music.

Did You Catch That? – Turtle Eggs: (3:02) A look at some of the many Easter eggs planted throughout the film.

Deleted Scenes: (4:54) There are only three with a handy play-all option

This is what a summer movie is supposed to be.  Two hours of silly fun that let you escape from reality as well as the heat.  This is the movie I have been waiting for since I was a kid. I finally got to see my favorite animated heroes come to life to kick Foot Clan butt and devour pizza like I always hoped to see.  Now it’s the passing of the torch to a new generation to enjoy the turtle power.

Brent Lorentson is a horror writer and film critic based out of Tampa, Florida. With a BA in Digital Film, he co-wrote and co-directed Scavenger Hunt. His short stories have appeared in various horror anthologies. In 2019 his short script Fertile Blood will be a part of the anthology horror film Slumber Party. He is currently working on his first novel A Dark and Secret Place set to be released in late 2019. Favorite Films: Taxi Driver, Fight Club, I Saw the Devil, The Wild Bunch, Dawn of the Dead, A Clockwork Orange, Pulp Fiction, Heathers, The Monster Squad, and High Fidelity.
Marauders (Blu-ray) The Magnificent Seven (2016)