Posted in: No Huddle by Jeremy Butler on September 26th, 2016 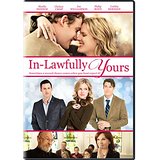 This movie definitely gives credence to the saying, “keep it in the family,” given that it features the two leads falling in love. I know what you’re thinking: that’s nothing new. Almost every story in existence features a love story in one fashion or another. You are correct, but here’s the kicker: they are both married into the family; he to their deceased daughter and she to their cheating son. That should make things a bit awkward around the dinner table at the holidays.

Nothing like walking in on your husband with his mistress, who also happens to be his assistant. That is the moment that defined the end of Jesse’s marriage. At that point you usually just walk away and only communicate through lawyers, but in her case, the tragic death of her father-in-law forces her to remain a part of their lives. Though divorced, Jesse remains behind to help her former mother-in-law with packing up her family home in order to move in with her ex-husband, whose callousness also extends to his own family, as the audience will discover under the guise of a sneaky, underhanded deal that he is negotiating.

If there is anyone in need of a second chance at love, it is clearly this woman. As luck would have it, that opportunity comes in the form of her brother-in-law, Ben, a widower and the local pastor in the town of Bethel Cove. Their romance is a rocky one as this city girl finds herself out of place among the simple townsfolk who don’t exactly welcome her with open arms. It’s further complicated by the sudden reemergence of her ex-husband who is desperate to win her back.

The film has a root in religion, given that Ben is the town’s local pastor. As such, the story remains somewhat tame. Despite this, there are plenty of enjoyable scenes courtesy of the quirky sense of humor and total ignorance of religion of our charming female lead, Chelsey Crisp. Whether solo or in her scenes with her romantic partner, Crisp is a delight, maintaining an upbeat attitude despite being a pariah and catching her husband in flagrante delicto. The two definitely have chemistry that comes out most prominently during their back-and-forth banter regarding religion. Wait till the scene where she interrupts his sermon to ask some age-old question. It’s good for a chuckle.

In-lawfully Yours has all the makings of a Hallmark movie. In fact, I was surprised to learn that it wasn’t one. As such, it is intended to play up the good attributes of the characters; even the antagonist (the ex-husband) is not evil despite his misgivings; he’s just a horrible human being. Though this principle is understood, it does make the story slightly unrealistic in certain areas, such as Jesse’s reaction when she finds her ex cheating. Albeit the tragedy with his father pretty much occurred simultaneously, I still feel there need to be a little more throwing of things and yelling if you wanted to make the matter more relatable.

I am not in the target audience for this film, in that I prefer things blowing up or inappropriate jokes. I must admit that I got a kick out of the story all in all. I won’t say that it is something that I would set out to watch, but I might linger on the channel long enough to get a feel for the story. In the long run, I can see it finding a home on the Hallmark Channel. So if you are someone who frequents that channel, I’d be on the lookout.

Jeremy Butler is a film school graduate of the International Academy of Design and Technology. He is been writing for Upcomingdiscs since 2012; however, movies have played a big part of his life for much longer. Favorite genres include horror, science fiction/fantasy, and comedy. Favorite movies are V for Vendetta, Boondocks Saints, Kiss Kiss Bang Bang, and The Godfather.
The Magnificent Seven (2016) The Frank Sinatra Collection (2nd Wave)