Posted in: No Huddle by Gino Sassani on September 26th, 2016 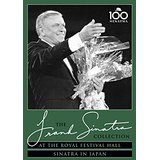 Last Spring Eagle Vision released four discs that were collectively known as The Frank Sinatra Collection. But when a man’s been singing for nearly 70 years, you can’t hold a career like that on just four discs. There was always going to have to be more. The more has arrived in the shape of three more DVD’s brimming with Sinatra. This time there are 3 DVD’s to add to the growing collection. Each features performances, often from television specials. Each is a landmark even in Sinatra’s incredible career. Each will bring you back to that ol’ Blue Magic.

This one is not a television special. Recorded at the famous venue on November 16, 1970. It was a special performance that was introduced by Princess Grace of Monaco. Of course, Frank knew her best as Grace Kelly, and the two of them starred together in High Society with Bing Crosby and Louis Armstrong. Frank’s monologue jokes about her winning a gold record for singing in the film, which was something he had not accomplished yet back in 1956. This is a straight-out concert, and seldom have I seen Sinatra so loose. He does far more ad libs in the songs than he usually did. The band was also one of the tightest. One gets the impression it was a personal gig for Sinatra, and he likely considered it one of his favorites.

You Make Me Feel So Young, Pennies From Heaven, I’ve Got You Under My Skin, Something, The Lady Is A Tramp, A Get Along Without You Very Well, Didn’t We, One For My Baby, I Will Drink The Wine, I Have Dreamed, My Kind Of Town & My Way.

The concert was recorded on April 18, 1985 and is the most recent show in the collection so far. It is also the only show in the collection to include a 5.1 audio presentation. That means the songs sound just that much brighter here, and this is certainly the best audio we have on these discs. It had been 11 years since Sinatra had been to Japan, and it’s obvious he’s having a blast here. It begins with an instrumental musical retrospective of Sinatra’s career with album covers, stills, and movie clips. Sinatra changes one of the lines in I Get A Kick Out Of You that does not appear to be a mistake. It might have something to do with respecting Japan’s sensibilities with the drug culture. This concert also features a ton of instrumental solos which I rather enjoyed. It’s one of the more “complete” Sinatra experiences in the collection. Sinatra might have insulted the citizens of both Chicago and New York when he adds Yankee Stadium as one of the things he loves about… Chicago in My Kind Of Town, oops.

The Lady Is A Tramp, Fly Me To The Moon, My Way, I’ve Got You Under My Skin, Something, I Get A Kick Out Of You, My Kind Of Town, Someone To Watch Over Me , All Or Nothing At All, Mack The Knife, Luck Be A Lady, L.A. Is My Lady, Strangers In The Night, Come Rain Or Come Shine, Pennies From Heaven, One For My Baby & The Theme From New York, New York.

It’s back to the television specials with this performance. It aired on NBC on November 18, 1973. This was one of Frank’s retirement return concerts. There were at least three of them over the years. He had called it quits in 1971 not for the last time. The concert starts out with some of Frank’s very early classics. Then he sits at a bar on a stool for one of his saloon classics with a smoke and a drink while he belts out a medley.

The highlight of this show comes when Gene Kelly joins Sinatra on stage. There are some clips of dance routines from their movie days together. There’s a good bit of friendly banter while they do a medley of song and dance routines that is bookmarked with We Can’t Do That Anymore. Kelly is a terrific guest, and there is truly magic being captured here. It was certainly an historical television moment at the time. Toward the end of Kelly’s segment you notice all of the scuff marks he created during his dance routines. I suddenly felt bad for the guy who had to remove them. Not because of the work involved, but because it would have to have been a painful duty. Somehow it seems right that they should have still been there today. I guess I wanted to think I could go somewhere and see them for myself. Trust me, I’m not usually subject to such romantic notions.

You Will Be My Music, I Get A Kick Out Of You, Street Of Dreams, I’ve Got You Under My Skin, I’ve Got The World On A String, Last Night When We Were Young, Violets For Your Furs, Here’s That Rainy Day, We Can’t Do That Anymore, Take Me Out To The Ballgame, For Me And My Gal, Private Skinny, Nice ‘N’ Easy, Let Me Try Again, Send In The Clowns & You Will Be My Music Reprise

This was a live television concert from Madison Square Garden and introduced by Howard Cosell for ABC. The entire concert is treated like a boxing event. Sinatra comes out with what look like corner men, and the stage is set up in the middle of the floor like a boxing ring would be for the many fights held at the famous venue. It was October, 13 1974, and this is the largest crowd of the collection shows. The camera guys take some rather uncomfortably close shots of audience members. Some of these folks are truly bizarre looking, to say the least. More than a few are quite elderly with the kind of makeup you see in funeral parlors on the guest of honor. These were strange choices, indeed, and a little eerie for my tastes. Frank gets them on their feet when he sings Bad Bad Leroy Brown, the Jim Croce favorite, and security has to take control during the song. It looks like we just missed a take-down that must have been pretty dramatic, because it draws everyone’s attention away from Sinatra. Frank is also a little testy in this concert. You can tell he’s not in a good mood and complains about feedback on the microphone. He’s also too far removed from the orchestra who are off to the side and on the floor. Frank even has to quiet the crowd, yelling out to them admonishing that “we only have an hour”. This is the weakest of the shows, in my opinion.

Instrumental Medley, The Lady Is A Tramp, I Get A Kick Out Of You, Let Me Try Again, Autumn In New York, I’ve Got You Under My skin, Bad, Bad Leroy Brown, Angel Eyes, You Are The Sunshine Of My Life, The House I Live In, My Kind Of Town & My Way

There is a third disc that includes a 1957 Christmas special with Bing Crosby. It’s pretty much scripted, and I don’t suspect there’s any actual stage singing going on here. That’s followed up by an hour collection of songs from various 1950’s television appearances. This collection also includes some interview footage with Frank’s kids: Tina, Nancy, and Frank, Jr.

A collection like this leaves hope that there is more to come. There are certainly still many milestone Sinatra performances out there to cover. I suspect that clearance issues are somewhat of a nightmare. It’s about time someone started to collect all of these moments in a collectable collection like this one. Sinatra was a talent who only comes along once in a century. That someone would start to put it all together? “What were the chances?”

Gino Sassani is a member of the Southeastern Film Critic's Association (SEFCA). He is a film and television critic based in Tampa, Florida. He's also the Senior Editor here at Upcomingdiscs. Gino started reviewing films in the early 1990's as a segment of his local television show Focus. He's an award-winning recording artist for Omega Records. Gino is currently working on his 8th album Merchants & Mercenaries. Gino took over Upcomingdiscs Dec 1, 2008. He works out of a home theater he calls The Reel World. Favorite films: The Godfather, The Godfather Part II, The Body Snatcher (Val Lewton film with Karloff and Lugosi, not the pod people film), Unforgiven, Gladiator, The Lion King, Jaws, Son Of Frankenstein, The Good, The Bad And The Ugly, and Monsters, Inc.
In-Lawfully Yours Warcraft (UHD Blu-ray) (4K)