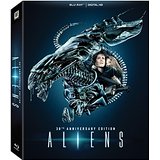 “A creature that gestates inside a living human host…and has concentrated acid for blood.”

If you’re a fan of sci-fi, horror, or action films, chances are you’re also intimately familiar with the creature at the center of the Alien franchise. Ridley Scott’s 1979 original is a masterpiece of space horror, so it would’ve been foolish for any follow-up to try and replicate the same formula. Instead, James Cameron’s classic sequel succeeds by transplanting an entirely new genre into the series (Aliens is basically a war movie) while maintaining the sense of terror that made its predecessor a classic. You can get a fresh look for yourself now that Fox has released a 30th Anniversary Edition.

Ellen Ripley (Sigourney Weaver) was a crew member aboard the Nostromo, a spaceship that was infiltrated by the lethal, titular creature in Alien after answering a mysterious transmission. At the start of Aliens, Ripley — the sole surviving crew member — has been drifting through space in stasis for 57 years when she is discovered and debriefed. Naturally, her account of the events aboard the Nostromo is met with extreme skepticism by her employers at the Weyland-Yutani Corporation

Meanwhile, the exomoon LV-426 — where the Nostromo originally encountered the alien eggs — has become a terraforming colony. When all contact is lost with the colony, smarmy Weyland-Yutani representative Carter Burke (Paul Reiser) persuades a traumatized Ripley to return to LV-426 to investigate. They are accompanied on this mission by a colorful and brash group of Colonial Marines who have absolutely no idea what they’re in for when they arrive.

It’s such a simple idea on paper — “for the next movie, lets just add *more* Aliens!!” — but it needed to be executed with an underrated amount of finesse for this film to truly resonate. (If you want some context, 2016 is essentially a graveyard for sequels that were dead on arrival.) While Cameron’s movie does undeniably kick the action from Scott’s original up several notches — a formula the director would successfully repeat with his own Terminator 2: Judgment Day — there are still plenty of touches that nod to the original, including a gut-busting reference to the most famous scene in Alien. This movie also enlisted special makeup effects maestro Stan Winston (who had worked with Cameron on the first Terminator) to bring his own spin to H.R. Giger’s iconically terrifying designs.

Aliens also benefits from having one of the most compelling action heroes (male or female) we’ve ever seen in the movies. Ripley is both understandably traumatized and emotionally frayed after her ordeal in the first film, but retains the toughness and ingenuity that allowed her to survive in the first place. Weaver earned a well-deserved Oscar-nomination for her work here, which is unheard of these days for a genre-movie like Aliens. It’s no surprise that Ripley is easily the most competent character in the film. Cameron’s filmography is littered with strong female characters (most notably Sarah Connor), and Aliens is the pinnacle of that idea. I mean, you could make the case that Jenette Goldstein’s Private Vasquez is the toughest Marine on screen. The movie also makes the not-so-subtle case that the Alien Queen and Ripley are different, protective sides of the same coin.

In addition to displaying mastery over action and atmosphere, Cameron (who also wrote the screenplay) created a memorable bunch of characters, including a great new “artificial person” in Bishop (Lance Henriksen keeps us on edge the whole time by being so friendly, given what happened with the synthetic character in the first film), and Bill Paxton’s panicky Private Hudson (an audience surrogate for how any of us would freak out in this situation). The most significant misstep is Carrie Henn’s resourceful little girl, Newt. I get that the character is there to kickstart Ripley’s maternal instinct, but she largely ends up being an annoying magnet for trouble. And Henn’s constant screeching made me wish this movie adhered to the original’s “in space, no one can hear you scream” tagline.

But that’s a minor quibble for what is, simply put, one of the best sequels of all time and one of the best action movies of the last 30 years. Speaking of those 30 years, let’s see how this anniversary edition holds up.

Aliens: 30th Anniversary Edition is presented in an aspect ratio of 1.85:1. The 1080p image is arrived at with an AVC MPEG-4 codec at an average of 26 mbps. The movie very rarely shows its age thanks to this impressive HD presentation. There is strong fine detail throughout (an early close up of Ripley after a bout of night terrors is particularly striking) and medium shots consistently allow you to appreciate the texture in the movie’s production design. Stan Winston’s killer creations also get the spotlight they deserve thanks to inky black levels that offer great separation and shadow detail, so you can always discern what’s happening when the Colonial Marines are being terrorized. On the other hand, there are less than a handful of shots that are distractingly soft, including a brief moment between Ripley and Bishop at about the 2 hour, 5 minute mark. And while, there are subtle hints of filmic grain throughout, there are also several obvious instances where noise reduction was applied. Thankfully, the movie largely retains its organic grit.

The DTS-HD Master Audio 5.1 track is the A/V superstar on this disc. This is a top-to-bottom immersive experience from the start, with the subs providing an effective rumble whenever one of the heavy duty vehicles (most notably, the loader that figures into the climactic fight) appears on screen. (Not surprisingly, those same subs will make your home theater quake when the grenade launchers come into play.) There is also dynamic directionality when the bullets start flying from one speaker to the next or when the sound of an approaching Alien can be heard in one of the rear speakers, which helps convey the sense of dread the survivors in the story are feeling. James Horner’s Oscar-nominated score is pitched perfectly, flooding the sound field when it’s appropriate but otherwise laying low. In short, this is a spectacularly immersive sonic presentation that packs the punch you’d expect from one best action flicks in recent memory.

All of the bonus material has been ported over from previous Aliens Blu-ray releases, including the disc featured in 2010’s great Alien Anthology. This disc allows you to switch between the 1986 Theatrical Version and the 1991 Special Edition by clicking on the Extras section of the Main Menu.

I tend to prefer conversational commentaries, but that’s simply impractical with the sheer number of people on this track (recorded in 2003). We do get some of that refreshing jokiness during the parts that feature the actors who played the Colonial Marines, and it’s cool to hear Christopher Henn (whose part in the movie was cut out of the theatrical version) get his say. Otherwise, this is an excellent, expansive, informative track that offers a look at every aspect of the production.

Introduction by James Cameron: (0:34) This is only available for the Special Edition, and it features the director (through voiceover) calling this version “more intense and more suspenseful” than the theatrical cut. (In case it wasn’t obvious, Cameron states this is his preferred vision for Aliens.)

Final Theatrical Isolated Score by James Horner: This special feature allows you to watch the film with the final version of Horner’s Oscar-nominated score, which underwent extensive re-tooling during post production. Presented in Dolby Digital 5.1 and only available for the 1986 Theatrical Version…

Composer’s Original Isolated Score by James Horner: …and, just for the sake of comparison, we also get to hear Horner’s initial score for the film. If nothing else, this special feature and the one before it are a nice showcase for the late, Oscar-winning composer. Presented in Dolby Digital 5.1 and only available for the 1986 Theatrical Version.

Deleted and Extended Scenes: (19:57) There are 16 entries total, and the best is an extended sequence that introduces us to Newt’s family and their deadly close encounter with a facehugger. There’s also a very effective early scene involving the fate of Ripley’s daughter and, um, we also find out what Corporal Hicks’ first name is. The scenes are available in the Extras menu of the Theatrical Version, while the Special Edition allows you to activate a marker that notifies you when you’re watching material that wasn’t in the original cut. Presented in HD.

As fantastic as Aliens still is — and as great as it looks and (especially) sounds on this disc — I have to downgrade this 30th Anniversary Edition for offering almost nothing in the way of new material.

From what I can tell, the only new additions are a set of 10 collectible cards featuring concept art from the film and a booklet spotlighting art from Dark Horse Comics’ “Aliens” series. While the art and the more substantial Blu-ray case are admittedly cool, I can’t say it totally justifies you run out and grab this iteration of Aliens if you already own it.