Posted in: Podcasts by Gino Sassani on September 30th, 2016

Fans of The Johnny Carson Show know who Joan Embery is. If you love animals you know who she is. She has been working with and for animals all of her life. She’s been an ambassador to the world famous San Diego Zoo. Time Life is releasing its second collection The Tonight Show With Johnny Carson The Vault Series. Joan Embery appears in some of these 12 full episodes. I had the honor of talking with her for a short time. I invite you to eavesdrop on that conversation. Bang it here to listen in on my conversation with Joan Embery 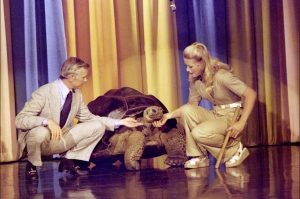 Gino Sassani is a member of the Southeastern Film Critic's Association (SEFCA). He is a film and television critic based in Tampa, Florida. He's also the Senior Editor here at Upcomingdiscs. Gino started reviewing films in the early 1990's as a segment of his local television show Focus. He's an award-winning recording artist for Omega Records. Gino is currently working on his 8th album Merchants & Mercenaries. Gino took over Upcomingdiscs Dec 1, 2008. He works out of a home theater he calls The Reel World. Favorite films: The Godfather, The Godfather Part II, The Body Snatcher (Val Lewton film with Karloff and Lugosi, not the pod people film), Unforgiven, Gladiator, The Lion King, Jaws, Son Of Frankenstein, The Good, The Bad And The Ugly, and Monsters, Inc.
Aliens: 30th Anniversary Edition (Blu-ray) Patterns