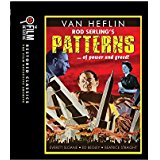 Before The Twilight Zone, Rod Serling had a fruitful career writing teleplays in the early 1950’s. One of his earliest successes, Patterns (1955), was aired on a program named Kraft Television Theatre. The popularity of the play was so enormous that a second encore performance was aired the same week of its release, and it was written as a feature film the following year. Given its impressive history and my love of Serling’s writing, I was really looking forward to watching the the film. However, I was surprised that I did not enjoy myself as much as I was expecting. While the film demonstrates a lot of great dramatic moments that Serling is known for, the simplicity of the editing and camerawork really made the piece underwhelming. Certain images had so much potential to be utilized to service the actual plot, but it ultimately felt as if director Fielder Cook relied too heavily on the story’s earlier success as a teleplay.

Patterns tells the story of Fred Staples, an engineer brought into a large industrial company Ramsey & Co. in order to bring about new ideas and policies. He immediately produces a friendship with Bill Briggs, the company’s vice president. As Staples becomes acclimated to the company, he discovers that Walter Ramsey, the company’s president, has brought him on as competition to Briggs. From here, Ramsey begins to play multiple mind games with Staples and Briggs in an effort to force Briggs into a resignation. The film’s conflict becomes a battle between corporate practices and simple human decency.

As I said before, there are so many fantastic dramatic moments written by Serling, primarily between Staples (Val Heflin), Mr. Ramsey (Everett Sloane), and Briggs (Ed Begley). Each actor delivers his lines well, establishing an intense atmosphere in at least five pivotal scenes. While I have not seen the original teleplay, I do know that Everett Sloane plays Mr. Ramsey in both versions, and he is an excellent antagonist. As the story progresses towards a climax, Sloane’s demeanor fits his character’s progression into cold-heartedness. However, because I am so used to Rod Serling’s writing from The Twilight Zone, I was a little disappointed that the impressions the film left on me only came from certain moments. Conflict and feelings of threat are important to the story, but the most anxious moments are too few and far between. Perhaps it is unfair to compare Patterns to The Twilight Zone, but when it comes to timelessness, Patterns just doesn’t feel memorable.

There are many establishing shots that focus on the strange pattern of the office building’s ceiling, which is exactly what I was expecting when I first started watching the film. I wanted them to play with patterns, both visually and mentally. However, as much as I can draw parallels between the film’s basic plot and the building’s interior pattern, there just wasn’t quite enough of the visual pattern for me to care to make the analysis. In fact, for a film to be called Patterns, I am almost offended that they did not use footage of any visual pattern in more creative ways. The pattern I am referencing is arabesque, and it is only found on the ceiling of Ramsey & Co.’s ground floor. Within the executive suite (where most of the film actually takes place) there are hardly any patterns at all; each employee’s office is either drab or decorated with detailed murals. Granted, the word pattern’s origin comes from the Latin “patronus” meaning “leader,” which makes a lot of sense given the film’s central conflict. But when I watch a film, my expectation for visual stimulation becomes higher than normal, and the word “patterns” made a promise that was not kept within that logic.

Ultimately, the film was very easy to sit through, and it does make me curious to seek out a copy of the original teleplay to see what was cut from or added to it. I am just not impressed with the visual creativity of this film. Really, this makes me think that the film was made only to capitalize on the success of the original teleplay. The adaptation may have expanded on certain ideas, but did not take take advantage of the extra time in a visual sense.