Posted in: The Reel World by Archive Authors on October 1st, 2016 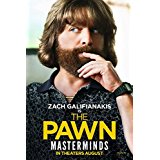 In 1997, $17.3 million dollars (or $25.5 million adjusted for inflation) was stolen from Loomis, Fargo & Co in Charlotte, N.C. It was the second largest cash robbery on U.S. soil after a Loomis Fargo armored car robbery by the driver earlier in the same year for $18.8 million in Jacksonville, Florida. The facts of the robbery and subsequent events are pretty ridiculous, and now Hollywood has made an out-and-out silly farce out of something that in reality was a silly farce. After having seen the movie, I tried to compare actual events with the insane stupidity that happened in the movie. That was actually my biggest problem with the movie. If they had tried to adhere closely to reality, it might have played funnier.

Masterminds was directed by Jared Hess (Napoleon Dynamite, Nacho Libre) who has disappeared after his last two movies tanked. Almost everyone would agree that Napoleon Dynamite is a brilliant comedy. It is inspired from start to finish, but it was a small independent film, and now he’s directing a much bigger budget film. The film stars Zack Galifianakis (The Hangover I, II and III), Owen Wilson (Night at the Museum I, II and III), Kirsten Wiig (Despicable Me I and II, Bridesmaids, Ghostbusters, SNL),  Jason Sudeikis (Horrible Bosses I and II, We’re The Millers, SNL), Leslie Jones (Ghostbusters, SNL), Kate McKinnon (Ghostbusters, SNL) and many other well known crazy comic actors. All these stars are aggressive scene stealers and fall all over each other (literally) to act ridiculous. The main character is David Scott Ghantt (Galifianakis). Almost all the real life names are used, and the actual Ghantt consulted on the movie. Ghantt was one of the few employees of the armored truck company with keys to the vault. He is targeted to be the pawn of a massive robbery even though the movie portrays him as a helpless sap. Steve Chambers (Wilson) manipulates Kelly Campbell (Wiig) to manipulate Ghantt to do 95% of the work involved. Ghantt is not in love with his strange fiancé, Jandice (McKinnon) and falls for Kelly’s halfhearted flirtations which is the main motivation for the robbery. Once the robbery has been successfully achieved (although with enormously stupid stunts and miscalculations before that happens), Ghantt is sent to Mexico with $20,000. Eventually Chambers decides to send a hit man (Sudeikis) who has a pathological pleasure in the execution of his duties.

I found the movie generally worked too hard to be funny. All the acting was lazy and unfocused. Comedy was clearly the priority, but when things get too silly it can produce diminishing returns. This kind of movie should adhere to reality as closely as is possible. Comedy plays better if you believe it. There are laughs, and the film is generally enjoyable, but it could have been so much better. I think the biggest fault lies with the actors, who just seem to do whatever they want. The film is produced by Lorne Michaels, who has produced Saturday Night Live for almost its entire history and has also produced endless films, but this is the kind of film that would have 100 times better if it was done by Martin Scorsese. That may be an unfair comparison, but when you have amazing source material, you shouldn’t dumb it down. This movie is dumbed down to the max, but to be fair, it is being sold as harmless fun. I can’t be too hard on it since it is obviously just trying to entertain, and after all, it is just a story about really stupid crimminals.