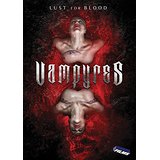 Our new buddies over at Artsploitation Films wanted put some bite into 31 Nights Of Terror. Believe me when I tell you they went right for the jugular by giving us 2 copies of Vampyres on DVD to give to a couple of lucky winners here at Upcomingdiscs. It’s a little bit like the 1974 cult classic but with a few wicked modern edges. This one is not for the kiddies as it contains plenty of blood and some killer female vampires wearing only that blood. The disc includes an interview with star Caroline Munro.

Gino Sassani is a member of the Southeastern Film Critic's Association (SEFCA). He is a film and television critic based in Tampa, Florida. He's also the Senior Editor here at Upcomingdiscs. Gino started reviewing films in the early 1990's as a segment of his local television show Focus. He's an award-winning recording artist for Omega Records. Gino is currently working on his 8th album Merchants & Mercenaries. Gino took over Upcomingdiscs Dec 1, 2008. He works out of a home theater he calls The Reel World. Favorite films: The Godfather, The Godfather Part II, The Body Snatcher (Val Lewton film with Karloff and Lugosi, not the pod people film), Unforgiven, Gladiator, The Lion King, Jaws, Son Of Frankenstein, The Good, The Bad And The Ugly, and Monsters, Inc.
Central Intelligence ( UHD Blu-ray (4K) “31 Nights Of Terror” The Neon Demon (Blu-ray)