“31 Nights Of Terror” Contest: Win Under Wraps From ARC Entertainment 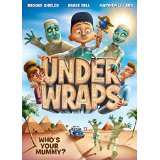 This continues to be a crowded 31 Nights Of Terror contest year. Once again it’s thanks to the great folks at Arc Entertainment. This one is for the kids. Maybe not so scary, but a lot of fun. Arc Entertainment has given us a copy of their zany adventure Under Wraps. The animated feature is loaded with mummies, pharaohs, and other things that go bump in the night. It features the voice talents of Brooke Shields, Drake Bell, and Matthew Lillard. Who’s your Mummy? Upcomingdiscs and Arc Entertainment, that’s who.

Contest is now closed Winner is Ronald Oliver Winners are notified by E-mail. If you did not get a confirmation E-mail from us, check your Spam filter and contact us. Any prize not claimed in 2 weeks will be forfeit and be placed in the end of year contests next Holiday Season.

Gino Sassani is a member of the Southeastern Film Critic's Association (SEFCA). He is a film and television critic based in Tampa, Florida. He's also the Senior Editor here at Upcomingdiscs. Gino started reviewing films in the early 1990's as a segment of his local television show Focus. He's an award-winning recording artist for Omega Records. Gino is currently working on his 8th album Merchants & Mercenaries. Gino took over Upcomingdiscs Dec 1, 2008. He works out of a home theater he calls The Reel World. Favorite films: The Godfather, The Godfather Part II, The Body Snatcher (Val Lewton film with Karloff and Lugosi, not the pod people film), Unforgiven, Gladiator, The Lion King, Jaws, Son Of Frankenstein, The Good, The Bad And The Ugly, and Monsters, Inc.
Reign: The Complete Third Season “31 Nights Of Terror” Contest – Win The Neon Demon On Blu-ray From Broadgreen Productions