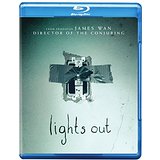 “Everyone is afraid of the dark…and that’s what she feeds on.”

Despite rumors to the contrary, I am a full-grown adult. That means I can’t in good conscience admit to being afraid of the dark. The most I’ll concede is a sense of uneasiness if I’m in a dark space because I might bump into something. And if I hear a strange noise in the middle of the night, my mind might start creating sinister shapes out of shadows. (Hold on…am I afraid of the dark?!) Either way, that primal and unshakable fear of what could be hiding just out of sight is what powers Lights Out, one of the leaner, nimbler, and flat-out most enjoyable low-budget horror flicks in recent years.

“Every time I turn off the lights, there’s this…woman…waiting in the shadows.”

This is usually the part where I tell you what the movie is about, but those 14 words sum things up pretty tidily. Well, except for the part where the creepy woman waiting in the shadows has some pronounced homicidal tendencies. We’re first introduced to her during an atmospheric cold open set inside a mannequin factory, which is one of the very last places I’d want to be if I were to find myself in a horror movie. (Twilight’s Billy Burke isn’t nearly as famous as Drew Barrymore in Scream, but he ably fills the “recognizable actor” slot for the movie’s opening.)

Soon after, we meet Rebecca (Teresa Palmer), a free-spirited young woman who has been estranged from her mentally unstable mother Sophie (Maria Bello) for years. When Rebecca’s younger half-brother Martin (Gabriel Bateman) starts seeing the shadowy woman known as “Diana” in his house, he seeks shelter with Rebecca, who doesn’t even like having her boyfriend Bret (Alexander DiPersia) around all the time. But Rebecca has her own history with the malevolent entity, which begins stalking her in the present day. As a result, Rebecca sets out to solve the mystery of Diana’s origins while protecting her family.

Lights Out is based on a 3-minute short from 2013 directed by David F. Sandberg and starring his wife Lotta Losten. (Fun fact: Losten also appears in the feature film version of Lights Out, and her character is the first who encounters Diana.) Sandberg’s short went viral and caught the attention of Lawrence Grey, who showed it to fellow producer James Wan. Grey and Wan are among the producers of the feature-length Lights Out, and Wan’s horror cred (after directing Saw, Insidious, and The Conjuring) is being used to help sell this film. (Sandberg is also directing a sequel to the Wan-produced Annabelle.)

I’ve actually been a bit critical of the way a handful of recent horror flicks — including some made by Wan — rely too heavily on jump scares. (If I jump out from behind a door and yell, “Boo!” I haven’t created suspense or scared you…I’ve just surprised you.) So I was a little dubious about Lights Out, since it centers around an entity that repeatedly pops out of nowhere. Thankfully, the movie shamelessly embraces its concept — which a colleague rightly noted is reminiscent of the excellent Doctor Who episode “Blink” — and uses simple-yet-effective editing and sound effect tricks (like the sizzling sound of a faltering light bulb) to craft PG-13 suspense.

It also helps that the performances here are a notch or two above what we tend to get in this genre. Palmer makes for a capable, feisty heroine; and in less than a handful of scenes with Bello (with a twitchy, mad glint in her eye), the pair does a very nice job of conveying a sadly strained mother-daughter relationship. I was also quite impressed by Bateman, who plays the part of a spooked (and exhausted) kid exceedingly well. Meanwhile, DiPersia’s well-meaning goofiness is probably the movie’s most consistent source of humor. And stuntwoman Alice Vela-Bailey deserves a shout-out for embodying Diana and helping make her into a movie monster I hope we see more of.

In recent horror history, there have been a handful of films (Blair Witch Project, Saw, Paranormal Activity) that have redefined the genre and spawned a slew of imitators. Lights Out is *not* one of these movies. The characters here are generally as dumb as they are in most horror flicks, and the storytelling isn’t what anyone would call airtight. (Diana can conveniently control certain light sources.)

But with an 81-minute running time — making it about an hour(!) shorter than Wan’s The Conjuring 2 — Lights Out delivers its chills without overstaying its welcome. (Diana’s back story is unearthed and processed efficiently, rather than occupying its own movie ala The Ring Two.)

Lights Out is presented in an aspect ratio of 2.40:1. The 1080p image is arrived at with an AVC MPEG-4 codec at an average of 27 mbps. Considering the movie’s title and the fact that the main antagonist is basically a shadow monster, I popped in this disc from Warner Bros. hoping that the black levels would be spot-on. I’m happy to report that is absolutely the case. Not only are the black levels appropriately inky and foreboding throughout the film — starting with the afterhours prologue at the mannequin factory — there is also tremendous separation and shadow detail throughout. Otherwise, this is your fairly standard and blemish-free HD presentation. Colors (particularly in Rebecca’s apartment) are a bit muted, but the image is overall clean and pleasing.

The DTS-HD Master Audio 5.1 track is as lively and fun as the movie itself. The jump scares are definitely punctuated with some impactful sub activity, but it doesn’t go ridiculously over the top. The best part is the separation throughout the channels: you’ll hear Diana scratching on the floor creepily from your left speaker before you see it, just like Rebecca does in the movie. The score by Benjamin Wallfisch doesn’t crop up all that often, but it is presented as a forceful wall of sound when it does. Really impressive stuff all around.

Deleted Scenes: (13:58) There are three scenes, and the final one is an extended sequence that represents an alternate ending/climax for the film. (It’s at Rebecca’s apartment, as opposed to her mom’s ridiculously large house.) Personally, I feel Sandberg absolutely made the right call sticking with what we saw in the theatrical cut. Presented in HD.

The movie itself remains a fun, suspenseful delight. The one drawback here: I wish this Blu-ray release contained more bonus material. (A commentary would’ve been nice. At the very least, I feel this disc should have included Sandberg’s original short as an extra…seems like a no-brainer.)

Lights Out also features playful doses of ingenuity when it comes to keeping Diana at bay: light sources in the film include a flashing neon sign, a hand-crank flashlight, and…a cell phone. But even though the cell phone probably got the loudest applause when I saw the movie in theatres, make sure you put yours away and heed Diana’s warning while you enjoy this in your own darkened room: “keep the lights out!”