“31 Nights Of Terror” Girl in Woods 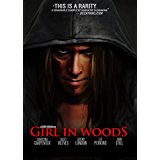 Girl in Woods is a very conflicting film. The writing and direction were wonderful, as well as the setting: I have previously written about my fondness of independent horror films set in the woods (see my review of The Interior). However, the film’s post-production and the acting were not up to par with the maturity set forth by the intricate story and overall tone of the film. The film succeeds in establishing an atmosphere of fear and mania through cleverly fragmenting the narrative through cryptic flashbacks, but it fails to impress with visuals, simply because of poor quality.

Grace and her boyfriend, Jim, enjoy a weekend alone in the woods, wherein Jim proposes to his loving partner. After a few scenes of flirtatious banter from the couple, a terrible accident leaves Grace stranded in the woods alone. The “terrible accident” in question is coincidently linked to a traumatic event from Grace’s past, one that she never entirely recovered from. As the “indoors-y” woman navigates the vast woods by herself, she must overcome both memory and temptation as she tries to survive the wilderness and her own mind.

The most impressive element of this film is most certainly the writing. There are three different traumatic experiences that Grace suffered during her childhood, involving a very vivid nightmare and the separate deaths of her parents. Each element of her childhood is smoothly integrated into the narrative very well. Not only do you see unobtrusive flashbacks, but they are paired with a specific anxiety that Grace is feeling at the particular time in the narrative. It has been a while since I have seen a film use flashbacks so creatively and necessarily, so it was very refreshing. In addition to flashing back to her past traumas, the figure of her nightmare materializes in the woods throughout the film, creating an odd sense of space and time, created solely in Grace’s head as she tries to survive the emotional wrath of losing her boyfriend.

Again, where the film takes tremendous strides with clever writing and experimentation, it just falls apart in other areas. For example, Juliet Reeves does a great job as Grace, but as the film progresses, she plays multiple versions of Grace. Each version has different characteristics, but ultimately those extra characters lend to overacting which becomes a little irritating. It doesn’t help that her inner conflict (that is externalized through these separate incarnations) takes up the majority of the film, and as it progresses, they become more relevant to the narrative (and thus more dialog). While the progressive overacting was there, it was bearable. However, what really detracted from the film was the texture of the video I was watching.

IMDb states that a Red One camera was used to film this feature. I have seen many films that use this camera, and I have seen it being used on multiple occasions (it is a rather affordable high-end video camera, a favorite of college students who dream of getting their hands on one). My point is that I have seen what the camera is capable of, and it looks nice. Girl in Woods had a lot of visual distortion that I typically see in sets with low lighting. That’s just the nature of the beast when it comes to digital video: It can’t beat the low-light footage on celluloid. So I would expect to see some distortion on all digital video. The issue is that I saw way too much: almost as if the film was not rendered properly as it was exported. I saw what looked like low-light distortion during scenes of broad daylight, and it was very distracting.

I rate this title a three because I really enjoyed the writing and direction. It could have received higher marks, but the distortion became such a headache to watch that it really effected how much I enjoyed myself. Regardless, Girl in Woods packs a psychologically traumatic punch for anyone who cares to sit through the film. Video texture aside, I most certainly recommend it to psychological horror fans.