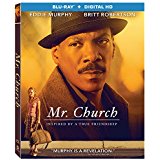 “There’s a black man in our kitchen cooking eggs!”

The kitchen-bound black man in this case is Eddie Murphy in Mr. Church, which on the surface appears to be the latest in a sneakily long line of movies (Driving Miss Daisy, The Help, The Butler) where saintly, subservient African Americans enlighten their white counterparts. Those movies can be cloying at best and downright insulting at worst if placed in the wrong hands. But if done right, they can really resonate with audiences. (As evidenced by the fact that the movies I mentioned earlier were pretty big hits.) Mr. Church falls somewhere in between.

“The following is inspired by a true friendship.”

Charlotte “Charlie” Brooks (Natalie Coughlin) is a head-strong pre-teen who lives with angelic single mother Marie (Natasha McElhone). The story begins in the early 1970s and is told from Charlie’s perspective, so we learn that her mother had a wealthy lover who passed away and bequeathed the services of his cook to Marie and her daughter. That cook is Henry Joseph Church (Eddie Murphy), who whips up delicious meals with improvisational flair. What Charlie doesn’t know initially is that her mother has cancer and has been given six months to live. As a result, Mr. Church has been promised a lifetime wage for what is supposed to be a six-month engagement. It’s no spoiler to say that Mr. Church ends up hanging around Charlie’s life for much longer.

The bulk of the story takes place as Charlie (played as a teen and an adult by Britt Robertson) grows up and comes to depend more on Mr. Church’s friendship and guidance. The film covers Charlie’s awkward high school years (where she pines for a date with dreamboat Owen, played by Xavier Samuel), her going from Los Angeles to the East Coast for college, and returning home to kick off her early adulthood. Throughout the years, Mr. Church remains both a close friend and a complete mystery to Charlie since he fiercely guards his personal life.

Mr. Church is written by Susan McMartin and is based on her real-life experiences. The film found an appropriate filmmaker in Bruce Beresford, who directed Driving Miss Daisy and has obviously been down this storytelling path. (In somewhat of a funny twist, Murphy was reportedly considered for Miss Daisy.) I mentioned before that this sort of movie could easily go downhill if it’s not approached carefully, so I was pleased to see an experienced director like Beresford take on the material. There’s not a lot about the movie that is flashy, but Beresford does bring some jazzy energy to the cooking sequences. The final act introduces some overwrought melodrama, but the truly tear-jerking scenes are presented in a refreshingly straightforward way.

To be fair, Mr. Church can’t help but fall into some “magical negro” pitfalls: not only is the character an excellent and soulful cook, but he’s also a supremely talented piano player, painter, and an avid lover of classic literature. (Mr. Church infuses a love of reading into Charlie.) The movie also telegraphs certain events from a mile away. For example, as soon as we meet the depressed, down-on-his luck guy (Christian Madsen) who has lost his license because of a DUI conviction, we know he will be pressed into driving at some point. (He’s basically “Chekhov’s hobo.”) Of course, the most annoying thing about this type of movie is how they purportedly tell stories about African American life, but ultimately end up focusing on the white characters.

Mr. Church is up front about the fact that — its title notwithstanding — the story is actually about Charlie’s experience and her point of view. In fact, Mr. Church’s inscrutability and mystery are an essential part of the story. The “mystery” surrounding Mr. Church is never blatantly revealed, but the movie offers some strong hints and nudges as to why he is so private.

In the meantime, the film serves up warm performances and a welcome low-key turn from its star. It’s easy to overlook the fact that Eddie Murphy hadn’t made a movie in almost five years. His comedic persona has seemingly fallen out of favor with audiences and so have the dreadful family paychecks movies he was starring in. So this is actually a great time for the actor to pivot and try a serious role…and Murphy absolutely pulls it off. As I said, Mr. Church’s privacy is an important part of the story and Murphy’s star charisma hints at the personality and spark the character masks with his unfailing manners. It’s a soft-spoken performance that makes the moments when Mr. Church does blow up more powerful.

Charlie is actually a trickier role to nail. She’s our protagonist and guide through this story, but she’s also occasionally bratty and guarded due to some abandonment issues. So it’s occasionally hard to get behind Charlie and Robertson’s performance, especially when you contrast it with the graceful work done by McElhone as her mom. The baby-faced Robertson does solid work all around and is especially good as we see Charlie mature and essentially switch roles with Mr. Church. It ends up being a low-key but satisying arc.

Coincidentally, that’s also how I’d describe the movie itself, which goes down like a hearty, comforting home-cooked meal: I know it may not be the best thing for me, but I enjoyed it nonetheless.

Mr. Church is presented in an aspect ratio of 1.85:1. The 1080p image is arrived at with an AVC MPEG-4 codec at an average of 36 mbps. To be honest, this presentation doesn’t make a great first impression. In the early 1970s scenes, the image is routinely soft during medium shots and features some distracting noise. I wondered if things would clear up as time went on in the story, and the answer is…mostly. Yes, the presentation becomes markedly cleaner and more vibrant by the end of the film. However, the only moments that truly pop are the food close-ups that exhibit some impressive fine detail. Flesh tones are consistently warm throughout, which makes this a pleasing yet unremarkable visual experience.

The DTS-HD Master Audio 5.1 track is dialogue-driven to be sure. This is the kind of low-key drama where the most explosive sonic sequence is…when Charlie goes to prom. (We get some dynamic and impactful rear speaker activity during the dance.) Speaking of music, Mark Isham’s uplifting score is presented in an unobtrusive manner and nicely filters out throughout each channel when the music swells. But again, dialogue is king here and it is presented completely cleanly.

All of the bonus material is presented in HD. There are four featurettes that can also be viewed in one chunk (12:35).

Britt Robertson: (3:52) The actress talks about being attracted to the project because of the unconventional family at the center of it. Producers and fellow cast members also offer plenty of praise for Robertson’s performance.

Eddie Murphy Doing a Drama (3:56) Coincidentally, “Eddie Murphy Doing a Drama” was the original title of this film. All joking aside, this featurette focuses on the unprecedented seriousness of Murphy’s work here. Although Murphy earned a well-deserved Oscar nomination for Dreamgirls, Mr. Church is both smaller and more serious than any movie the comedy superstar had ever headlined before.

Food on Film: (1:14) Murphy bemoans the fact that most of the food we see on camera wasn’t particularly edible. (It just photographed well.) The actor also reveals he’s not much of a cook.

Based on a True Friendship: (3:31) Focuses on screenwriter Susan McMartin, whose experiences serve as the basis for the story. We learn Mr. Church’s affinity for art is what helped inspire McMartin’s writing career. Actually would’ve liked for this particular featurette to be a bit longer.

Either way, if you’re in the mood for something more low-key from Murphy, give this one a look. After decades of mugging, this sort of dramatic turn actually looks pretty good on him.

Our Kind Of Traitor “31 Nights Of Terror” Girl in Woods