Posted in: The Reel World by Jeremy Butler on October 29th, 2016 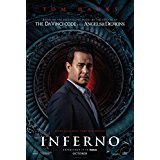 “Mankind is the cancer of its own body. Do you love humanity enough to save it?”

I remember when I was first introduced to the character of Robert Langdon. I was a late bloomer to the story, not having read the book. My first introduction came from the film. I had just graduated high school, and instead of engaging in the customary family dinner that usually precedes the event, I opted in favor of going to the see The Da Vinci Code. That is a decision that I have never regretted. Fortunately, I didn’t need to skip anything important to see Angels and Demons, and it is a good thing, as the film missed the mark with me. Now here we find ourselves on the cusp of Langdon’s redemption with Inferno.  Will the third film in the trilogy be enough to make people forget about the second one? Is Tom Hanks still convincing in what is becoming one of his most recognizable roles?

Robert Langdon (Tom Hanks) finds himself in the middle of another conspiracy, this time one that can have grave consequences for the masses unless he can again solve a puzzle, this time involving the infamous Dante, who shaped our conception of what hell is. After waking up in a hospital in Florence with amnesia regarding the last 48 hours, Langdon finds himself fighting against the clock to locate a plague capable of wiping out a large number of the world’s population. Aided by Dr. Sienna Brooks (Felicity Jones), he must solve the puzzle and battle fanatics loyal to the dead architect (Ben Foster) of the pathogen.

All right, so Inferno does not rank above The Da Vinci Code in my opinion (the original is almost always the best), but it does outrank Angels and Demons. In fact, I would go as far as to say that Inferno is the true sequel, while the other is better forgotten. The role of Langdon appears to fit Hanks like a glove, as he easily falling back into the mannerisms and quick wit of the character despite the years’ gap between the movies. He is also the only constant in the franchise, being the only returning a character, which makes the steadiness of his performance all the more important.  That said, an excellent crop of actors, including Omar Sy, Ben Foster, Felicity Jones, and Irrfan Khan surround Hanks to serve as both allies and adversaries. Which is which, you say? You’ll have to see the movie for yourself to know for sure.

The story was engaging and entertaining, albeit predictable in regards to its later plot twists. There remains the potential to catch a newcomer off guard, but a seasoned veteran like myself knows to expect the unexpected (OK, you got me, I read the book). Visually the film is both beautiful and terrifying; the landscapes afforded me an opportunity to see places that I can only hope to see in person one day. On the other hand, there are multiple instances where the audience is treated to pull back the curtain and get a glimpse of what hell looked at to Dante. Let me tell you that those glimpses are surreal.

To talk more about the performances, this time more in regards to chemistry, I’d say that the cast really seem to fit their roles quite well, specifically Sy, Khan, and Jones. Sy is an actor that I have been seeing more and more of lately, and with every performance, I hope to see him again. This time is no different; as a dogged agent for World Health Organization he shows his mettle with the back-and-forth between him and Jones and Hanks. As the female lead, Jones has some big shoes to fill, and though she does outshine the actress who came before her, she demonstrates that she belongs among the women in Langdon’s life, as she keeps the eidetic professor on his toes. Finally, there is Khan, who is a bit mercurial; it is obvious he has his own agenda, but despite his ruthless nature, he brings a quick wit that just makes it impossible not to like him.

Inferno is the sequel to The Da Vinci Code that we always wanted and delivers enough mystery and action to keep the audience hooked. Definitely worth a watch, especially during the Halloween season. What better season to get a glimpse at hell?

Jeremy Butler is a film school graduate of the International Academy of Design and Technology. He is been writing for Upcomingdiscs since 2012; however, movies have played a big part of his life for much longer. Favorite genres include horror, science fiction/fantasy, and comedy. Favorite movies are V for Vendetta, Boondocks Saints, Kiss Kiss Bang Bang, and The Godfather.
“31 Nights Of Terror” Girl in Woods “31 Nights Of Terror” Tales Of Poe